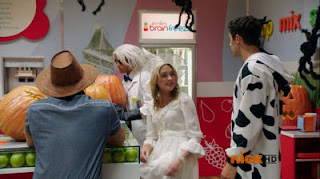 Emma is making a pumpkin pie at Ernie's while the others carve pumpkins. Noah makes a good one that looks like Einstein. Noah is dressed as a mad scientist, Ernie as a pirate, Troy is a cowboy and Gia is a white witch. The lights in the mall goes out thanks to a new monster called Glytcher (who looks like who we in "Ultra Power") The lights come back on. Jake comes running in as a cow, pulling the others to go see a fortune teller. Inside the tent, the room is bigger. Gia holds tight to Jake. A cloaked medium tells them there is someone with a crush. Gia and Jake pull apart. He shows them when the virus monster turning people to Loogies. 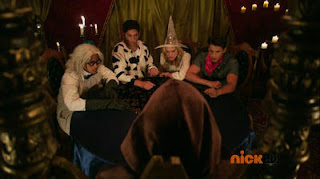 The cloaked guy is confused. Noah hopes he doesn't figure they are Rangers. Ernie tries eating Emma's cake mix. Then visions of another monster (the running guy) and then the UFO one that captured people. Troy was sleeping and is knocked down from his chair. Cloaked guy chastises Troy, telling him that he has to stay awake in order to keep the connection to the Spirit World. Cloaked guy says the voices sound familiar. The cloaked guy feels bad for the monsters. Then we see clips of Creepox fighting Red and Blue. 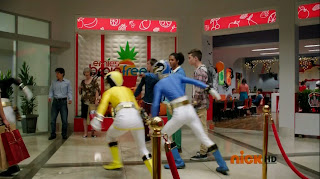 Cloak-y is glad Creepox wins until Red defeats him He tells them that they are not the only one to have a secret identity. He takes off his cloak and reveals to be Glytcher, cousin of Gremlin, the monster they defeated among others in Ultra Power. Glytcher goes running out of the mall, scaring people, saying "Unhappy Halloween." Gia punches Jake's shoulder, saying she knew he was a creep. He clutches his shoulder. They morph, knocking down the tent and running out as Rangers As Gia pours the mix in the crust held by Ernie, she drops it. Glytcher goes doing glitches, making a truck go haywire and Robo Knight arrives to stop it. The Rangers reunite with RK. 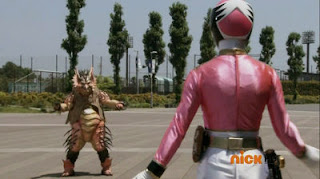 There is a traffic jam because of a broken fire hydrant and the Glytcher comes out near the Rangers. He jumps around the city. The Rangers corner the monster. Emma puts the pie to bake and tells Ernie 30 minutes and she has to go, she runs out. The Ranger's attacks just tickles him. RK asks about Pink, they tell him she is busy, he says that saving the Earth is the number one priority. The Rangers run after Glytcher. Troy shoots Glytcher on a street lamp, he hops away. Troy uses a Twisttorando card, that knocks Glytcher down Red, Black and Yellow fight him in the park. Blue and RK arrive. 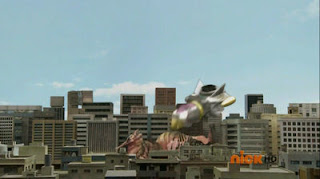 He runs off, they go after him, he blasts them down and Pink arrives. Pink comes out with a bowl of flour and dumps it on the monster, saying it is for ruining Halloween She puts the bowl on his head. She knocks him out. The Rangers applaud her. They do a quick roll call. She calls the Sky Brothers, Phoenix and Dragon and they use them on their blasters and destroy the monster. Zombats make him big and they call the zords. Phoenixzord tickles the monster, which is his weak spot. They form Sky Megazord. Robo Knight becomes Lion Mechazord and forms Gosei Grand. They do a dual attack and destroy the monster. They celebrate in regular clothes with Ernie's pie at the Juice Bar. Ernie didn't follow the instruction, the pie blows up in their faces. 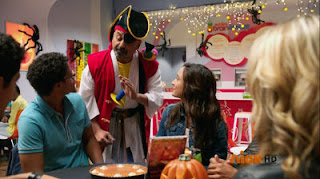 Review:
Even though a clip show, it had funny moments and some development on the Jake/Gia front and also we get to see the mall connected to the juice bar. I liked that they at least acknowledged that the Glytcher costume had been seen before and that it is his cousin. At least it is not like last year's disaster of "Trickster or Treat' with no original footage at all.
Posted by Lavender Ranger at 1:31 PM