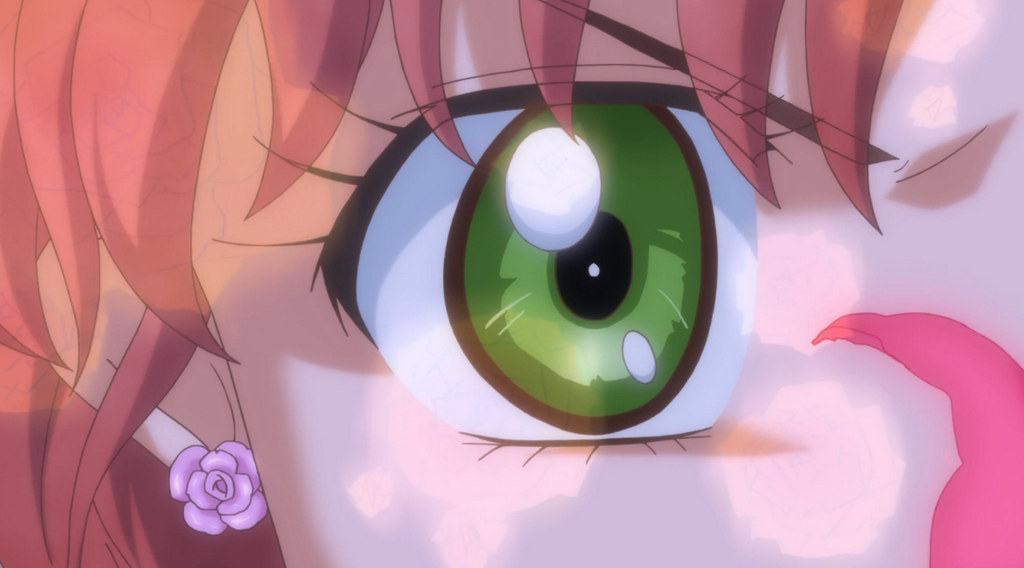 It is raining and Usagi yawns under an umbrella and Luna speaks of awareness. Usagi almost gets run over by a car and a tall girl in a tan sailor uniform and rose earrings saves her. The girl tells her to be careful and leaves. Usagi says she smelled nice. Nephrite tells Beryl he will target love. At school, Naru shows Usagi and her friend a picture of Naru in a bride dress. She says that her cousin and her groom were not present. Umiko says that maybe the groom was kidnapped as there has been missing men because of a 'Ghost Bride' at a bride shop. They notice Makoto, a teacher asks why she doesn't have her uniform and she says it doesn't fit her. Umiko says that she was kicked out of her other school for fighting. 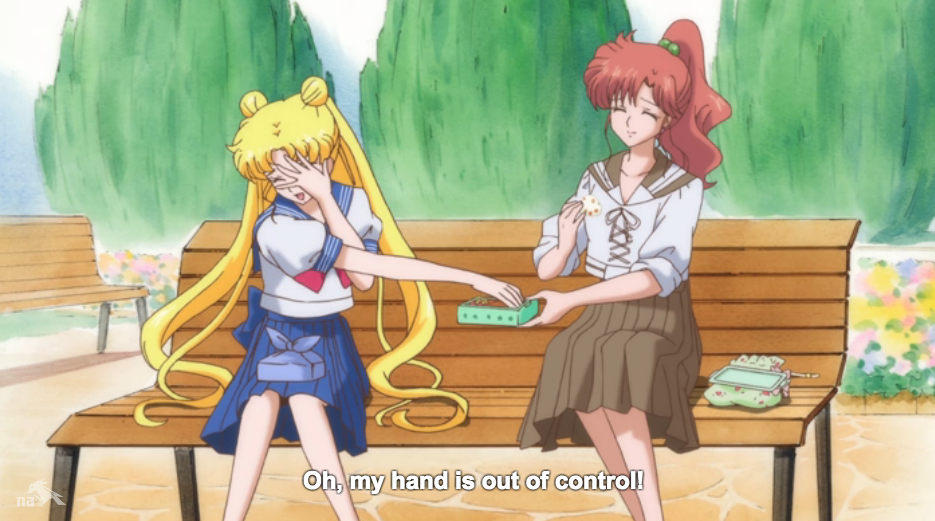 At lunch, no one sits with Makoto and she overhears them talking about her so she moves outside where she is spotted by Usagi who likes her cooking and the purse she made herself. Makoto catches a baseball and throws it super far. Makoto and Usagi strike up a friendship. Makoto says she lives on her own and that everyone is scared of her, Usagi says they are crazy because she is a cool girl. Ami finds them at the Arcade where Makoto does well in the Sailor V game until she spots Motoki, who she says looks like her Senpai (an upper classman she loved). Usagi gives Mako-chan a nickname. Ami, Usagi and Makoto go check out the Bridal shop everyone talks about. They talk about what bridal dress they'd love, Ami wants a white kimono and Makoto says whatever her husband wants. 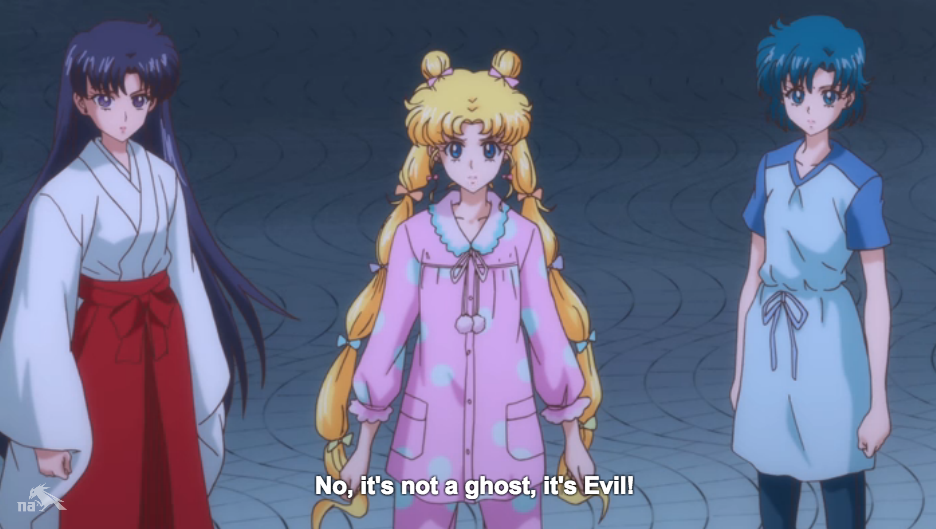 They go to Rei's temple where a woman prays for her boyfriend back. Rei gets an aura off Makoto and when Makoto leaves, Rei says she feels she will see her again, Luna has the same feeling. Before that, Rei says she doesn't trust men.  At night, the bride mannequin comes to life. Motoki closes up his shop and encounters the mannequin who hypnotizes him and makes him do her bidding. Makoto is walking home when she encounters Motoki, who touches her face and tells her that he loves her. Mamoru walks by and notices this and notices an evil aura around Motoki. Usagi dreams in a fog and spots Tuxedo Mask when she opens her eyes and follows him. Luna calls the others. 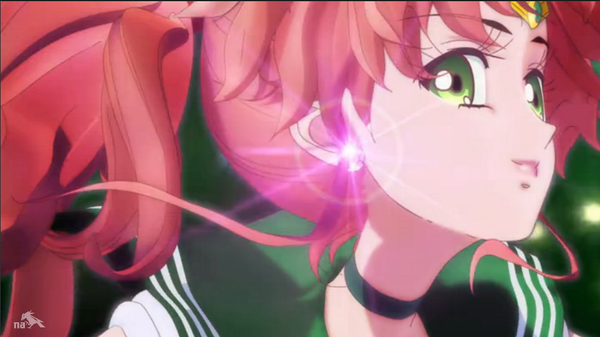 Usagi runs at night and spots Motoki and Mako-chan, the three girls gather and find the 'bride ghost.' She is taking energy. Usagi, Ami and Rei henshin. Moon, Mercury and Mars introduce themselves. The bride throws pedals and wind. Rei fights with fire. Nephrite appears, Luna says he is controlling her. Mako-chan realizes she was tricked. She remembers talking to her Senpai and finding out that he had a girlfriend, she felt betrayed. She then feels like love isn't worth it. Nephrite says love is superficial. Usagi corrects her and tells her love is important. She believes in love. Tuxedo Mask listens to this from a corner. Usagi pleads to Mako to listen to her. The monster attacks and eventually the three go down. 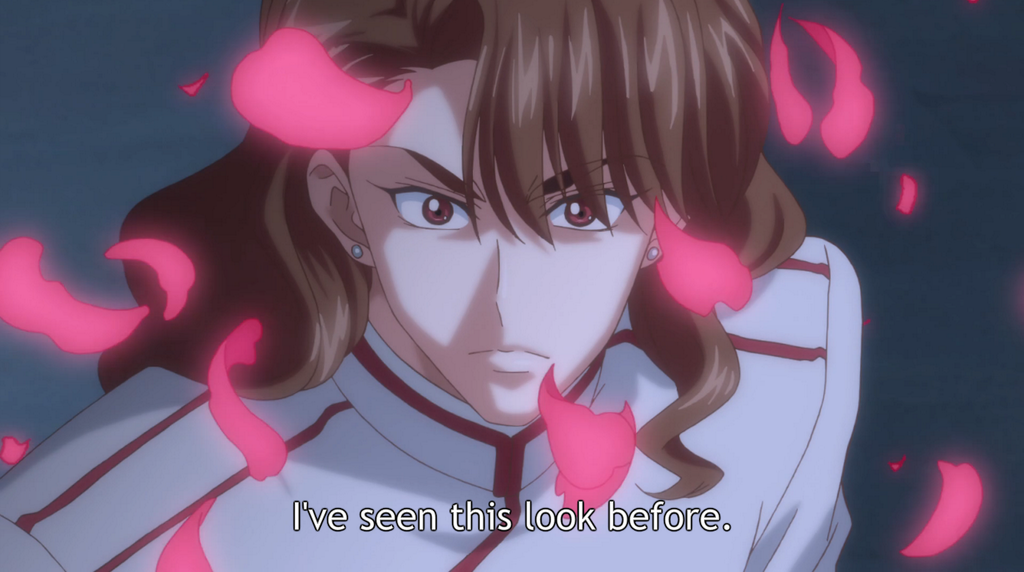 Mako flips the monster and the Jupiter symbol appears on her forehead and Luna gives her pen and she transforms into Sailor Jupiter, introducing herself. She conducts Flower Hurricane (which freezes the two) and Nephrite says she looks familiar. She then does Jupiter Thunderbolt, destroying the monster. Nephrite teleports away. The three Senshi are free. The men wake up including Motoki. Tuxedo Mask runs away, Luna wonders if he led Sailor Moon there. Jupiter explains to the others why she came to a new school, because of her Senpai. Jupiter says the wind told her of her future, she likes her new mission, that it is more important than finding love. There is a glow, the four turn around, Luna says now there is four, Sailor Moon must be the leader and she has the Moon Stick. 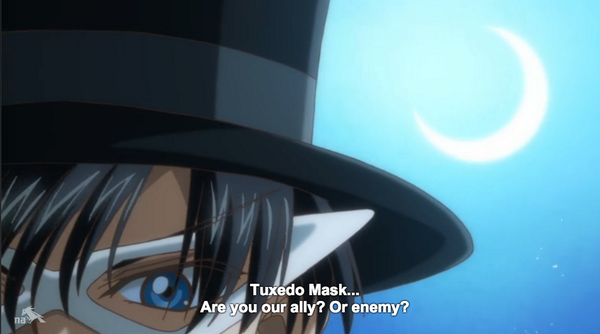 Review:
Not perfect but a vast improvement. I feel like they stuffed every aspect of Makoto (her height, people afraid of her, her love for her Senpai, seeing her Senpai in Motoki, her cooking, and even her wanting to be a bride) in this episode in a sloppy way. But I was very happy to see Flower Hurricane! I did like that the REAL reason she elf her last school was in a flashback and kept until the last scene. I also find it interesting that we are not seeing Sailor Venus yet. The first episodes felt like they were just introducing the characters in a very manner of fact manner. I was also wondering why Nephrite was still around since he was usually killed before Jupiter was introduced but it is part of hinting on relationships between the Senshi and the Shittenou like Naoko Takeuchi's canceled plan of connecting Nephrite and Makoto.
Posted by Lavender Ranger at 10:21 AM