This took me like 3 hours. ( ) is the Japanese name. [ ] is if available in stores yet. There was around 77 Dino Chargers on display! 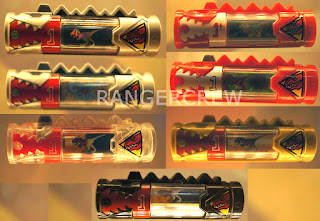 Clockwise: Super Turannosaurus (Carnival) with 1+ and all red [New, not released yet], All red Tyrannosaurus [Scheduled Fall Release], Gold plated one [New, unreleased], black plated one [Special at the Con], translucent one [Released, Megazord], fossil [Released] and regular [Released]. 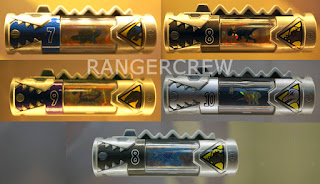 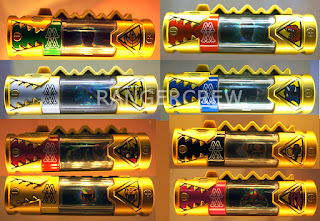 #14 Styracosaurus and #15 Allosaurus
Top Row: Regular, Fossil and Translucent Magenta
Bottom Row: Not sure which is the Fossil one and the last is Translucent Scarlet.
[Fossil and Regular scheduled release soon, released in some locations and the clear ones scheduled for Fall]

#17 Seismosaurus and #18 Oviraptor
Left to Right: Regular, Fossil and Translucent. In a promo pic, the Seismosaurus originally looked purple and not indigo, here it looks more Indigo.
[Fossil and Regular scheduled release soon, released in some locations and the clear ones scheduled for Fall] 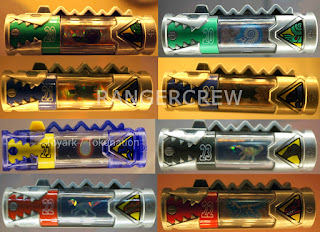 #20 Amnoite, #21 Archelon, #22 Fukiraptor, #23 Futabasaurus
Regular and Fossil except for Futabasaurus. And also Archelon Translucent (pic from Tokunation and not Rangercrew).
[Amnoite will be released soon, Archelon scheduled for the Fall, Fukiraptor in some locations and Futabasurus is new and unreleased]

X (the last 5 guardians), V (the first five guardians) and SD one with a ranger in it.
[New, Unreleased]

Not present at the con:


Since #23, X, V and SD doesn't seem to be connected to any pack yet and Pleiosaurus and Brachiasaurus seem to not be released until season two Supercharge, it looks like those Dino Chargers won't come out until then. Also, it is safe to save there will be other versions of #7-10 Ankylo, Pachy, Pleio and Brachiasaurus and also 11 and 12. It is strange that #13-19 and 21 have translucent versions but #20 has a solid color and not translucent and #21 has no solid but #13 has both solid and translucent. Also strange 2-4 has translucent Ranger-color but #1 doesn't.