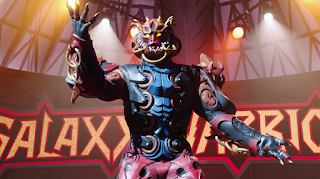 Episode Summary:
Spinferno is introduced in Galaxy Warriors, who is runs fast on wheels. Redbot and Mick work on a Ninja Strar and put it in a prism and give it to Brody. They present the Element Stars to the Rangers in new ninja uniforms. Calvin is given the water star, he puts it in his sword and it doesn't work. He is then blsted across the junk yard and crashes. Brody asks who wants to try fire and the others disappear. Later, the gang leave the hideout and go to class. Preston gives Brody a bookbag. Brody gets info on Spinferno on his datacom, he goes without the others. 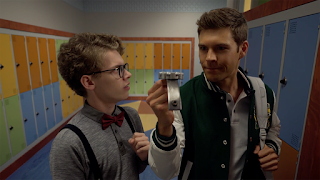 Red Ranger fights Spinferno at the plaza. He asks Datacom what to do, she tells him to hold him with chains, which he does but it doesn't work. He does a water attack to make him retreat. Brody runs off to class while some kids video taped him. Preston is mad that Brody didn't tell them. Victor wants more views, he wants to compete with the Rangers. Sarah berates him, he tells them with smiles they had to study. The teacher arrive and introduces Brody quickly and goes on to the quiz. Brody wants to use his datacom, Sarah tells him no. He uses it anyway. Victor figures out he is cheating. The teacher asks what it is, Brody tells her and she tells him she doesn't want to see it again. The datacom falls out of his bookbag and Victor gets it. 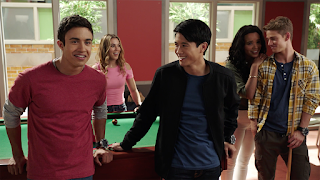 Victor asks how he can become more popular and is told he needs to defeat a monster. Later at the cafeteria, Hayley tells rody how he shouldn't use the Datacom. The monster is attacking again, Brody finds he can't find his datacom. The others leave without him. Victor and Monty arrive in ridiculous suits in front of the monster. A fire extinguisher backfires on Victor. The monster blasts the Datacom and spins the other two away. He recognizes the Datacom and the other Rangers arrive. Mick scares Brody as he was looking for Datacom. Mick tells him the Datacom didn't give him the courage to lead. Brody figures it out and runs out. 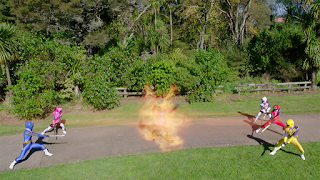 The Rangers are losing. Brody arrives and morphs, they introduce themselves and fight the Kudabots with their Ninja Star Blades. Brody and Preston fight Spinferno. Spinferno throws fire at them. Teh two go down. The others arrive and Spinferno retreats. Bordy tells Calvin to go and they will trap him. Brody says they will use the elements. Yellow kicks Spinferno and tells him to race. He offers his star. Clavin races with the water attack. Spinferno is ahead when the others corner him and do forest attack and wrap him in vines. They use fire attack and final strike him away. They decide not to make him big but they release a Skullgator. The rangers call the zords. 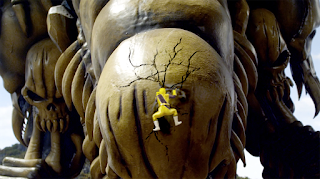 Yellow spins around and hits the nose with his blade. The Rangers go down and make Megazord. They enter the cockpit. They get another Ninja Stars and activate Ninja Master Mode. They gain Ninja Master Mode. They destroy the monster. Galavanax is mad. Cosmo says the crowd likes the megazord. Back at the Snack Stop, Brody gives them new Ninjacoms for apologizing for relying on his datacom. The datacom broke connection to the ship. Victor and Monty watch their epic fail on video remix. Victor is happy because he has more views than the Rangers. 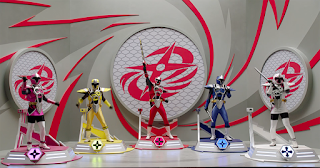 Episode Review:
It was a great episode as it dealt with character development and tied in Victor and Monty. While they gave a reason to the Elemental Stars but again, we are treated to a zippity-do-dah explanation to the Megazord cockpit, And we are treated to yet another Red Ranger episode when it was clearly a Yellow Ranger episode from Ninninger. It would have been great to have a Calvin episode to get to know him and maybe a clear indication if he and Hayley are in a relationship or not. Many fans complained how Troy was just a blank character and robotic but I don't like how Tyler and Brody are too smile-y. Even when they do something childish, they just justify it with a shrug and a smile. I can go on how Tyler baby-cried to Shelby when she said he might not find his dad. And Shelby didn't even do it in a big sister is punishing you manner but in a rational manner.

Posted by Lavender Ranger at 12:46 PM