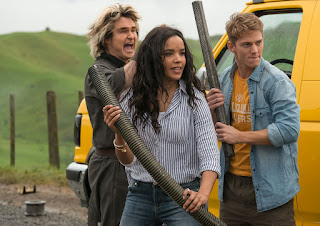 Summary:
Calvin and Hauley are in  their yellow truck with their dog Kody. Calvin and Hayley find fallen equipment from the ship and Mick, finding out about aliens and Galaxy Warriors. They fight Bashers. Galvanax is upset that teenagers have gotten the Ninja Stars. He decides to get a contestant to destroy the Rangers. Calvin, Hayley and Mick arrive to the school's shop class. Principal Hastings mistakes Mick for the new shop teacher. Victor and Monty arrive with his car all newly painted but gets painted on. 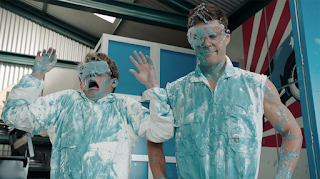 Back at the house, Brody freaks out that Aiden isn't home. Sarah reassures him. He looks in his dad's workshop and digs up to look for it. Sarah sees trophies. Brody tells them the dad melt the ninja steels and made them into throwing stars. He disappeared when he destroyed the prism. Redbot finds an empty box. They see a pic of the dad's trophy so they figure it is at the school as he went there. Brody thinks AIden put the ninja steel inside the trophy. Ripperrat is sent down to get the trophy. Brody destroys one of the spy bots. Brody tells Mick to look for the trophy. 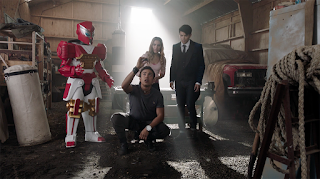 Mick, Calvin and Haykey find the Ninja Steel. Ripperat arrives and attacks Mick. Calvin and Hayley fight him with sporting equipment. Ripperrat breaks Mick's datacom. The prism knocks Ripperrat out and Calvin and Hayley pull out the Ninja Stars. (Gold is missing) The Prism flies off. The Rangers arrive and introduce each other. Ripperrat arrives again and the five morph. They fight Ripperrat. They try the different attack modes of the morphers like bow mode, claw, and blade mode. Red does a final attack and blows it up. They 'gigantafy' Ripperrat. His chain arms are jammed. The prism shows them their zords. Mick takes out the throwing stars and throws them into the prism, making them stars to call their zords. 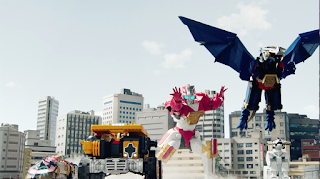 They summon the zords and give them names like Robo Red Zord, Dragon Zord, Zoom Zord, Nitro Zord and Codiac Zord. They fight Ripperrat. They blast him and destroy him. Back at the school, they hide the prism in the paint booth as it is broken and since Mick is the shop teacher, no one will question a thing. Brody is happy he gets to go to school and apologizes for getting them involved. Mick says it wasn't an accident, he says he heard legends. Back at the ship, the host says ratings are high. They realize the Gold Ranger star is missing. Unfortunately Madame whats-her-name (Odium?) has it. 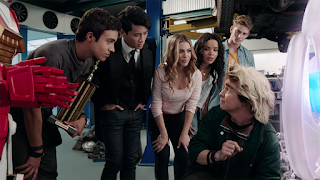 Review:
It is a shame that Redbot doesn't become the Robo Red Zord, missed opportunity. I didn't like the thing of the Rangers naming the zords as it just relied on things they liked and nothing to do withe personality nor character development. All was missing was Preston to call his "Magic Dragon Zord." Good episode, it ties everything up in a nice bow but they use Power Rangers logic like why the Principal didn't check the name of the teacher and just assumed it was Mick. Also, did Aiden return home after he left (when Brody was kidnapped) in order to leave clues? Also why he left the house unlocked?

Posted by Lavender Ranger at 3:09 PM