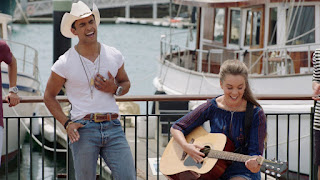 Madame Odius makes a musical spell to make a Ranger evil and gives it to Spyclox. A girl sings a song with a guitar by the boats. Victor and Monty give her change. Victor flirts. She tells him e is not her type. He changes and dresses in disco and then a bullfighter. He then changes into a tennis player. He says he will figure out what her type is. The Rangers come and the girl sings one of Levi's songs. Levi starts to sing along with her. Everyone applause. She introduces herself as Jess, she is starstruck. Victor has an idea about cowboys and leaves. Monsters arrive and Levi takes Jess somewhere safe. The others morph and fights the grunts. Yellow clones himself. Pink uses her arrow to take a bunch down. Jess takes down one of the grunts. Levi asks to catch up later. 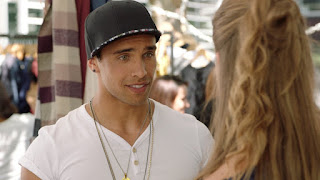 Jess turns into Spyclox. Meanwhile, Monty is making a cowboy cologne for Victor. Jess and Levi hang out. She gets a baseball cap and puts it on him which he is not sure about. She convinces him and he changes his look. She shows him a new song she wrote. The others train. Levi comes late with his new outfit. Preston says he swore he heard those lyrics before. Levi starts singing the new song and people don't like it and start leaving. Redbot gives Preston his magic book. He found the song and it is a symmetric spell, Levi will turn evil if he finishes the song. He finishes the song and his eyes turn red. He keeps plying the song. Victor and Monty arrive, Victor as a cowboy and Monty sprays the cologne and nobody like sit. Jess becomes Spyclox. 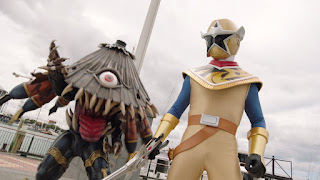 The others arrive. Levi asks for their Power Stars. Hayley wants Preston to reverse the spell but Preston needs the sheet music which Levi shreds. He becomes the Gold Ranger. The others morph. The Rangers fight. Calvin picks up the sheet pieces. Pink fights Spyclox while the others fight Gold. Levi is about to blast them when Pink blasts him. Calvin puts the lyrics together. He sings it backwards and the spell breaks. Gold hopes he hasn't hurt anyone. He can't believe Jess is a monster. She runs away. In a quarry the seven face off. She flies and attacks. They do attacks and jump in a tornado to strike her. They make her giant. The Megazords are called. They don Ninja Super Steel mode. Brody calls the Astro Zord which knocks her down. They make the Ninja Fusion Zord. Red gets the blaster. They destroy her. Red makes fun of Gold's new look. KLEvi comes all shy like a cowboy again and says he should've listen to them. They say they love him. Victor comes na dhe stinks, everyone puts plugs on their noses. 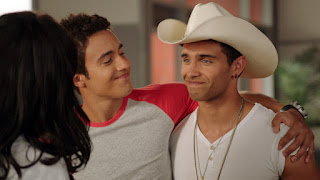 Episode Review:
This episode is so cliche and routine, it is boring and borders on mean parody. Chase and his girlfriend's storyline almost deconstructed it last time with Dino Charge. What I don't like is they gloss over the fact they shouldn't trust anyone because they might be a monster.
Posted by Lavender Ranger at 9:00 AM