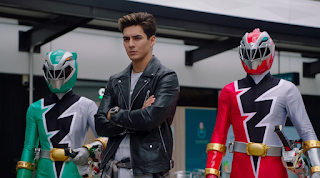 Javi's dad gives him a hard time about being more focused and not going from instrument to instrument. Dad wants him at a medal ceremony. Javi meets a roc band leader who is a jerk and has a dino key. He doesn't want to keep it. At the monster base, Santuara wants to know why Tarrick has her hide. He tells her the other villains only respond to him with the helmet. The Zord Jammer is ready to block zord signals. A sporix is released and Doomsnake returns. Javi tells Zayto about the key and he says it is the Freeze Key. They go to the lead singer of the Screaming Zombies with the rangers. They convince him to give the key if Javi plays guitar, but it is during the medal ceremony. Izzy makes up an excuse for their dad. Javi plays a guitar solo. The other Rangers enjoy the concert. Izzy watches Javi on her phone and Javi's dad doesn't like it and leaves in a huff.

The lead singer gives Javi the key. Javi's dad Carlos berates him. Javi calls him a hypocrite, he says Carlos doesn't support him. The Rangers leave. Jane defends Javi and shows Carlos the concert with Javi's talent. The Rangers arrive near the zord and find large rocks. The rocks glow. The villains arrive. Red uses Hyper DIno Key and fights Void Knight. Aiyon joins in. Black and Green fight Doomsnake. Izzy tells Javi to go, Javi calls the SMash Dino Key and pummels the rock to reveal the zord. Zayto uses the freeze dino key and dons the armor. The zord flies out after the Zord Jammer. The Zord Jammer shoots lasers back. The zord freezes it. Red goes flying. Doomsnake fights Javi. Javi does Fury Smash and destroys it. 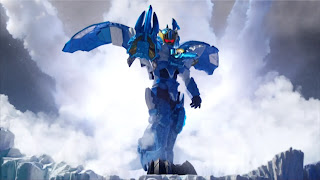 Izzy got the Sporix. Aiyon fights Shipwreck. The monsters leave. Pterazord and Zayto meet. Zayto makes it go to Battle Mode. They enter the cockpit. Ptera Freeze Zord Battle Mode! Everything becomes icy. They face off against the Zord Jammer. Zayto calls the Mega Fury Saber and they do the Freeze Strike and destroy the Jammer Everything returns to normal. Back at the base, the monsters discover the machine is on. Void Knight stops it and goes in his secret room. He finds Santuara glowing and she transforms into a monster form. She appears in front of everyone and says her name is Void Queen, with new powers. Tarrick looks concerned. Back at Buzzblast, Izzy applauds Javi. Javi sees his dad Carlos come in. Carlos says he saw his performance and says his guitar playing is impressive. He thought about what he said. He always thought music was a waste of time and realized he was too hard on him. He says he will change. Javi says he was playing it for fun, he realizes he might want to make a career out of it. Carlos says he will be behind him every step of the way. They hug. 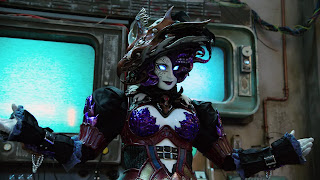 Review:
A pretty by the numbers episode. All I can say is that the monster costume for Void Queen is Madame Noir from Toqger, a sentai that has not been adapted into Power Rangers. Cosmo Royale was also a villain from Toqger.

Posted by Lavender Ranger at 10:28 AM