I thought it didn't have to come down to this. 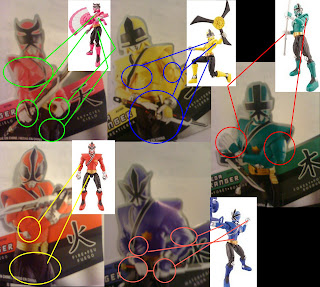 But here you go. Some people believe these are pictures of sophisticated toys or the toys in more-detailed costumes. Some think they are suits but just used for the photoshoot. Some people still think they are just toys. I firmly believe these are suit actors in real suits. You can tell by the wrinkles on the upper arms and torso is fabric. Click the picture for a much larger version. The pants area is much closer together than the toys that have joints. The elbows are much smoother. And the most obvious are the hands, where you can see individual fingers. Even as a sophisticated toy, Bandai has never made anything as sophisticated as this looks. Also that they have Deluxe Swords, that are the role-playing toys and that it is so detailed with colors and the swords with the toys are silver. So it would make sense they would make the sword props to go along with these new suits.

Of course I have no proof. This isn't proof that it will be on the show. Nobody knows right now. But I am sure this will be forgotten by next year. We won't know for sure until the show airs or/and is over. The reason I put 'Is Santa Real?' in the title because it would be more fun that saying 'Is it Real or Not Real?'. 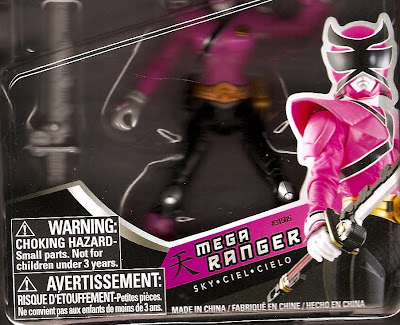 I went to Wal-Mart near me in Miami, Florida, at Galloway road, near the area of Sweetwater (those who may know what I am talking about) and found MMPR 2010 toys along with only 1 Red Ranger, 1 Pink Ranger, Mooger and the Samurai Megazord. I snagged the Pink Ranger and Mooger, as I was low on cash. You can imagine the mad house Wal-Mart is right now, a day and a half away from Christmas. Lots of toys, not enough time to rummage through the mess. Most likely the Samurai toys snuck in with the MMPR ones or a scappler snatch most of them away. AND YES THE SUITS ARE REAL, THAT IS FABRIC AND THOSE ARE HUMAN WRISTS. 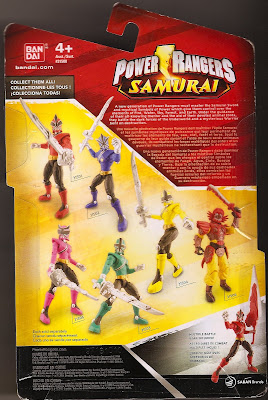 Posted by Lavender Ranger at 6:15 PM

I honestly think people should calm down. First of all, this is just Saban's way of making PRS his own, without making it a carbon copy of Shinkenger, which is what most fans want. Just because PR uses Sentai footage and props doesn't mean that it is Sentai or a translation. It's not a dubbing, it's an adaptation. Besides, I honestly don't have a problem with the suits. The mouths may look a little out of place but if they actually make it on to the show and have a cool storyline behind them, I can totally live with that. Besides, I didn't too much care for the samurai cloaks either, especially the Hyper Shinkenger one (too much red for me). I feel that as soon as Saban starts doing what people want which is advertise or showcase, people just get all up in arms because it's different from what they want. Get over it.

Elijah, I know you're not referring to anyone specifically like me or whatever, but I have no problem with him making his own suit, I just wish they had regular figures first because they are obviously using the original Shinkenger suits (evident by the promos) and then these later.

To be clear, while I really don't think these are people in suits (To add to my earlier point, the fingers also seem to be impossibly long for real humans), I'm 100% fine if they DO end up using them in the actual show. Apart from Pink's over-large helmet, I actually really like them and they make way more sense then just some white sheet of cloth as a vest for a power up form.

I commented on this, but it said there was an error, so I'm not sure if my comment was sent.

@Lavender Ranger: Thank goodness you don't think I'm referring to you because I honestly wasn't but the whole "It's not gonna be as good as Shinkenger" or "They should've kept the cloaks" thing is getting REALLY old and the show hasn't even started yet. I've gone on countless blogs and read those types of statements and it totally bothers me. I am fan of both but it makes me mad when people don't know how to separate the two. Noted, I understand the fact that you wished they'd come out with action figures modeled after their ranger form on the show but honestly, I can't help but think that this is just a way for them to create designs and market the show their way which doesn't mean that those suits will appear in the show.

Maybe this are... movie suits! Who knows!?

Apparently my comment didn't get published, so here it is:

If those are actual suits I LOVE THEM. THEY ARE BEAUTIFUL. I WANT ONE.

If they're toys, I don't want one. I don't care about toys. You can't do much with them.

Luca, yeah I didn't see yours before for this post.

These are real people/actors in suits that they wear later on in the series in their powered up "mega" mode.

In their powered up mode they are called Super Shinken Rangers.