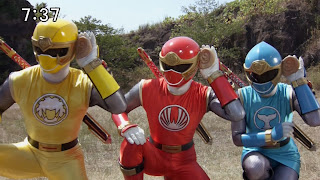 The article looks weird but this what they said:
On January 11, police in Aichi Prefecture arrested a 26-year-old male company worker from the prefecture's Toyohashi City on suspicion of using the Share file-sharing software to upload the live-action special effects show Kaizoku Sentai Gokaiger online without the permission of Toei, the copyright holder. According to the Association of Copyright for Computer Software (ACCS), the suspect uploaded the series' 26th episode around September 16, 2011.  According to the police investigation, the suspect also uploaded obscene animation and drawings. The man said under deposition that he had been uploading anime for about four years because he wanted to make these titles available to people for free.

On a kind of related note, Megaupload got taken down by the FBI. As a consequence Power Ranger Planet has lost most of it's links and Dead Fish Fansubs, which recently closed, has lost everything they ever uploaded. A number of toku shows have been left without any DDLs.