Today it was hard to see the episode online and there is no pictures, I am sure someone will upload the raw in a few hours. 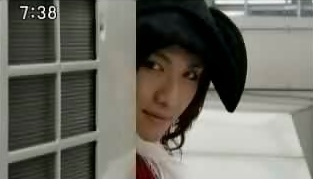 Here is a quick summary:
Basco sends two of his monsters versus the Gokaigers' mecha. They defeat them, but the Gokaiger witness Basco shoot down Sally. Marvelous feels sorry for Sally and takes her in, they are nice to her and bandage her. She is thankful for this. The original plan was for her to take the treasure chest. She takes it but the Gokaiger were expecting this and had it empty. She has a change of heart, Marvelous goes near her and Basco reveals he had a bomb strapped on Sally and blows her up, harming Marvelous. The other Gokaiger fight him as Dairanger, Hurricanger and Gingaman, they lose, he takes the Ranger Keys. They are all unconscious. It starts raining as he takes over GokaiGalleon. 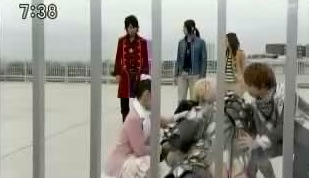 Episode 48:
Next week he makes clones of the six Gokaiger to fight against the heroes.
http://www.tv-asahi.co.jp/go-kai/contents/Next/cur/index.html 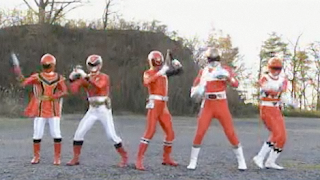 Posted by Lavender Ranger at 6:05 PM

I didn't have too much trouble... until the very end, when Keyhole decided to freeze the video on me, so I lost almost all of the final scene.