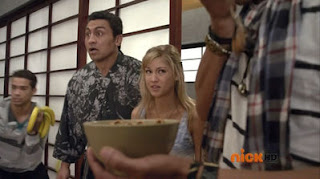 Emily trains with Mike but trips up when she is 'nice.' Kevin tells her that she is too nice and has to toughen up. Mia and Emily go shopping and have a mini 'fashion show' with a variation song to Power Rangers song with lyrics about love or something. Bulk and Spike just so happen to be at the store. Bulk asks Spike if there is anything he likes when he spots Mia and hides from her. Bulk tells him to speak to her but he doesn't. Mia and Emily leave and Spike spots her Pink Wallet. They see the driver license and they have their address. The new Nighlok makes people hungry and/or thirsty when his dirt hits them. The Six Rangers arrive and fight Moogers. Emily, trying to prove herself, fights the monster and he beats her up. She de-moprhs, Mia, Kevin, Anronio and Mike get dirt on them and de-morph and become hungry. 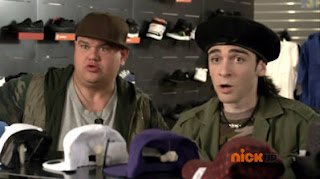 Jayden tries protecting Emily, the monster hits Jayden, he de-morphs but the monster is out of dirt. At the Shiba House, the five Rangers eat like crazy. Emily tells Jii that it is her fault. The monster apologizes to Serrator but he says its fine because they will suffer and the water will increase. Bulk tells Spike that when he returns the wallet, she will get her hero. Spike imagines how it would be, we see the SHiba house. Spike says his heart belongs to the Pink Ranger. Spike and Bulk arrive at the Shiba House. Bulk thinks she is rich. The doorbell is the Power Ranger theme song. Spike thinks Mia opens the door but it is Jii and Jii says that he is not interested in buying anything. Spike says he wants to see Mia, Jii runs off when the Rangers make noise. 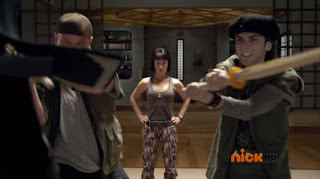 Bulk and Spike sneak in the house and see the Samurai armor and dojo. Bulk almost faints. Jii fights Kevin from eating flour and gets covered in flour. Bulk and Spike 'mediate' in the dojo and Jii catches them. Bulk tells Jii they want to sign up for training. Jii says there is no training. Jii runs to Emily and tells her to get rid of them. Emily spots them. Emily recognizes Spike as the guy Mia met at the factory. Emily dresses up in a wig and dressed 'tough' and acts like a military drill sergeant. She asks for 500 push-ups. She leaves the room and realizes she can be tough. Emily and Jii try cleaning up the kitchen. Emily then have Bulk and Spike hit the dummy 500 times. Jii gives the five healthy food to eat---watermelon. Emily has the duo to hold watermelons. The shiba alarm go on, Jayden still feels the duty and leaves. Emily puts the alarm on silent. Jayden and Emily run off and Emily tells the Spike and Bulk to not move. 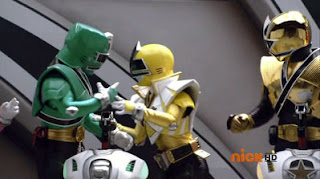 Jayden fights the monster in a quarry. Emily comes in her 'tough' fatigues and morphs and protects Jayden from bombs.  She creates a wall to defend from his dust. He strangles her and knocks her in the air. She falls after an attack and says she won't give up. Jayden throws her the Black Box. She goes Super Samurai and flies through the air and does a Super Primate Cyclone. Everyone returns to normal. Jii sends the Rangers through the back way to morph. Bulk and Spike are sweating. Bulk's eggs under his chins and hands fall off. The Rangers arrive in their Zords. Emily calls for the Gigazord and is in Super Mega Mode. The monster beats them. Emily goes inside the Ape Zord and disengages and climbs on top of him. 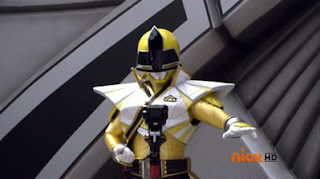 The others lift into the air and slash at the monster. She doesn't go into Shogun Mode and the monster explodes. Emily runs off. Bulk and Spike crawl on the floor. Emily returns in her outfit. Spike returns the wallet. She says tomorrow won't be so easy. They groan and leave. Mike checks the fridge and it is empty. Emily gives Mia her wallet. Emily says, "Don't ask." Kevin asks what happened, they don't remember. Emily says it was the toughest day ever. 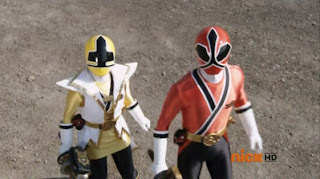 Review:
By getting rid of the Rangers who are stuck in 'Shinkenger' mode, they can have a semi-original episode. The concept of Yellow not having confidence and the monster are from Shinkenger but of course the Bulk and Spike plot with Emily is original. Emily going in and out from the dojo to the kitchen was like a metaphor for what the writers go through, staying true to Shinkenger and paying homage to MMPR and trying to combine the two. Emily not going Shogun is disappointing because I wonder when she will become Shogun? I guess they are doing premieres of Super and Super Mega separate from Shogun.  Also, Bulk and Spike returning the Rangers something they lost was already done with Antonio's Morpher. It was a pretty good episode overall.
Thanks to Samuraicast.com for the pictures in HD!
http://www.samuraicast.com/gallery/thumbnails.php?album=420
Posted by Lavender Ranger at 12:30 PM

Dirt that makes you hungry? Shinkenger is weird.