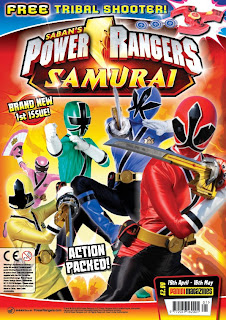 http://www.toynews-online.biz/news/35993/Panini-publishses-Power-Rangers-Samurai-magazine
Panini will publish a magazine only in the Untied Kingdom based on Power Rangers Samurai. Power Rangers has not have a magazine since the Mighty Morphin Power Rangers Magazine from 1994 to 1996 in the United States. I, myself, still have 2 issues of the old magazine. I was subscribed to it for two years. This magazine will have 36 papes, the cover price of £2.99 kids will also get a free Tribal Shooter toy and stickers and aimed for children from four to eight. Power Rangers' master toy licensee Bandai is running a competition in the maiden issue. There was also 'annuals' in the UK for MMPR to Zeo and then Ninja Storm to RPM.
Posted by Lavender Ranger at 12:23 PM

This came later than expected. The annuals sound intresting.

There was a Power Rangers Turbo annual and comics for Ninja Storm through to RPM as well.