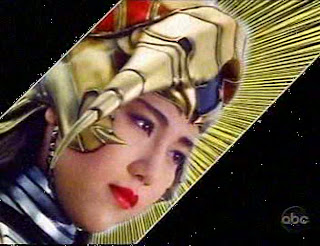 Like some of my popular posts, it is about something I thought everyone knows. I was chatting with a fellow fan and he asked about Scorpina and said Scorpina disappeared with no explanations. Well basically the first season she and Rita were just from Zyuranger footage.  The legendary Machiko Soga played Bandora/Rita and her voice was done by Barbara Gordon. Ami Kawai played Lamie/Scorpina and her voice was done by Wendie Lee.

In "Green With Evil" saga, we see the backs of Rita and Scorpina at the beach in front of the Rangers. The actresses have not been revealed but they clearly had the costumes in season 1. This didn't occur again. Baboo, Goldar and Squatt did have American suit actors in the first season, but we didn't see Scorpina and Rita in season 1 in American footage. 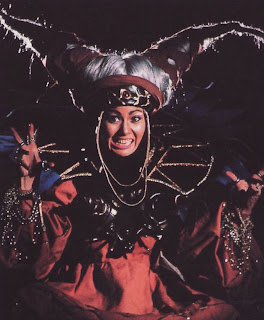 In Season 2 episodes "The Mutiny," we see someone in the Rita costume. This pic from a Sentai book with a Power Ranger section and looks like it was taken in the last scene in "The Mutiny" where she is seen inside the space dumpster in the Viewing Globe singing a variation of "100 bottles of beer on the wall." Carla Perez played Rita from Season 2 and on until In Space. She presumably was in since "Mutiny." But in "Mutiny" we see her face in the shadows and only see her back. Not until "The Wedding" saga, we see her face because Finster puts 'moon mud' on her to make her look 'younger.' 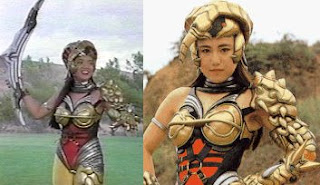 We see Scorpina in the first half of the first episode of Mutiny, that was footage from the last Zyuranger where a bin comes and collects Bandora and her gang. Then we see Lord Zedd and the backs of the characters--which is American footage. We see Finster, Babboo, Goldar, Squatt and Rita, but no Scorpina. We later don't see her. She is never mentioned again. My personal theory is that they found an American actress for Rita but couldn't find one for Scorpina. 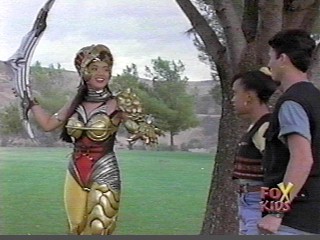 Not until the second half of Season 2, we see Scorpina in Goldar's Vice Versa. Sabrina Lu played her, her human disguise was called Sabrina. Fans have heard that Saban couldn't get 'a lock' on the actress and they couldn't do another episode with her. But the truth is, according to Sabrina Lu at the Power Morphicon 2012 is that she was available but no one called her. They had planned doing an episode where the Rangers have been shrunk with Scorpina in it and the script is available online. In "Goldar's Vice Versa," they used footage of Goldar and Monster Scorpina and spliced it with the Thunder Megazord to make a 'new' battle. She survived but was never mentioned again. I personally liked Scorpina. There was a toy planned of the Monster Scorpina but she was never produced. "Goldar's Vice Versa" was released on VHS.

In ZyuRanger, Lamie/Scorpina married Grifforzer/Goldar and had a baby (now a late teenage boy) in the ZyuRanger's Final Episode. I was wondering, why did Ami Kawai refused to reprised her role in Gokaiger? Lamie should have been fighting against the Gokaigers, but it did not happen.

i saw that Sabrina Lu said she would reprise the Scorpina role is asked. I think that'd fit well with the whole Megaforce 20th anniversary.

Plus there were characters not visible at the Countdown to Destruction such as her and Gasket and Archerina. they could also work in Ninjor and Auric the Conquerer.

Gokaiger worked in Ninjaman (Ninjor) so maybe they can have some form of story where they uncover all the lost allies?