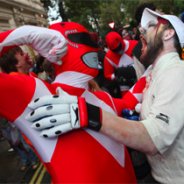 "Firm powers up as product becomes best-selling item in the company's history.  Lycra costume company Morphsuits has teamed up with Saban to launch a Power Rangers dress-up range.  And the costumes have already become the best-selling items in the company’s history. The suits come in the classic colors from the ‘90s TV program: black, blue, pink, yellow and red. Last weekend (Saturday, October 13th) saw hundreds of dressed up fans ambush World Zombie Day in London (pictured). Videos and photos popped up online and on Twitter under the hashtag #RangerAmbush.  After defeating the zombies, the Power Rangers took part in a mass conga line across Waterloo Bridge.  Gregor Lawson, co-founder of Morphsuits, said: “There’s a whole generation that grew up wanting to be a Power Ranger, so we’re extremely excited that we’re the ones to make that a reality. They’re the best selling suit we’ve ever had.”