Bandai has revealed it is collaborating with Disney to make a Super Sentai Robo inspired by Mickey Mouse and his friends. With the EIGHT years of Power Rangers being owned by Disney and Toei collaborating enough to have shot opening sequences for both Magiranger (2005) and Gekiranger (2007) in New Zealand where Power Rangers is being filmed, you would think something like this would already had emerged. 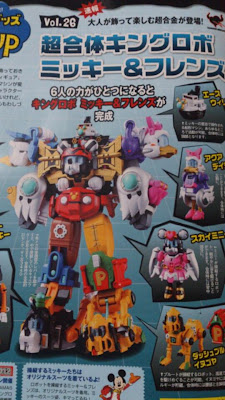 Donald Duck is the right arm, Daisy Duck is the left arm, Pluto and Dog house is the right leg, Goofy is the left leg, Mickey is in the center and the Steamboat Willie is the head. I don't know about Minnie.  It seems Mickey Mouse plays the Red Ranger role of the team. It seems cool, I would get this for my grand nephew but hope it comes to the US!

I'm guessing Minnie is the back. You can barely see her hand between Mickey and Daisy.

This needs to be in an episode of Micky's Clubhouse or whatever's airing on Disney right now.