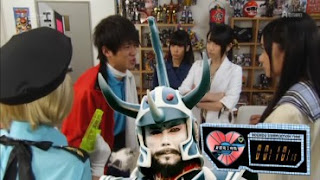 Red says he should had known that General Pain was the guy he met at the Karaoke place. Blue says they just wasted time talking about something irrelevant. Yellow is dressed as a police officer. 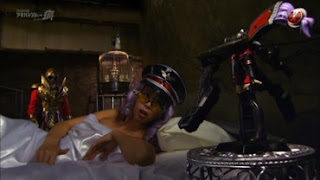 Meanwhile Pain sends a new monster to Marushina called Fist Beast of Time, Mutou Mushiten. He is supposed to be influenced by Gekiranger villains. General Pain says he'll stretch his legs. Red is at the Karaoke place asking about Pain but can't get info. One guy tells them that he eats at the curry place. They ask a guy there who says they missed him. He says he drives a van with the Baros mark. They find the van and a girl tells them a cranking guy came out of it, saying he was going to Suidobashi. 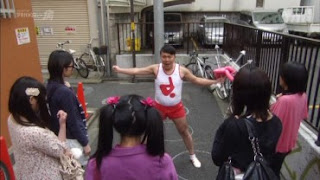 They end up in an alley and see a guy with hearts like Hadezkin had. The girls around him disappear. Yellow figures out he is referring to the villains of Gekiranger and he transforms into the monster and they do too. Marushina is on a coach, General Pain appears underneath her, saying he just took a bath. She steps on him and berates him. The monster fights the Akibaranger. 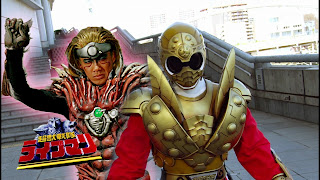 The monster references the villains Gozma of 1988. Marushina dons her dark armor and fights the trio. Marushina tells Mutou to help, he says he is bored and will leave. General Pain tells him to help but he says she is distracting. He burns her and a business card comes out of him and Luna picks up. 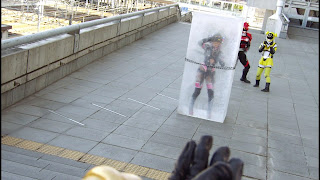 Pain traps Marushina into a box to preserve her. He says his new lieutenant is Mutou. He will defeat all teams. Mutou does an attack from Bio Hunter Silva and the trio are ejected from the Delusional World. The trio lament at the café. Red says their best bet is to take care of Pain in the real world. 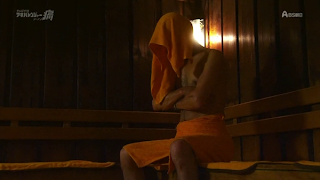 Luna gives them the ticket from the Tokyo Dome Bath that Pain dropped. The trio go in disguise to the baths, Red goes shirtless. He enters the sauna but there is a man with a towel on his head. He waits and waits but the nan doesn't leave. Red thinks of ice cold beer and can't bear the heat. 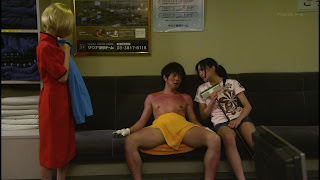 Red comes out of the sauna all red and burning. The mysterious man leaves and Luna follows him and does a scrub on his back but seems to be too soft. She uses a broom and gets tired, saying he is too much. He goes past them and Luka goes to give him a massage. She steps on him with her high heels and sees he has a lot of scars. He says it is in his battle against heroes. 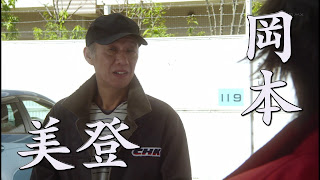 Later, they go after him and the guy takes Red down. They are shocked to find out he's not General Pain but veteran suit actor Okamoto Yoshimori (and not Jiro--who plays Torin), he played main bosses on stage. Luna says he plays he plays bad guys because he has a scary face. Red mentions that the villains he played are villains that the monster used against them. Okamoto says that Pain paid him so he would give him a coupon for the sauna and do some motion capture for him. 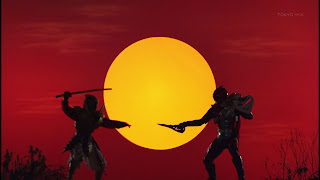 So he did moves of Bio Hunter Silva to program Mutou Mushiten. Red says he respects him as much as Kazuo Nobou. Okamoto says a bad guy enjoying himself shouldn't do that, that he enjoyed the beautiful death of the villains. He leaves them inspired. Then the monster appears and the 3 transform and fight him. He does a Sargain attack from Hurricanger. Red goes super. Blue and Yellow make a Sunset simulated for Red and the monster. They display a great death for the villain. 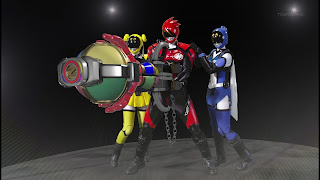 They call their powers from Zyuranger, Hurricanger and Dairanger and form a new cannon: Penultimate Bazooka and destroy the monster. Pain says he will return. Blue wants to hold the cannon and it was heavy. They relay this info to Okamoto, he is happy. The guy next to him is Seiji Takaiwa, he played Ninja Red, Mega Blue, Ginga Red, Go Red, Time Red, Magi Red, etc. Okamoto gives them Pain's business card. A man in a hospital bed turns on the TV to Sentai.﻿ 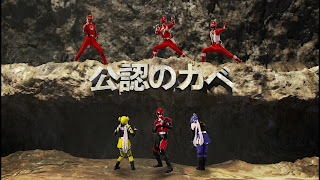 Review:
I was disappointed that Tentoraijer did not come back but her costume was recycled and it was a new male character. But it was a good episode anyway, paying tribute to villains and the men who played them. Seiji Takaiwa also plays Kamen Riders, Kamen Rider Agito-Kamen Rider Wizard, but Kamen Rider does not exist in Akibaranger. Fans were wondering if the armaments were going to merge like the original one. Next week's episode seems to be an interesting one. Other than advertising the new Figuarts, I want to know what the season is doing---coming that it is soon ending. 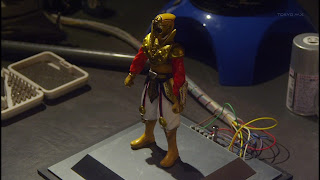 Posted by Lavender Ranger at 1:17 PM