I decided to make a catalog of various VHS and DVDs. It was hard to find pictures of everything. But I tried. Some images and info are from http://powerrangersmediainfo.blogspot.com/ and http://scratchpad.wikia.com/wiki/The_Classic_Year_of_MMPR_into_as...Power_Rangers_20_for_Kongs_%282013%29
http://homepage.ntlworld.com/s.fleming23/vhs.htm

Day of the Dumpster
Two versions were released, the first in 1993 and the second in 1994 with new boxart and new promos and an interview with Jason from the D.A.R.E. event they had. The second version was also released in Spanish in the United States called "El Inicio" (The beginning). It just had one episode: "Day of the Dumpster." Both had the Red Ranger on the cover. 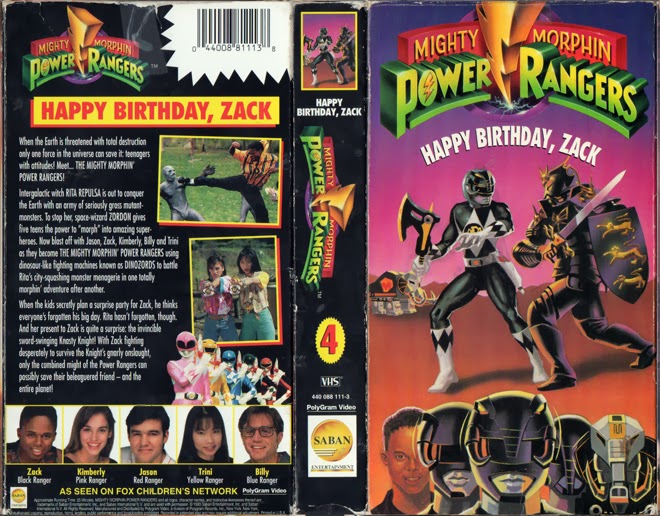 Happy Birthday, Zack
Two versions were released, both had the Black Ranger on the cover. It was the episode "Happy Birthday, Zack." The second version had special feature like an interview with Zack from from the D.A.R.E. event they had. 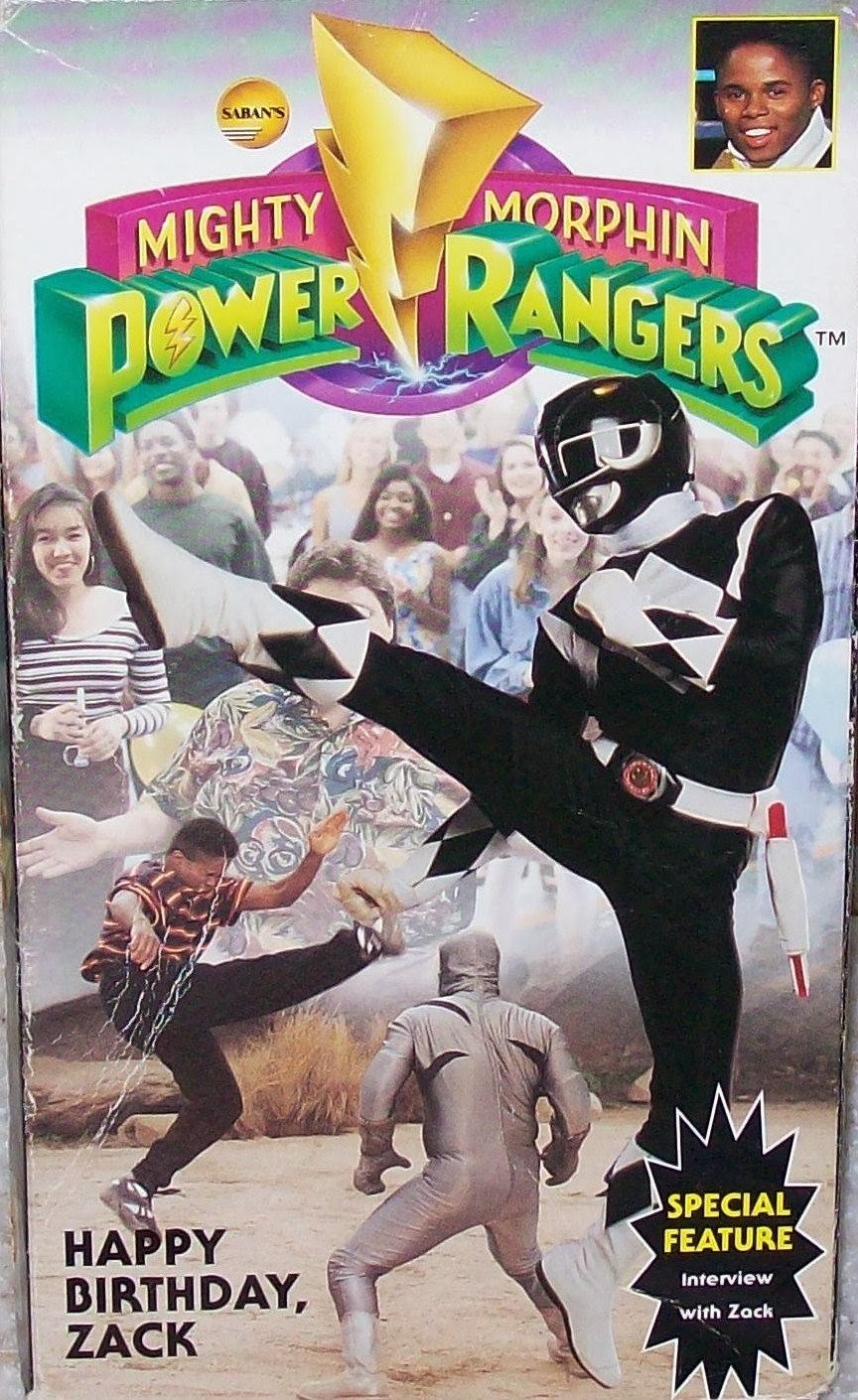 Food Fight
Both had "Food Fight" which really didn't feature Billy but nevertheless he was on the cover. In the second version, it had Billy Interview from D.A.R.E. Ironically, on the back of one of the tapes of the first versions, it had Billy as the Green Ranger, this before we knew of the existence of Tommy.

High Five
Two versions, both had the episode "High Five." The second had an interview with Trini from the D.A.R.E. event they had.

No Clowning Around
Even though Kimberly is not featured in this episode, both versions had her on the cover. The second had an interview with Kim from the D.A.R.E. event. I had the Spanish version of this one.

Green With Evil Part One Out of Control
Both versions had the first episode of the saga, the second version had "Interview with Tommy & Friends."

Green With Evil Part Two Jason's Battle
Both versions had the second episode of the saga, the second version had "Interview with Tommy & Friends."

Green with Evil Part Three The Rescue
Both versions had the 3rd episode of the saga, the second version had "Interview with Tommy & Friends."

Green with Evil Part Four Eclipsing Megazord
Both versions had the 4th episode of the saga, the second version had "Interview with Tommy & Friends."


Both versions had the 5th episode of the saga, the second version had "Interview with Tommy & Friends."

More after the Jump 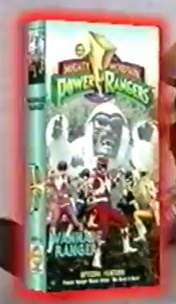 The Wanna-Be Ranger
This was one of the three new ones of the second round of tapes. It had the "Wanna-Be Ranger" Episode and a special music video "I Will Win." 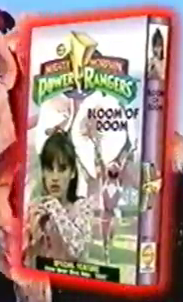 Bloom of Doom
Second Season Episode with Pink Ranger on the cover and music video for "Fight." 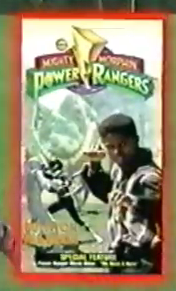 Putty on the Brain
Second Season Episode with Zack the Black Ranger on the cover and music video for "We need a Hero." 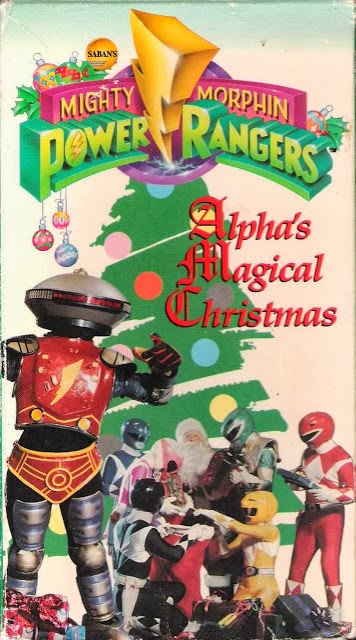 Alpha's Magical Christmas
This was only available on VHS until it was a bonus in the MMPR DVD Boxset, it did not air on TV. It is mostly a sing-a-long video with kids but it has the distinction of having Rocky, Aisha and Adam and the Green Ranger and the White Ranger. 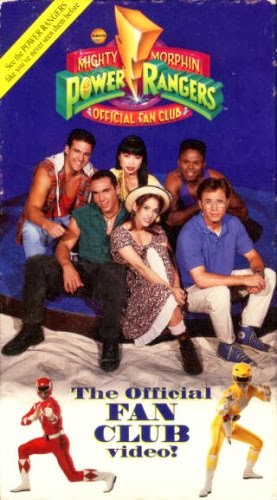 The Official Fan Club Video
WHen you joined the Power Rangers Official Fan Club, you get this video with interviews with the actors in character. It had a music video and at the end had a promo for VR Troopers. 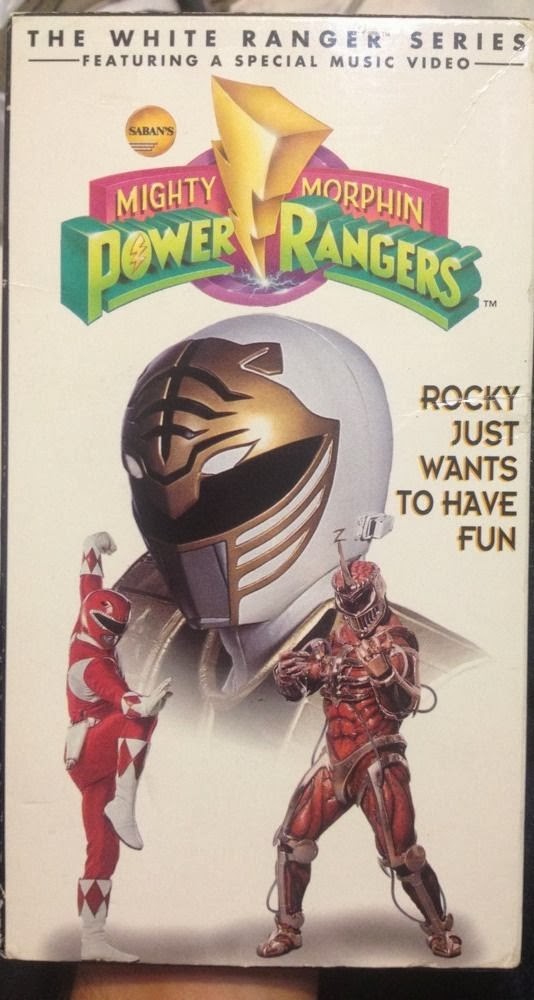 The White Ranger Series: Rocky Just Wants to have Fun
Second Season Episode featuring Rocky, it had Red Ranger and Lord Zedd in front of the White Ranger on the cover.

Goldar's Vice-Versa
Second Season Episode featuring Adam, it had Black Ranger and Goldar in front of the White Ranger on the cover.


Where There's Smoke There's Fire
Second Season Episode featuring Aisha, it had Yellow Ranger and a Putty in front of White Ranger Cover. 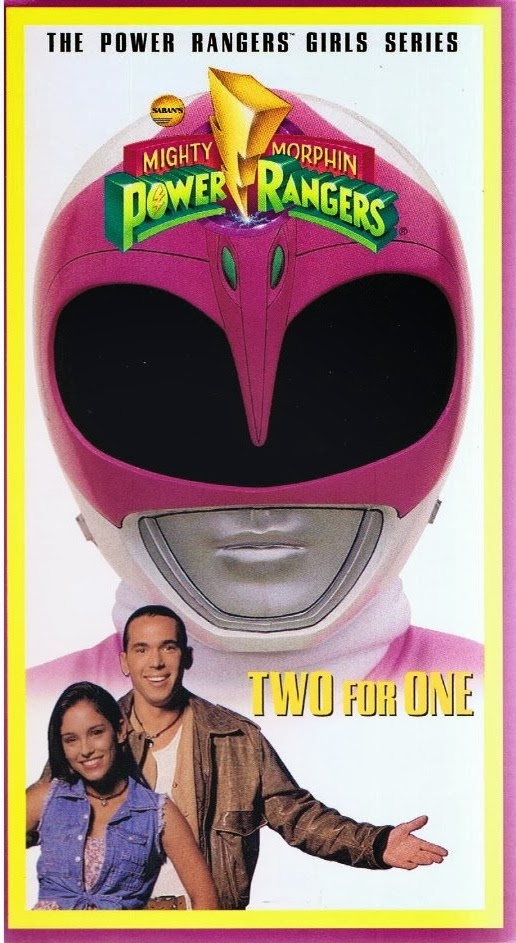 The Power Rangers' Girls Series: Two For One
It had Tommy and Kimberly on the cover with Pink Ranger, the episode "Two For One."

The Power Rangers' Girls Series: Forever Friends
It had Kim and Aisha on the cover with Yellow Ranger, episode "Forever Friends."

All Time Favorites: White Light
Both episodes White Light Part 1 & 2 'Re-told by Bulk & Skull', which were interruptions from Bulk and Skull.

All Time Favorites: Ninja Quest
All four episodes of Ninja Quest, intercut with Bulk and Skull.

All Time Favorites: The Good, the Bad, and the Stupid: The Mis-adventures of Bulk and Skull
This special had clips and flashbacks with new footage of Bulk and Skull. This was available in the MMPR DVD Boxset.

Lord Zedd's Monster Heads
This was clips and flashbacks with old footage of Lord Zedd with new voice-over but all was recycled footage. This was available in the MMPR DVD Boxset.

The World Tour Live On Stage
Power Rangers Live Tour started in 1995 and this is a VHS version. 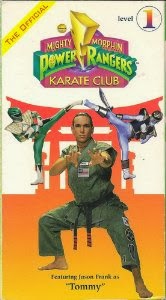 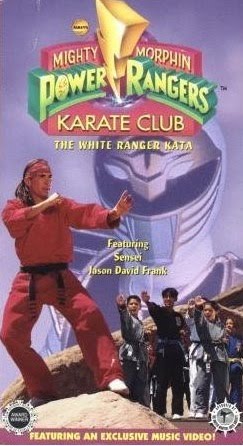 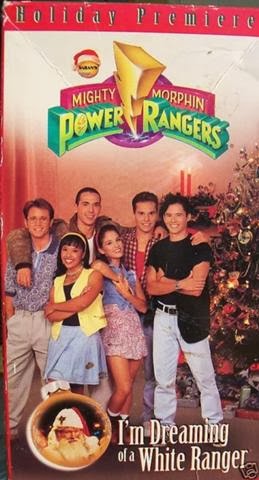 I'm Dreaming of a White Ranger
This episode did air on TV but the VHS version had Kat saying hi to them through the viewing globe from Australia, which some fans say that canonically does not make sense because Kat did not know their identities and snap out of the spell until "Different Shade of Pink." 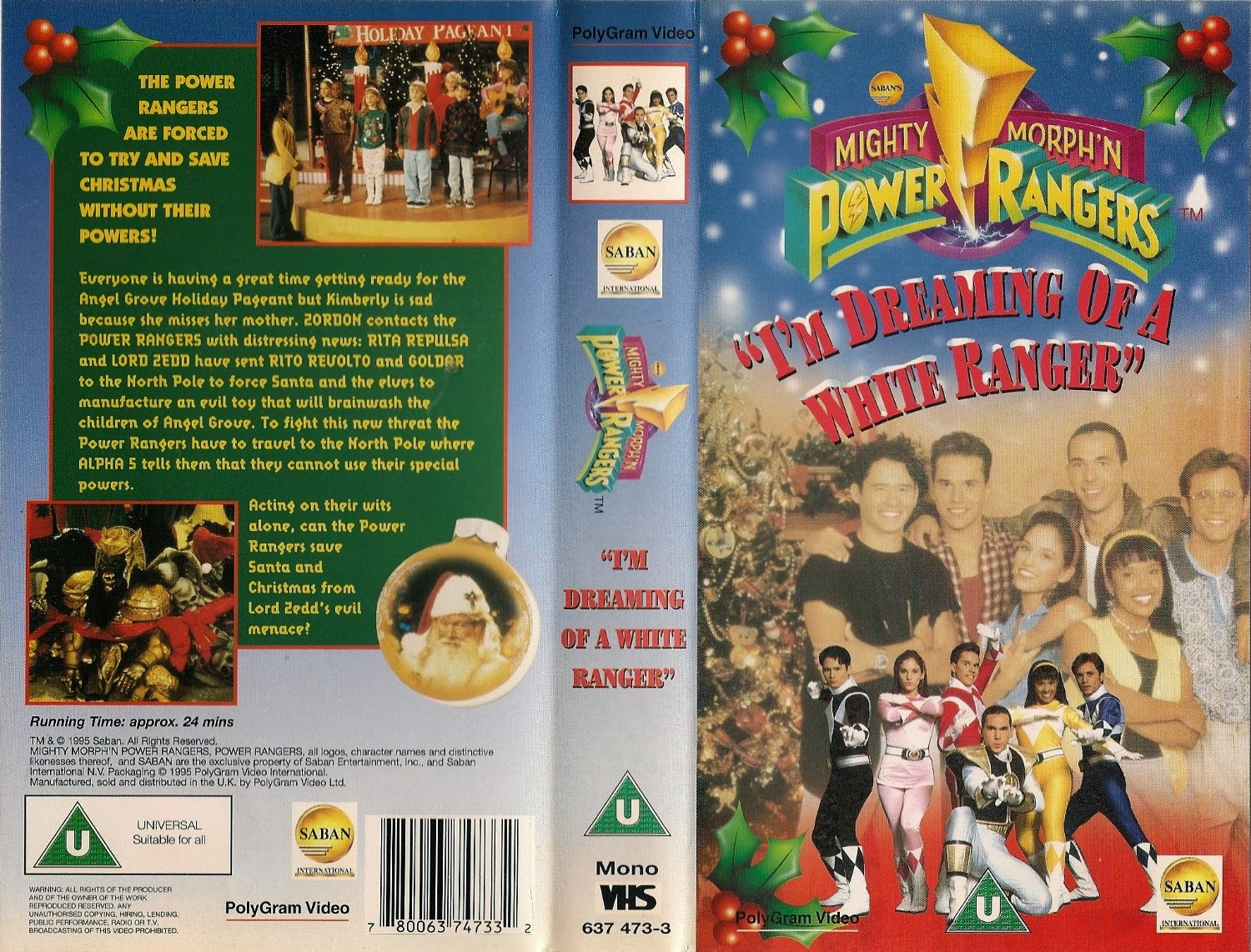 Pink Ranger Adventures
"No Clowning Around" and "Bloom of Doom".

Red Ranger Adventures
"Day of the Dumpster" and "Wanna-Be Ranger"

Posted by Lavender Ranger at 11:37 PM

"This episode did air on TV but the VHS version had Kat saying hi to them through the viewing glove which canonically does not make sense as Kat did not know their identities and snap out of the spell until "Different Shade of Pink."

Actually, "I'm Dreaming of a White Ranger"'s original VHS release containing the extra scene of Kat saying hi to the Rangers from Australia through the Viewing Globe DOES make sense canonically, because the VHS version of this episode could be placed easily into continuity before the final scene in Part 3 of "A Different Shade of Pink" since Kimberly spends possibly weeks to months training for the Pan Global Games.

hell it's nice to see that again

I have the first 5 episodes on VHS that are unopened and I'm trying to find out how much they are worth.