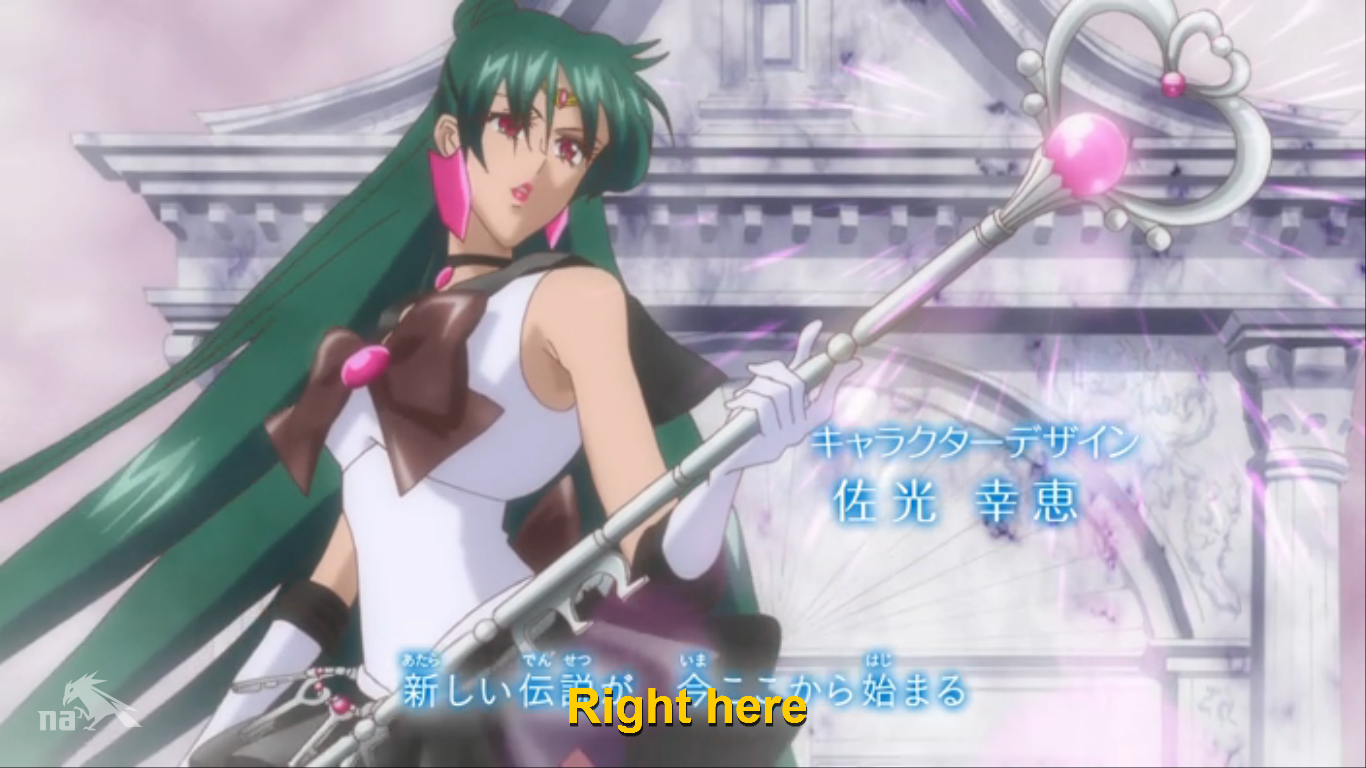 Little pink hair girl threatens Usagi with a gun, Mamoru pulls her away and it turns out to be a toy. Usagi faints, the girl runs off. On Nemesis, Prince Demande congrats Saphir on fealing the Silver Crystal. Wiseman says to get it. Prince says they'll destroy it. The four (Rebeus, Saphir, Prince and Esmeraude) toast. Rebeus says he'll take care of it and presents the Spectre Sisters. Koan says she will track down Rei, who can control fire like her. Rebeus tell her to start recruiting. She says she can handle it. Back with Usagi, she freaks out about Chibi Usa, saying she could be a villain. Mamoru says its too early to think that. 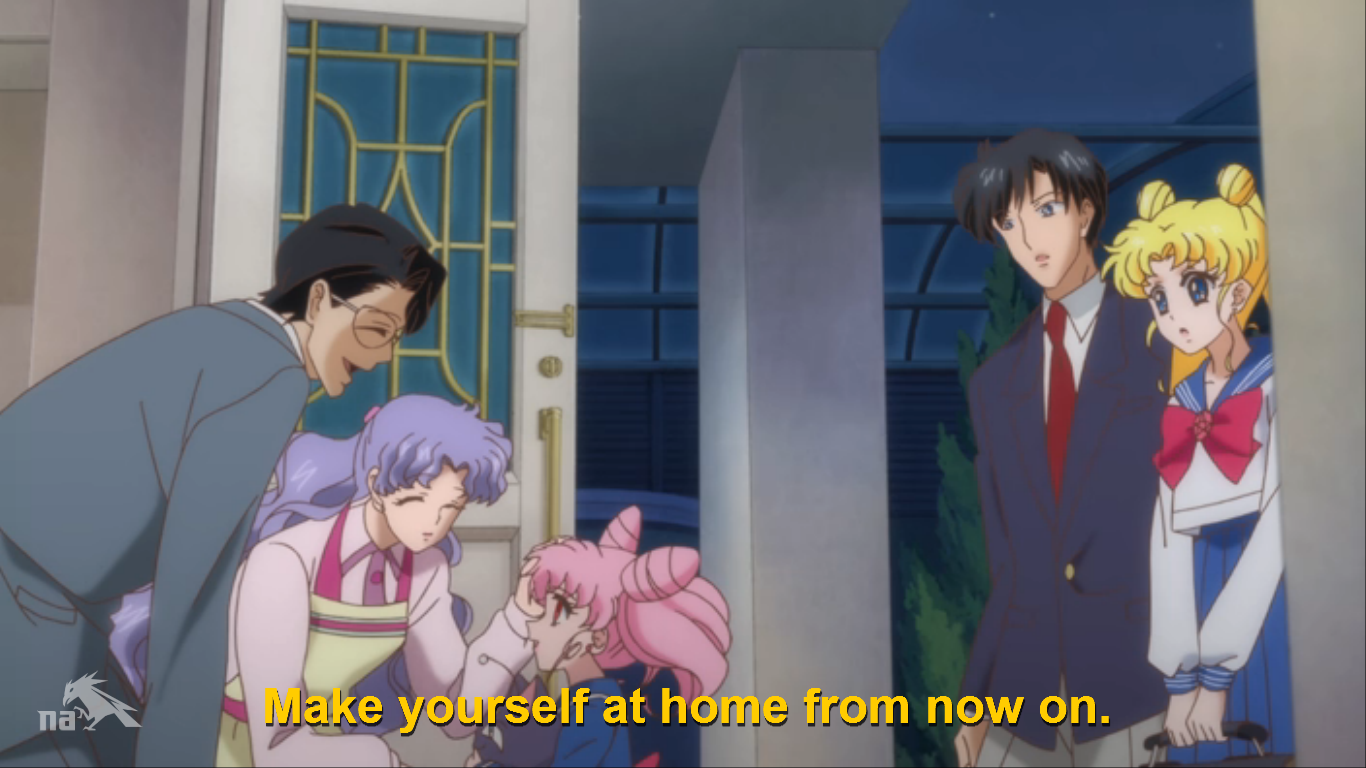 They find her on a swing in a playground. ChibiUsa says Mom. Mamoru approaches her and calls her Chibi-Usa, asking her where she lives and will walk her home. He touches her hand and sees a brief glimpse of Crystal Tokyo. ChibiUsa says it was her fault, she hugs Mamoru, freaking out Usagi. Usagi asks her questions but ChibiUsa doesn't answer her. Back at Tskuino's, Usagi tells Luna about Chibi-Usa. Chibi-Usa runs in the house where she meets Usagi's mom, dad, and brother. Mamoru is about to present himself until Chibi-Usa introduces herself and hypnotizes them into thinking she is their daughter. Luna snaps Usagi and Mamoru out of it. Usagi is mad. Usagi throws Chibi Usa on her bed, telling her to undo it. ChibiUsa says she can't. Luna spots the time key and crystal with Chibi Usa, asking Usagi for her crystal. Luna tells Usagi to keep an eye on her, that she's not an enemy. 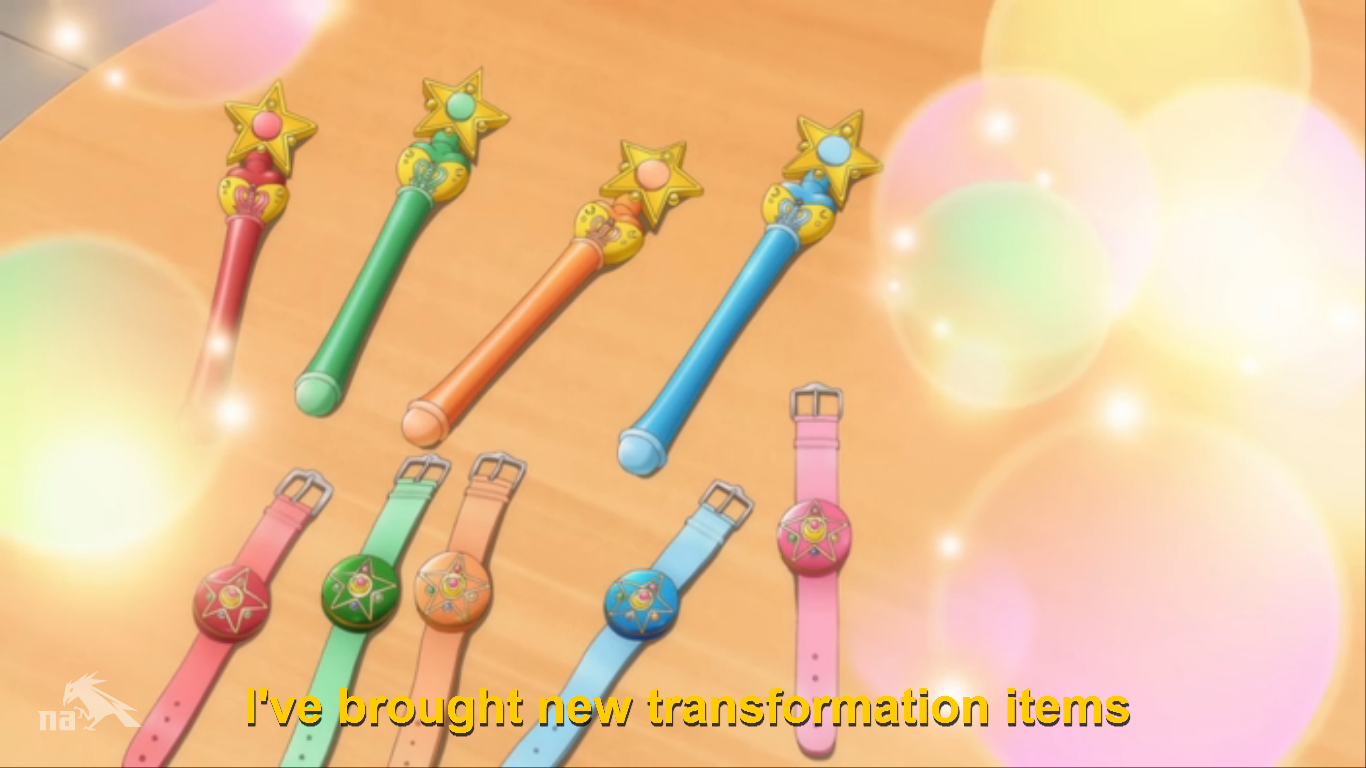 The next day, Usagi and Mamo talk. Mamo says she is ask the police about her, maybe her name isn't Usagi. He wonders what she was trying to tell him before. The five hang out and joke about Chibi-Usa being a long lost sister or her child. They bring up the point that her parents aren't harm. Luna gives them new henshin items and communicators, they are happy. ChibiUsa is watching. Asanuma arrives, Mokoto introduces him, he is Mamoru's kohai, he admires him and wants to be like him. Makoto says he is cute. He leaves. Rei remembers she has to go to the school fair, she's a fortune teller. She invites the girls and leaves. 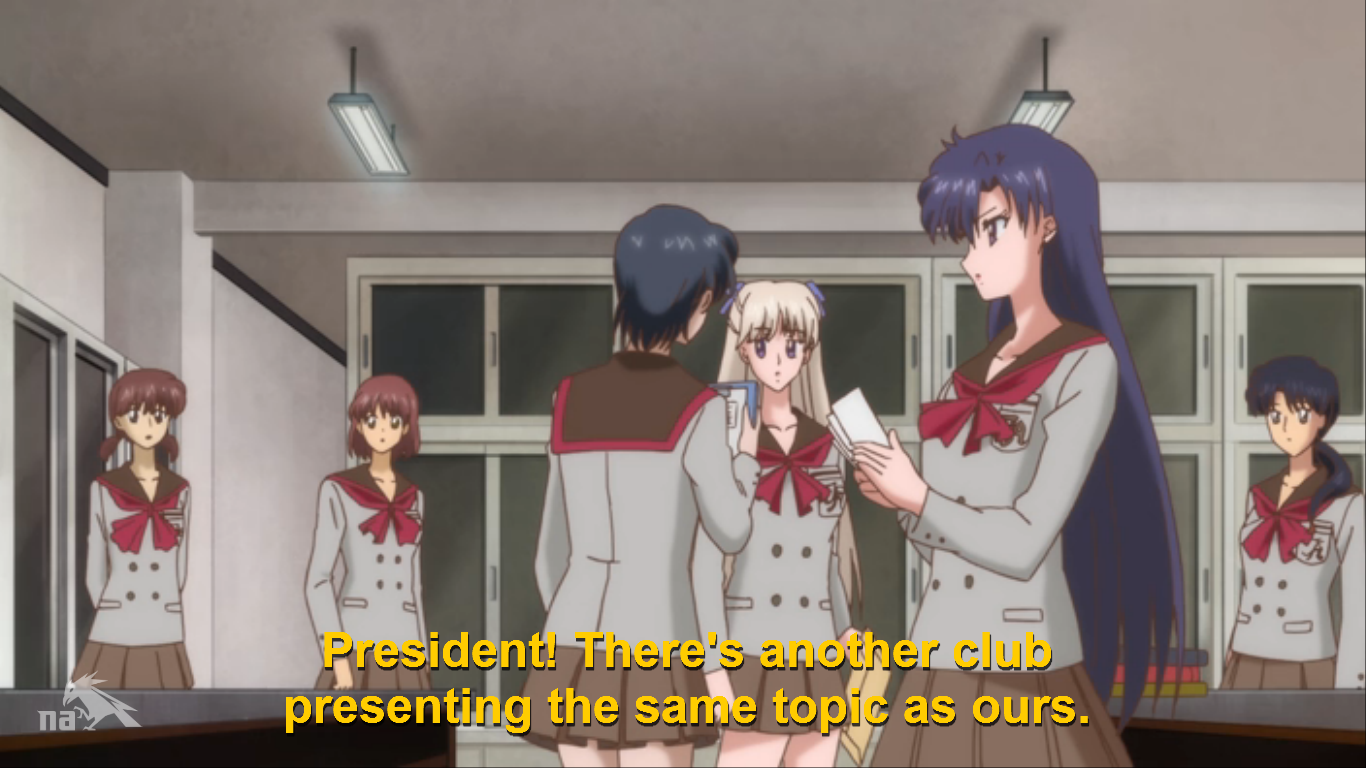 Rei meets the club president of the supernatural club. The girls comment on how Rei is nicer now. Rei realizes she is talking and laughing like Usagi and their friends. President Kotono says there are UFOs spotted, reports on spontaneous combustion, Rei says it is the enemy. One girl runs in telling them about the Black Moon, a club that is competition to them. We then see Koan burn a man alive, it is a vision of Rei's, she wakes up to. Usagi tells her mom she is going to the school fair and tells Luna to look after ChibiUsa. Luna tries to investigate the Luna-P but Chibi-Usa grabs it. Usagi's mom gives Luna milk and Chibi-Usa runs off. Rei gives a positive fortune telling to a girl. 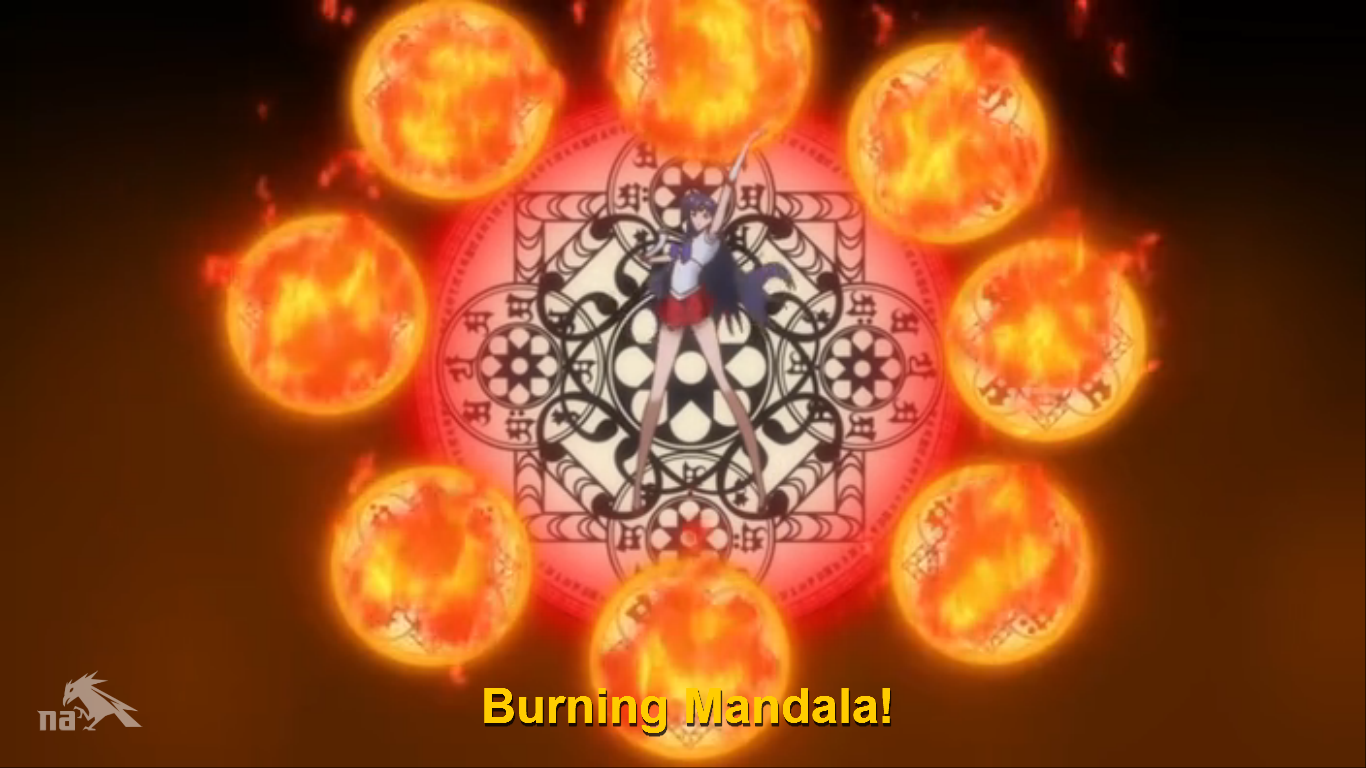 She is taken away to see another fortune teller, but this one tells them their death. They go in and meet Koan, who tries convincing a girl to become a monster for the Black Moon. Rei and Kotono go to report to the sisters of the school when one sister bumps Chibi-Usa down. Chibi-Usa runs off. They then find one sister burning to death. President Kotono faints and the other girls arrive. The team transform. The sisters become Droids and the Sailors fight them with their attacks. Koan laughs and reveals her 'true self.' Rei recognizes the mark on her forehead. Koan says she wants the crystal. Rei introduces her and does the Burning Mandala. Koan and Mars compete with fire, but Mars is consumed with the blue fire. Usagi is saved by Tuxedo Mask. 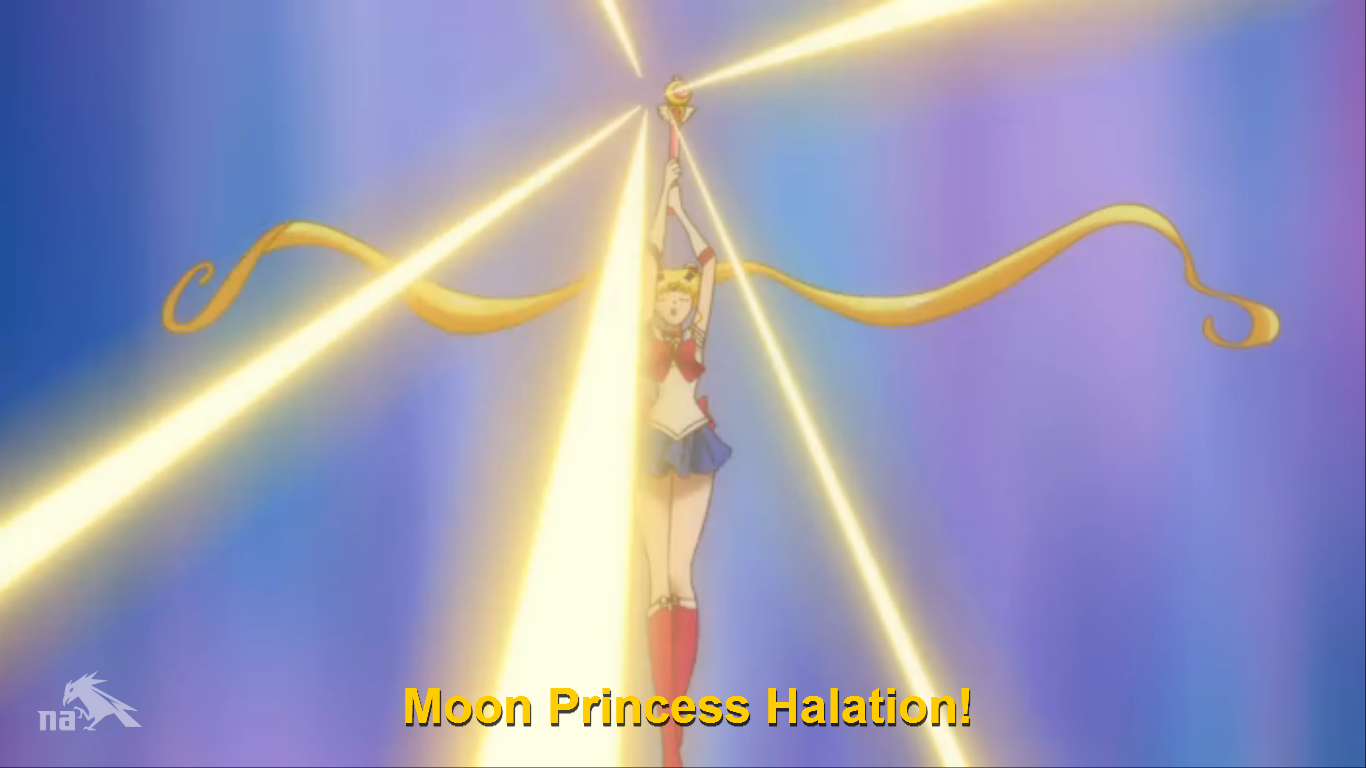 Luna arrives. Mercury does Shine Aqua Illusion on Mars but it is no good. Moon and Tuxedo hold hands and call out the Moon Rod, which Luna says it belonged to the Queen Serenity. Sailor Moon does her new attack, Moon Princess Halation and destroys Koan. Rebeus arrives and introduces himself, saying Mars is still in the blue fire. He is told to kidnap her by Prince Demande and leaves in an UFO similar to the ones Rei say in the supernatural club. Usagi shouts for Mars. To be continued... Next episode (Act 16) is called "Abduction - Sailor Mercury" and it is Chess between Mercury and Berthier. 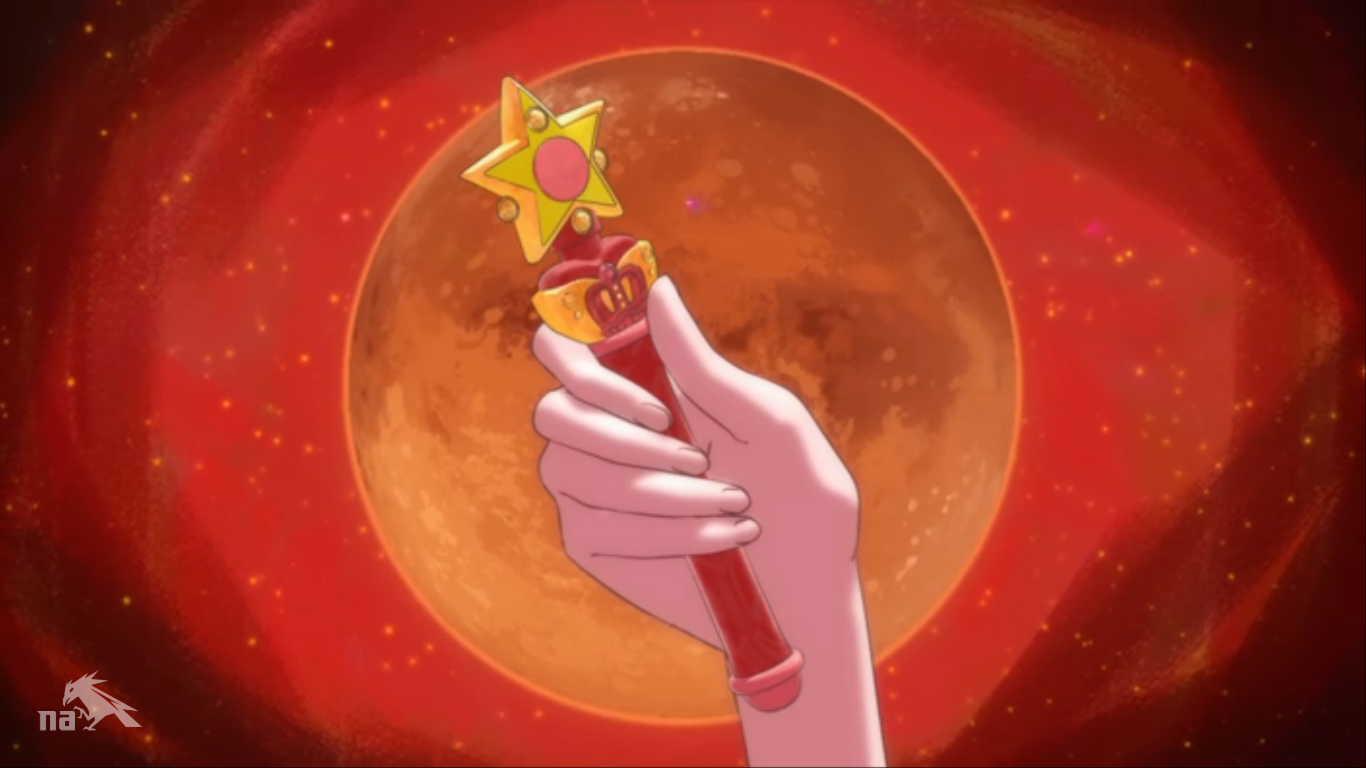 Review:
This has gotten better. I had a feeling it would with the new arc. Unfortunately Sailor Moon Crystal has been plagued with little characterization and just an Usagi-Mamoru love fest. Also the sparky Usagi we knew from the original Anime is back with the foil of Chibi-Usa. Also, Mars gets characterization and focus, we even see other T*A Girl Academy students. We did before in the anime but they were all subordinates to Rei. Now that Rei is like her Manga self, more serious and quiet, we get to see other 'leaders' like President Kotono. Also, we see Rei embrace fortune telling which she did in the manga but loathed in the original anime. Also nice to see Asanuma who was not present in the original Anime, only like once. Like you can see, the Spectre Sisters who were stretched out in the original Anime, they are just monsters of the day now as they have to hurry along like the Manga. There is 26 episodes in all and 10 left.
﻿
Posted by Lavender Ranger at 8:09 PM