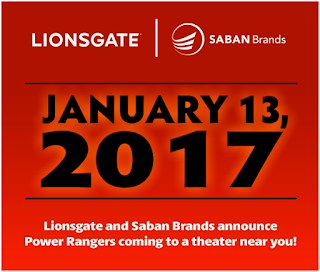 A month ago it was announced the movie would be postponed to January 2017 from its initial Summer 2016 date. This happens often with movies. Fans are concerned that January is not a good release time for movies. What fans forget is that not even the Summer was the big Blockbuster hit it is now until the original Jaws in the 70's. Also SpongeBob: Sponge Out of Water came out in January and did fairly well,  grossing over $311 million worldwide so far, against a $74 million budget.

These zord images have been leaked from the FX production company Legacy Effects. Keep in mind these are concept designs and might not be final designs. Fans are interested in Tyrannousaurs looking like a jet or hovercraft and most likely transform into a dinosaur mode. Also, fans like that the Pterdactyl is all pink, unlike the original that is mostly red with silver and white. There is some discussion about the zords being sentient and these designs not looking sentient. I say do not judge anything until the movie comes out. So far these designs look slightly better than the Mighty Morphin Power Rangers the Movie (1995) Ninja Zord designs.


Posted by Lavender Ranger at 8:33 PM