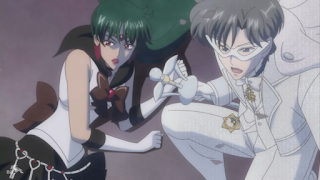 Episode Summary:
Wiseman reaches out to Chibi-Usa. Meanwhile, Sailor Pluto notices the time key quake and a storm appears. Something has happened to Small Lady. She shouts out King Endymion's name as she flies in the air. Venus, the cats and Tuxedos look through the database. Endymion runs to see Pluto and Tuxedo runs after him. Luna finds a file on Death Phantom. He was exiled o Nemesis. Endymion and Tuxedo find Pluto fainted. She says Small Lady has no key and the storm is coming from where she is. Tuxedo Kamen runs towards it. Usagi is in the castle and walks weakly down and finds out the other three are used for bait in a chamber of darkness by overhearing Rebeus and Sapphire. 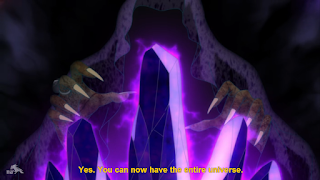 She faints and Demande grabs her, who was stalking behind her. He lays her on a bench and reaches for her face and lightning strikes. She demands to know where the chamber is. Usagi runs off after he says they are dead. Sapphire makes Droids, two females. Usagi walks weakly behind him. Sapphire welcomes her. He explains it is the reactor of the crystal. She realizes they plan to change history. Sapphire says the planet is like his brother, destructive. Sapphire says they are guided by Wiseman. He told Demande of the Silver Crystal and the Queen Neo Serenity. He wanted the crystal destroyed. Usagi is shocked. Sapphire says his brother is obsessed and no one can stop him. 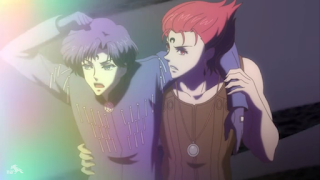 Sapphire says Sailor Moon is dead and history is changing. Saphire throws a stone at Usagi, she tears up. She wonders if this is all because she exists. Her broch and the current Queen glow, a strong light. Black Lady circles around the Wiseman. Usagi sees the current queen and nods. The droids die. Usagi says strong words and Sapphire is knocked back. Usagi transforms into Sailor Moon. Sapphire says it is impossible. Usagi feels where her friends are. She wakes them up and causes a rupture in the floor. Monsters come out behind the three Guardians. The trio transforms. The four Guardians face against Demande, Wiseman and Black Lady, who is still in shadows. Usagi's eyes glow, possessed by the current queen. She says everyone could've lived in peace. The guardians realize it is the Neo Queen Serenity. Wiseman tells Demande to crush them. Black Lady laughs. The three Guardians attack their new attacks and Demande blocks it. 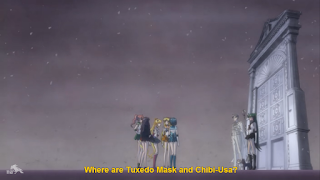 The place starts cracking. Rebeus runs out, Wiseman stops him, he questions him and asks who he really is. Black Lady says he is coward. Wiseman kills him. They use the time key and get out of there. Wiseman wants them to return. Tuxedo Mask keeps looking for Chibi-Usa and finds Black Lady glowing above him. She grabs him and laughs. Pluto teleports the four Guardians to her realm where King, the cats and Venus are. The give girls reunite. Usagi asks where Tuxedo and Small Lady are, Pluto and King explain about the storm. To Be Continued... 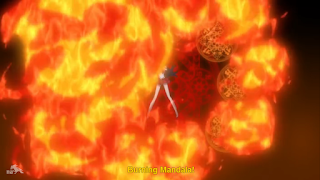 Episode Review:
Next ep is called "Covert Moves - Wiseman," which introduces Black Lady. So after six or seven eps, we finally get Jupiter, Mars and Mercury back and Rebeus finally killed... even after Esmeraude. In the manga and first anime, Rebeus died before Esmeraude. Much like the Manga does, Saphire's droids were lightly introduced and then killed off. We got Usagi possessed Neo Queen Serenity before the same spot in Sailor Moon R. I like how things are unrolling here better than in R. I liked this ep, except for Demande, he is just another pawn just like in R. But Saphire is radically different than in R, he was much more sympathetic character in R. I also like that we see Pluto more here than in R.
Posted by Lavender Ranger at 9:16 PM