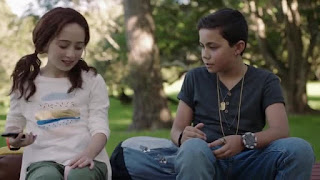 "Happy to be Me"
Tynamon wants to use Odius' hammer and the stolen Fusion star, so he steals Levi's voice and trades voices. In order to use the stars, he needs the voice. Levi asks Preston for a spell to reverse it. Victor and Monty make fun of Levi's voice and Brody convinces them he is contagiously sick. They run away. Preston looks through his book and found a spell which Levi pushes him to use. Preston uses the spell but it shrinks him to the age he was when Galvanax attacked. Levi still has the voice. Buzzcams are detected and five Rangers go off. Levi leaves sadly.

Tynamon has the star and shows it off. Skullgators are released and combined to make Megamauler. The Rangers morph and enter the megazord. The megazord falls apart and they escape. Tynamon berates Megamauler and he shrinks him to human size. He leaves and Tynamon goes after him. Levi is made fun of by kids at the park and befriends a little girl. He calls himself Aiden. Victor and Monty are in hazmat suits at school. Preston apologizes to Levi. Levi says its okay, he says its not the end of the world. He says he is happy to be me. Preston finds a seperation spell and brings Levi back with voice and all. Tynamon has Levi's voice and it changes back. He finds Megamauler on the ship.

Megamauler doesn't want to fight. Tynamon says he is scared and ricks him to go back. Mick gives him Superstar mode. The Rangers morph. Levi dons the new mode and fights the monsters. He destroys the monster and he fights Tynamon. Red goes to fire mode and the other Rangers help. Levi defeats Tynamon and heretreats. The Rangers take the Fusion star back. Megamauler is made big again. The Rangers call the Megazord, combine the Blaze Megazord and Ultrazord and destroy the monster. At the park, Levi surprises the little girl who helped him and asks if she wants to play ball with them. The boy who bullied Levi asks to play with him, he asks the girl and she says yes. Victor and Monty get their masks knocked off and roll in the mud.

Review:
They should have more villains with sexy voices like Jordi Webber, it makes them more interesting.
Posted by Lavender Ranger at 12:30 PM