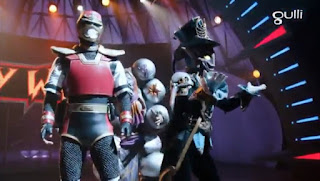 Cosmo Royale reveals Blammo at Galaxy Warriors. He shows off his bomb powers. Space police arrives. He is recognized as Sheriff Skyfire and is about to arrest Blammo. Cosmo tries stopping him. Madam Odius tricks him, telling him the Power Rangers are thieves. He goes after them. Back at school, a security guard tells one of the students no skate boards and he takes it. Victor and Monty want to be secutiy guards and sign up as deputies. They bother some girls. Hayley feeds her dog Kody. The officer writes her up, that dogs aren't allowed. Hayley takes Kody out. She accidentally puts a can in the trash and he writes her up again. The Rangers get called. 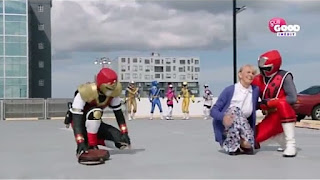 The Rangers find Sheriff Skyfire in a parking lot. The Rangers morph.  They fight Skyfire. A blast gets reflected and harms a woman. Red Ranger and Skyfire help her. They explain they fight Odius. Skyfire finds out Odius is the bad one. The Rangers de-morph and he asks for a full report of the monsters they fought. Hayley gets a text from the principal. Spycam sees this. Odius doesn't care and sends Blammo. Blammo arrives at the junkyard and plants a bomb in a trash can. Victor and Monty arrive in scooters and make up their own rules and confiscate stuff they want. Hayley talks to the principal about her writeups. Principal wants her to seperate recyclables and trash at the junkyard and she helps the security guard. He shows her. He puts the bomb in the recycables. 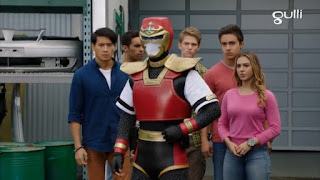 Clint wants to quit. Hayley feels bad. Skyfire tells her to put herself in his shoes. She takes the Tiger blaze zord to find Clint. The Rangers and Skyfire stop Clint and find the bomb. Hayley puts the bomb down a hole and it explodes. She thanks Clint. Blammo arrives and Clint leaves. The Rangers and Skyfire fight him. Skyfire does his signature move. Red goes to lion fire mode and uses Skyfire's sword. Blammo grows. Blaze Megazord fight Blammo. Skyfire must go and White thanks him and he leaves. The Rangers show Clint a new machine to help him out. Hayley apologizes to him and ask him not to quit. He tells them he met the Power Rangers. He says he'll stay. Kids come to ask for help. He helps against Victor and Monty for confiscating so much things. Victor and Monty turn into giant blueberries.

Review:
Skyfire is Jiraya, a metal hero from 1988. He appeared as a guest in Ninninger because he is a ninja. This is the first time a Metal Hero guest with Power Rangers. He is the seventh Metal Hero to be adapted into English, following Speilban, Sherivan, Metalder (VR Troopers), B-Fighters, B-Fighters Kabuto (Beetleborgs) and Jansperson (Beetleborgs). 2018 is technically the 30th anniversary of Jiraya. As Gavan New Type appears in Go-Busters footage, fans are hoping he gets adapted for Beast Morphers. Some fans hope he gets adapted as a VR Troopers as he looks like one of them. Kenner did make the toys and Hasbro absorbed them and we are assuming Hasbro now owns Saban’s rights to VR Troopers.

Posted by Lavender Ranger at 2:57 PM