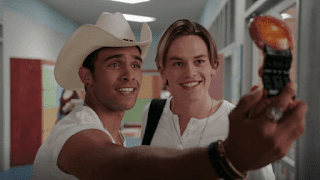 At school, Simone Swift proposes Levi with a burger ad. He declines and she leaves. Chaz a fan introduces himself.  He shows his autograph and he says how much it means to him. Levi tells him his manager wrote that. He offers to hang out. At the Galaxy Warrior ship, Dreadwolf changed Cosmo into a werewolf. He returns him to normal. Simone find Victor and wants him to model in a burger campaign and he agrees. Calvin brings Mick to a store, asks if he needs a hand and he says no Buzzcam goes by and takes video of Calvin. Calvin is freaked out and tells the Rangers. Levi is stopped by Chaz. 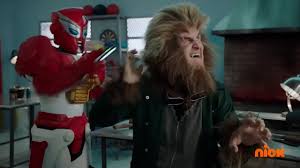 The Rangers reunite with Calvin and morph when Dreadwolf arrives. Dreadwolf blasts Levi down. Mick sees the action. Dreadwolf throws three claws at Levi and it ends up on Mick. The Rangers go to Mick. Mick says he's okay. In shop class, Chaz is dressed like him. Levi says he is annoying him. Mick arrives and looks like a werewolf, the Rangers hide it. They go to the base. Chaz stops Levi. Chaz tells him he told his friends he would sign some stuff. Levi tells him to give him some space and they aren't friends. Mick shows werewolf behavior. Rednot says the claw is stuck in his head. The Rangers remove it and it dissolves. Mick returns to normal.

At the park, Chaz tells his friends Levi isn't coming. They call him a liar and leave. Dreadwolf attacks an throws a claw and it hits Victor. He then hits Chaz, thinking it is Levi. Victor turns into  a werewolf during his burger commercial. The Ranger survive and find the Werewolf Chaz. The Rangers morph and fight Dreadwolf. Levi tries talking to Chaz. Levi sings a song and it calms Chaz and he takes out the claw and returns him to normal. Mick tells Levi to use the lion armor and he morphs. Levi arrives and uses the armor. He grows big and the Rangers use the Megazord to destroy him. Chaz is telling his story when Levi arrives and they talk. He apologizes. He says he knows he can a bit much at times. Levi surprises his friends and he will sign his stuff but they play music. Back at the school, Monty bates Victor with a burger and takes the claw out to return him to normal. The agent comes back saying they want to be a werewolf again for the ads. She leaves when they say he can't. They could've just use makeup.

Episode Review:
An uncomfortable episode. I don't like werewolf episodes. Also an overzealous fan episode too. I know what it is to be in Levi's position and Chaz's and it just isn't a good for either side.
Posted by Lavender Ranger at 2:33 PM