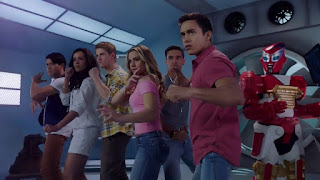 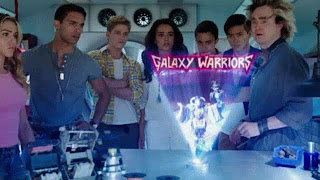 The Rangers return to school and Dane, their dad. He puts his trophy back. He leaves. They see a commercial for Victor and Monty showing off Monster Repellent. Victor and Monty announce they are not going back to school and they are rich and donate a million dollars to the school. They reveal a Victor statue. He remembers escaping from the monsters by farting. The Rangers ask how they escaped and they deny telling them. The Rangers go to the base. Mick teleports to them and they all hug.  He tells them that Galaxy Warriors is back. They have the Nexus is broken and with them. The statue is at the park and buzz cams are flying around. The Rangers are in their ninja suits. The monsters arrive and Smellaphant thinks the prism is in the statue. 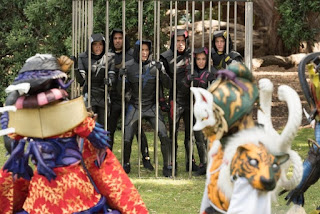 The humans spray their repellant and the monster takes it and Badonna blasts at the,. Preston casts a spell and tries trapping the Monsters. Odius traps them instead. Odius takes the Prism out. She revives it and turns it evil. She shows off the Ninja Super Steel and puts it in the prism to make her own stars. Preston helps them escape. The Rangers take the super steel. Mick recieves the super steel. The Rangers fight and knock Odius down and the Nexus spell is broken. Nexus spits out Power Stars for the Rangers. Odius and Badonna leave and the Rangers morph. They fight Smellaphant. Red dons the lion armor. The Rangers blast him. Levi does his star morph. combined with the flame strike from Brody. Smellaphant goes down. Cosmo Royale makes him huge and the Rangers call the Lion Fire Zord. The Megazord is formed and fights the monster.

Odius says something menacing. The Rangers put the Prism back. The Rangers ask Mick if he's going back to the Lion Galaxy and he says he'll stay. Back at the school, Victor and Monty are broke and people want refunds. The principal confronts them about the check. They grovel to be taken back. The repellant is broken and stinks up the school.

Episode Review:
It is pretty bland for a premiere. It is so redundant to have the Rangers lose their powers and regain them. And to just tease Sledge was cruel. It just makes Odius look weak in comparison, with no passion or quirks. She has her mission, her goal but we know zip about her. Sledge at least we know has a weakness for his wife and looks for fun when stressed. Advice to Hasbro is if they do this 'super' second season again, don't make the rangers lose their powers. Just make the last season a cliffhanger and resolve it in the second season premiere.
Posted by Lavender Ranger at 12:57 PM