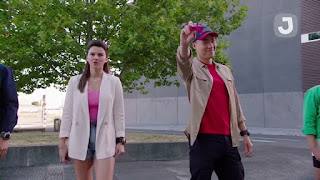 A museum curator is being interviewed about a Purple Beard exhibit and Amelia's grandfather Ed saves Beatrice from a falling stage light. She asks him on a date. Amelia is excited.  Void Knight watches the BuzzBlast news and wants the talismans. BoneSwitch switches the bodies of Slyther and Mucus, they have each other's voices like in Dino Charge. Void Knight tells BoneSwitch to switch the Rangers. Amelia is looking up blazers to change her grandfather on a laptop and the other Rangers comment in the Dino Base. Zayto asks why change him, it doesn't make sense. BoneSwitch attacks and searches for the Tailsmans. He finds nothing in a box. The Rangers arrive and then Hengemen. The Rangers Morph. BoneSwitch switches Zayto and Amelia, switches Ollie and Javi. Izzy and Aiyon get out of the way, they do not get switched. Aiyon and Izzy fight the monsters. The switched Ranger try morphing but they can not. Aiyon slashes BoneSwitch and he falls. Aiyon gets the Electro Battle Armor and blasts BoneSwitch, who fleas. 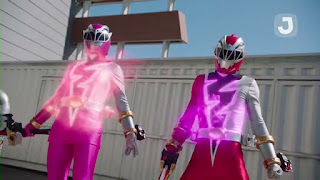 Back at the base, Amelia tries to raise Zayto's antennae. Ollie as Javi says their connection to the Morphin Grid is disconnected. Amelia says Poppop needs her help. Amelia convinces Zayto to do with a headset. Later, Zayto as Amelia helps Poppop, the cologne says might attract bees. Poppop puts too much. Amelia as Zayto puts on the headset. Ed arrives at the date. Amelia tells Ed what to say. Beatrice brings soup. A bee arrives and circles them. The bee lands on Poppop's face and he smacks it and the earpiece goes in the soup. He says it is a hearing aid and runs to his van. Zayto as Amelia comes over. Ed wants to put more cologne. Zayto as Amelia says you don't need fancy clothes, show he is fun and clever. Ed agrees and kisses Amelia's cheek. He goes in his overalls. Zayto as Amelia tells to trust him and Ed. Ed goes in his handyman clothes and Beatrice recognizes the grease on his clothes, as her father was a mechanic. Amelia thanks Zayto as they get along. Back at the base, Ollie in Javi's body says their energies are still with them, so they have to morph with their keys. The Rangers switch keys. The six morph in front of BoneSwitch. They morph and they return to normal. BoneSwitch switches a pigeon with Aiyon. Zayto puts on the Blazing Battle Armor and the others put on the Boost Key arms. BoneSwithc grows big and the zords are deployed. The main 5 slashes at the monster. They make the Megazord Warrior Formation and enter the cockpit. They fight the monster. They cut off his horns. They return to the right bodies and de-morph. They swap keys and morph. Aiyon switches back, he morphs, and enters the Megazord. The monster jumps away. Mosa Racer Zord bits him from the ocean. Mosa destroys it with its tail. Void Knight gets the Sporix. Later at the museum, Ed got a job to restore things and Amelia apologizes to him for trying to change him. They hug. Pop Pop says the bowtie was ugly. He shows Ollie's mom, Beatrice, and Amelia that there are puzzle pieces supposed to come apart and they form Purplebeard. His Talismans look like Ranger Keys and the puzzle looks like DinoHenge. Amelia goes off to tell the Rangers. Beatrice kisses Ed. The Rangers meet with Beatrice, Ed, and Ollie's mom at Dino Henge. Zayto uses the Vision Boost Key to track something under Dinohenge and finds a box with two keys.

Body swap episodes are usually really fun or really boring. This one runs the gamut. The Amelia stuff can get boring when the obvious answer is in front of her but she doesn't listen. Zayto of course, being the calm one figures it out early. It is nice to see Poppop get storylines though. I thought Ollie and Javi's body switch should have been more explored, much like the body swaps in Dino Charge. The Aiyon/Piegon swap reminds me of the Antonio/Fish swap in Samurai.

Posted by Lavender Ranger at 12:02 PM