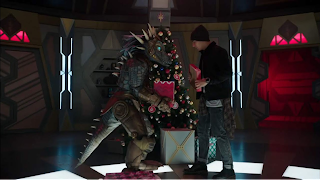 Episode Summary:
At the mall, Javi sings and plays the keyboard. Izzy arrives and asks how it is going. He has no replacement key to his keyboard. Izzy asks if he got his Secret Santa present. They only have an hour for the exchange. Izzy leaves Javi. Javi goes to talk to Santa and he gives him the idea to get gloves. Santa shows him his magic sketchbook and to make real gloves from a drawing. Javi says no thanks. Meanwhile, Slyther and Mucus are lurking and want revenge for Void Knight. They get the idea about the book. At the base, they put the tree up. Javi teleports in with a topper, a star. He puts it on the tree. Amelia teleports in, with letters from Power Rangers teams. Aiyon asks for Solon. Javi has a glove gift for Solon, Solon has claws, not human gloves. Javi feels bad. He says Santa is the expert. Aiyon has no idea who Santa is. Aiyon got a Power Sander, thinking Santa was Sander. Amelia and the others go to get a gift. Javi stalls with Solon while they get her gift. Javi asks Solon if she wants to do Christmas Carols. Solon says it feels bad that she can't keep track of the singing. Javi opens a fan card and Mucus sends a holo message. The back is attacked. Mucus says Kaboom, it disables the coms and teleporters. There is a 10-minute countdown until the whole base explodes.

Solon checks on the computers, they are stuck in the base. Javi thinks one of the gifts is explosive. Javi opens a gift for Izzy, it is an electronics kit--a flashback to the episode where Ollie taught Izzy about electronics. Javi thinks Ollie got it. Javi and Solon open Ollie's gift, it is a ghost rain poncho. Ollie and Amelia met this way--flashback to episode 1. They know it is from Amelia. They have four more gifts. The other Rangers get a message from Santa. Santa says his sketchbook has gone missing. They bump into Mucus and Slyther. They mention a bomb. Zayto tries calling the base but no answer. Slyther gets art supplies and they draw something on the book and create a new monster. The Rangers morph and call the Zords. Zayto calls the Zords. They combine T-Rex, Dimetro, and Mosa to make Fusion Ultrazord. They fight the Spider Monster. Almost six minutes to go, Solon opens a cold gift. It is ice cream for Aiyon. Flashback to Aiyon saving an ice cream truck. Javi says Flagron--a Rafkon food, so it must be from Zayto. They then find a punching bag gift for Zyato. They flashback to Izzy and Zayto joining a gym. They know the gift is from Izzy. So they have one more gift---Solon made a key for Javi. He adds it and thanks her for it. 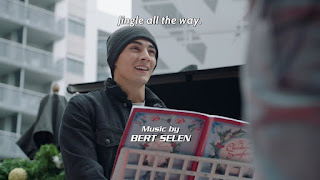 They only have Aiyon's Sander, they can't figure which one would be a bomb. The star he put on the tree was a star he got in his guitar case from a guy--it must have been Slyther in disguise. Solon thinks of putting the bomb in a container they sue for Sporix. It explodes and it is contained, only a  minor inconvenience. They get communications back. The Ultrazord destroys the monster. The Rangers teleport out of the Megazord. Slyther is about to draw something else on the sketchbook. Javi appears, all six use their Booster Keys and fight Hengemen. They destroy the Hengemen. Red demands the book. Slyther makes the book huge and draws a huge Slyther. The Rangers call Zords again. Mosa Razor Zord and Dino Fury Megazord Warrior Formation are formed. They race towards Giant Sluther and fight it. They slash at it and destroy the big Slyther. Regular Slyther is sad, Mucus comforts him. Back at the base, Javi apologizes to Santa for the book. The Rangers thanks Santa. They exchange gifts and thank each other. Javi says great gifts come from the heart. He comes up with giving Solon a Christmas Songbook, to help her not be nervous and get in the Christmas spirit. They sing Jingle Bells.

Nice to see Santa again, after 11 years of playing Santa on Power Rangers. Cute clipshow but it shows how clueless Javi is, making me remember Tommy Oliver.