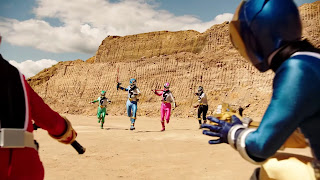 At night in DinoHenge, Aiyon is having a nightmare--of a past event. He and the past Rangers are in the base. The old Blue Rangers says the zords are not enough against the Sporix Beasts. Zayto has an idea to use untapped grid energy to create a new Ultrazord. They all agreed. They entered the Ultrazord and used Primal Extreme Blast against millions of Hengemen and a huge monster. It makes a large scorching line on Earth. The old Black Ranger says it is too powerful. The Ultrazord overloads. Zayto says to eject. An explosion occurs and Aiyon wakes up. He tells Zayto, Zayto says he always has that particular nightmare. Aiyon asks if he thinks thye should've made another choice but Zayto says they must get sleep as they must wake early to help Dr. Akano release the two hidden Ranger Keys. Meanwhile at the evil base, Mucus plays with the Sporix machine and it looks like a disco--with light and sound. Void Knight says it will make her cooler. Mucus gets a gold costume and dances with the Hengemen. Slyther wakes her up from her dream. She is touching the machine and stops touching it when Void Knight arrives. Void Knight says it needs to fill up in order to activate it. Dr. Akaana gives the box to Zayto--they are two Battle Keys. Light and Shadow Keys---it can make Black Holes. Both can make the Cosmo Key, which can open portals. Aiyon says they have to find the Zords. Solon recalibrates the zord tractor and says the zords ended up stranged on the planet Nibyro.

AIyon makes the Cosmic key and puts it in his blaster. He opens a Cosmic Gateway. Amelia laughs that it is an alien planet. The portal is unstable, Zayto goes in. Zayto is scanned. He finds four Power Rangers--Blue, Black, Pink, and Green (with skirt). The Rangers draw their sabers. Zayto is happy but the portal closes. Aiyon tries opening a new one but without the zords nearby, they can't get there. Izzy asks why they would attack them. Aiyon says they think the others didn't make it. They wonder how they will get Zayto back. Dr. Akana shows them that the statues are linked to the Power Rangers. Her machine powers up and the Morphin Grid shows up. Aiyon says the key needs power. He touches his Mosa statue and powers up the key. Void Knight, Slyther and Mucus watch and get an idea. They leave. Dr. Akano's machine overloads and she leaves. Ollie uses a fake voice for his mom not to know it is him. Aiyon goes through the portal he opens. 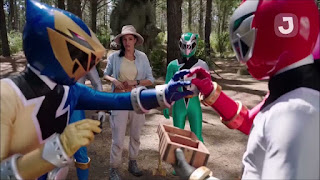 Back at the evil base, Void Knight talks to his comatose love without a mask, he talks about the Morphin Grid. He releases Reaghoul and gives him a job. He is to revive Boomtower. Void Knight tells him to get Ranger Revenge. Boomtower wants a Sporix and the Hengemen get a Sporixfrom Slyther to use. Back on the alien planet, Aiyon looks for Zayto---who is getting beat up by the Rafton Rangers. Black Ranger keeps saying "It's too powerful." The other Rangers keep repeating things from the nightmare. Aiyon fights too. Aiyon recognizes they are from his dream. They figure out they are nightmares come to life. Meanwhile, the Earth Rangers fight Boomtower. His 'new trick' doesn't seem to work. Amelia mocks him. The Rangers morph. They get blasted back Boomtower throws cannonballs again. Javi uses his key and an explosion goes off. Ollie calls Solon for help.

Aiyon and Zayto recreate the positive part of the dream and the dream Rangers disappear. It becomes  blue and purple ball. It is a guardian and proved they mean no harm. Solon sends a message. Aiyon opens a gateway for Zayto. The guardian tells him to follow him. Zyato arrives and uses the Hyper Dino Key against Boomtower. The other Rangers use Boost Keys but Boomtower takes them down. Javi figure gas come from the cannonballs. Hengemen arrive and an explosion occurs. The Rangers fall down. They figure out a spark can make the invisible gas blow up. Aiyon finds the twin zords and thanks the Guardian. He creates the gateway and leave with the zords. Aiyon drops in with Boomtower. He uses the SHadow DIno Key and makes the Shadow Battle Armor. He shoots the cannonballs and they get sucked into a Black Hole. Boomtower grows. Mosa Zord and the Shadow Raptor Zords are sent. Mosa becomes the Mosa Razor Zord. He combines the Shadow one with his Megazord making the Mosa Shadow Megazord.  The others make the Dino Fury Megazord Warrior Formation and Aiyon calls the saber. He does the SHadow Megablast and makes a Black Hole that destroys Boomtower. Solon tells them to go to Void Knight. Solon tells them Void Knight took Dr. Akana's equipment. 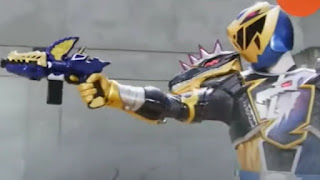 Great episode, great continuity. Introducing Aiyon gives Zayto more depth than just the calm leader, shows a darker side. But unfortunately, I still don't have a lock on who Aiyon really is. Sometimes Aiyon comes off as a showboating jerk ("Our Hero") and other times as a Lancer (Trope where the character is like a cool bad boy who sometimes has reason and clashes with the leader), here he comes off as a rash younger brother to Zayto. As usual with the sixth Rangers (ever since Tommy), they aren't clearly defined. The one Sixth Ranger I say was clearly defined and are complex was Quantum Ranger from Time Force. I'm not counting other extra heroes who are like Sixth Rangers but aren't technically number six like Trent, RJ, Hunter, Bake, and Nate. Plus, no comic relief needed like Jane, J-Borg or even Poppop.

Posted by Lavender Ranger at 12:38 PM