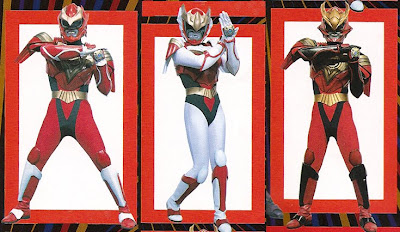 In 2003, this new tokusatsu show started outside of Toei company (Super Sentai and Kamen Rider) and Ultraman, it was called Chouseishin Gransazer. It was made by Toho Company Ltd. (Godzilla), and Konami (the video game company). It was unique because it had a lot of heroes, 12 in total. What was smart was they made 4 teams, they called them 'tribes' and 3 in each one. They started out with two teams and later went on episodes later for the third and the last team by almost to the end of the series. The theme was Astrology, the 12 used in horoscopes. 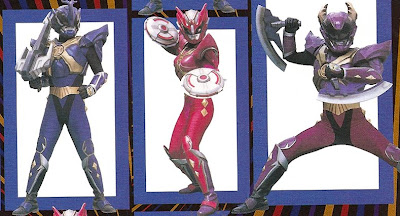 I have seen the first half of the series and I liked it. It is the first in the "Seishin (Star God)," the second (Justirizer) only had three heroes (I also saw that one and it was pretty good) and the last one (Sazer-X) were three males (no girl)--I haven't seen it, but I heard it wasn't as great. The Seishin series was more like Super Sentai than Kamen Rider with their giant monsters and giant machines that changed and combined. I be a fan of the Tokusatsu heronies, I love that there are 4 heronies in Gransazer and they were all good characters. 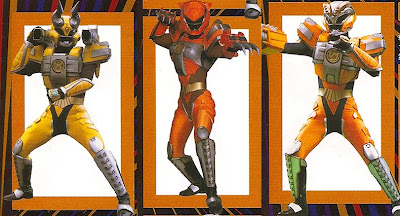 My favorite was Sazer-Visuel (above), the girl from the Earth Tribe. She usually hanged out with the Flame Tribe, which was the main protagonists. I like how it had Tokusatsu mainstay characters like the shy one, the unsure one, the loner, the energetic one, etc. I loved the episode where surgeon Sazer-Remls (the leader of the wind tribe) had to operate on someone and Sazer-Tarious (the main protagonist) called his integrity into question as he was teamed up with an evil alien and didn't want to admit it. 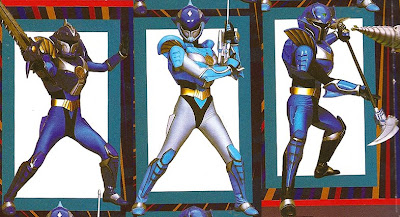 Design-wise, I didn't like that green was not used, they could have had more diversity in the colors with the Water Tribe. Because Sazer-Gorbion and Sazer-Gans look like the same shade of blue, and officially close to the color of Sazer-Remls. I like the different shades of colors overall, where the Flame Tribe is red, Wind Tribe is purple-ish colors, Earth Tribe is orange and yellow, while Water Tribe was blue. Also, it was strange that the animals of the actual horoscope was not used sometimes and some other animal was used, like how Sazer-Gorbion was Scorpio but his theme was shark. And Sazer-Gans was Cancer (crab) but manta-ray-themed.

Posted by Lavender Ranger at 12:03 PM

I've watched Gransazer and I LOVED that show!! I'm surprised in Japan they making Way too many Tokusatsu shows. Also the series is called "Chouseishin" is where Gransazer, Sazer X and Justirisers come from. If you know already. Sadly it lasted 3 seasons and it closed.