On Being an 'Old' Power Rangers Fan 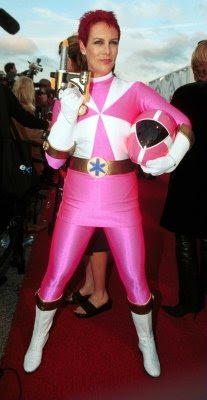 There are different type of fans but I do not know how many there are. But there are those fans who watched Power Rangers when it first came out in 1993 and fans that grew up with Power Rangers and of course, those who are under 12 and are learning about the fandom. The other day I saw a curious post on a board about 'adult' fans, if there were older people who liked Power Rangers. I fall on the latter, where I was 11 when MMPR came out. I was a rather 'old' in age to be a fan, I was made fun of in middle school, all my fellow students felt PR was for little kids. Nowadays, not one second-grader would be caught dead with a PR bookbag or jacket, where as a kindergarten kid would proudly have one. 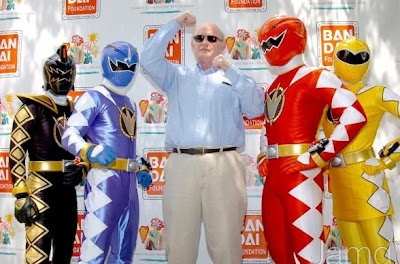 [Dearly departed Peter Boyle with the Dino Thunder Rangers in 2004.]
Update June 12, 2009: Peter Boyle was just at an event. I don't know for sure if he was a fan. I also have pictures of the Rangers with David Boreanaz, Michael Chiklis, Tony Hawk, Molly Sims, Jeff Probst and Rosie Perez.

I am open about other aspects of my life but not so open with new people or co-workers that I like Power Rangers. When I was 16 and was first into the internet fanbase, I was surprised to hear of 25 or 28 year-old fans. It did humble me though. I am now a 26-year-old fan and don't see anything wrong with it. I have met and spoken to Tokusatsu fans that are over 30 (of course because Tokusatsu has been around for more than 40 years). Most of the people I know around my age are not into it, but younger do, I have a friend that is 20 and grew up with PR and loves it. When I was about 20 or so I thought maybe my obsession with it wouldn't last (and working on my sites) but now I accept I will always like tokusatsu. I now accept that I will be working on my sites and blogs for a long while. Even if PR ends, I still have Kamen Rider and Super Sentai.

Posted by Lavender Ranger at 7:58 PM

What a surprise!! I'm 24 years old and I still loved Power Rangers because of my childhood memories. I love the Saban PR but with Dinsey some of it's alright and some is not. I love watching "Entertainment" like comedy, action, adventure and playing games.

Well I guess u can add me on that list. Im 24 and still love it when it first came out. I have seen every episode since MMPR and still watching RPM. Hey being a fan helps me especially now. Im a nursing student and during my pediatric rotation being a fan help me get close to the kids. Go go power ranger!!!!

rmj85, I know you feel because I am a substitute elementary school teacher which lets me be in different grades and see the difference. It's great with the little ones.

Wow. I didn't know Jamie Lee Curtis and the late Peter Boyle were fans. I'm in my 30's and still like watching Toku shows.

I'm 27 and have been a fan ever since I saw Mighty Morphin Power Rangers start on UK terrestrial tv in 1994. I wear a PR hoodie whenever I go out and don't care. If you a true fan of something you shouldn't act like you aren't! Who cares what other people think! I know I wouldn't get on with most people anyway so why would you give a &^%$ about them! Power Rangers Forever. By the way I live in the UK.