I thought it would be interesting to compare the Super Sentai and Kamen Rider of their corresponding years, for example Hurricanger and Kamen Rider Ryuki that aired on the same year. According to an producer in a interview, the only time the Super Sentai team talks to the Kamen Rider production team talk is in the beginning to amke sure they are not doing the same theme. And that's it, then if they have corresponding things, it is not their fault.
There is not much in common between Kamen Rider Kuuga and Timeranger or Agito and Gaoranger...

2000
Timeranger and Kamen Rider Kuuga
Nothing in common, Timeranger had 6 members and Kuuga was just one guy. Well, they both dealt with police of a kind.

2001
Gaoranger and Kamen Rider Agito
Gaoranger was about nature and Agito had police force, so very different. Above is a little picture celebrating the two shows. 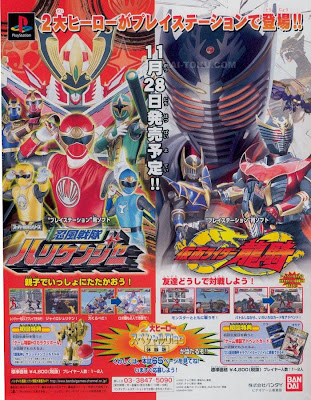 2002
Hurricanger and Kamen Rider Ryuki
Even though there was 6 warriors on Hurricanger and double that on Ryuki, what they had in common was in emotion, where there was one antagonizing another. Above is an advertisement for the video games. 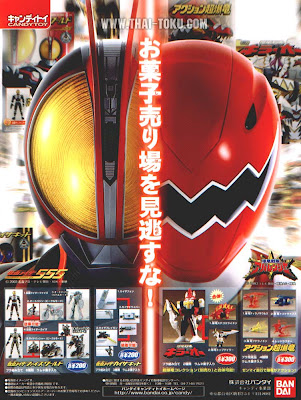 2003
Abaranger and Kamen Rider 555
555 was more serious than Abaranger, but they both had ancient tribes (Orphnochs and the Ryuujin). And both series had one character that found a truth about themselves (Mikoto and Takumi). Above is an advertisement for the candy toys. 2004
Dekaranger and Kamen Rider Blade
Nothing really. One is the police and the other was not, Blade started in the middle and then we saw the past and future. Dekaranger was a single-episode sort of show, no real over-stretching arc, while Blade was very arc-y. Above is the poster for the movies. 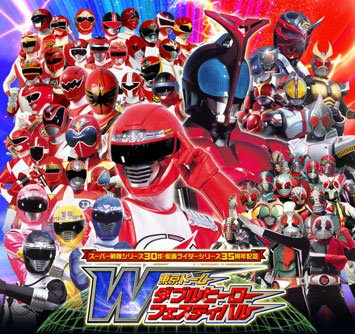 2006
Boukenger and Kamen Rider Kabuto
Both very popular, Boukenger was a symbol of the 30th anniversary of Super Sentai, while Kabuto was very true to its roots, dealing with insect-theme. Tokyo Dome City event picture above. 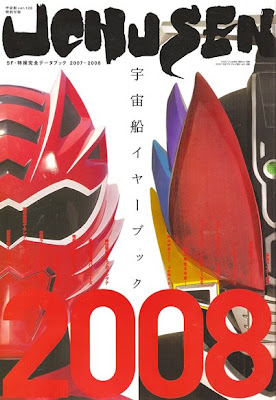 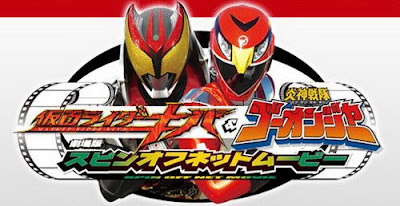 2008
Go-Onger and Kamen Rider Kiva
Kiva had more in common with Den-O, but both Go-Onger and Kiva had little buddies that helped the main heroes. For example, the Kivats and the Engines. Movie roadshow logo above. 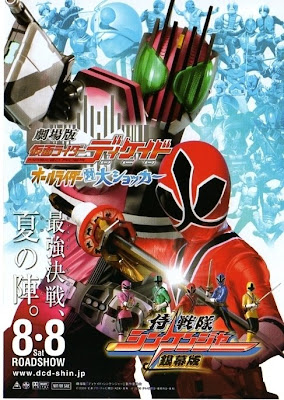 2009
Shinkenger and Kamen Rider Decade
Nope, nothing in common. 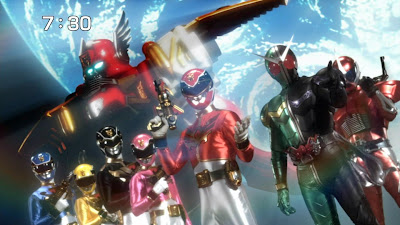 2010
Goseiger and Kamen Rider Double
Well, Goseiger seems to have more in common with Decade as they both use cards. But Decade did end before Goseiger ended. Goseiger insert things on their guns like Double inserts things to his belt to change his image. And Shinkenger inputed things as well. So that's the one thing in common.
Posted by Lavender Ranger at 8:03 AM