I don't even know if this is going to work. My mac decided to crap out on me once again. Don't believe the commercials for Mac guys! I am going to try to get the episode online but I don't know if I will be able to.
UPDATED 9/18/09 2PM EST
Episode Review 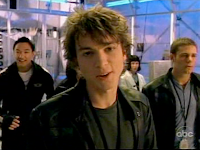 Okay, it is kind of hard to summarize this episode because of its format. First the seven get an alarm of an attackbot and they run off, but stop in place, they freeze. Ziggy spooks the audience and says things are going to be a little different. He is sitll Ziggy and says he will show behind the scenes, he tries to teleport and finally does when he has his morpher. We see the cameras and background. Then Ziggy tries to get into Flynn's jeep. Flynn stops him and they review the vehicles they use, including Ziggy's bike. Then Flynn goes over their stunts on the vehicles. Then we see Summer and Dillon and they go over the stunts they o, with grip and safety instructions. Looks like they actually get to do cool stunts.

After the commercial, Ziggy goes to Dr. K and asks to show off the arsenal. Dr. K says she is too busy. Ziggy gives Dr. K marshmellows. Dr. K shows us special and effects. Cleaning away wires and use of green screen, all the use of the computer. ZIggy asks for more, offering her an apple, she declines and eats her marshmellow. We then see the Grinders chill-laxing and then serve Tenaya behind trailers. Scott goes over the villains, saying they are stubborn. We see them fighting, he says the camera moving adds to the action. That thye put together sound effects and props. Funny enough, they don't mention wire-fu. We see clips from previous episodes of the fights. Scott fights Tenaya, says you should never fight a girl, but since Tenaya is an evil robot, it's okay. Tenaya overpowers Scott, saying not to believe men are stronger. They talk about the stunt team, that has been working 'for years.' and teaching the new cast stunts to do.

After the commercial break, Gem and Gema goes over the explosions. They of course have to say that they are really got. They say when they are running away, they are really running away. They say safety is always important. They prepare to shoot a shot. They volunteer Ziggy, he declines. Then the six have morphed and Ziggy makes a mistake. They then show bloopers. Pretty mnild, just flubbing lines, misplacing stuff, unable to do the morphin sequence properly. The nice ones are the door closing in on Scott, and Ziggy dropping pink putty on Gema from his mouth. After the commercial break, Ziggy says they are going to watch the movie. Everyone sits down with popcorn. Dr. K comes in her pajamas and slippers. Dillon asks who let the dogs out. Dr. K was told by Ziggy that it was going to be a Pajama party.

Ziggy says they all voted they look ridicilous. He then says it is time to enjoy the fruits of their labors, showing the apple from before. They watch the video, Flynn fighting, then Scott, then Ziggy and Dillon and Summer coming in. And last but not least, the twins come in. And Scott fights Tenaya. Tenaya blasts the twins and explosion occurs. The others help them up. The seven morph and they fight the Dowsing Banki from Go-Onger, which Ziggy refered to as female before, she was female in Go-Onger but the monster sounds to have a male grunting voice. The Power Rangers fight the Grinders. You'd think they'd mention the stuntmen, but I guess they want kids to believe it is them in the suits. The movie credits has 'scott as himself, ziggy as himself, etc.' The alarm goes off, Ziggy whispers to us that Dr. K will make him the new Red Ranger. Scott says he is not going anywhere but Ziggy will.

Review: Cute, they went over the basics that goes to making a show, but didn't bore too much. They probably kept them in character for the kids.
Posted by Lavender Ranger at 5:36 AM