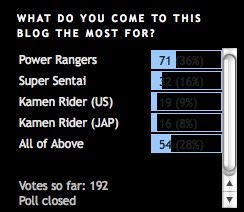 Basically, the majority of people come here for Power Rangers and the second reason is everything else. The least reason is for Kamen Rider, the original version from Japan. 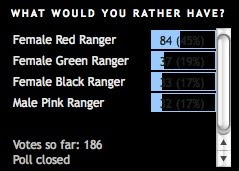 Basically everyone wants a female Red Ranger. The least anyone wants is a male Pink Ranger. And not surprisingly, people rather have a female Green Ranger than a female Black Ranger.

Related Topic: It's a Girl! The REAL Shinken Red

Posted by Lavender Ranger at 5:28 PM