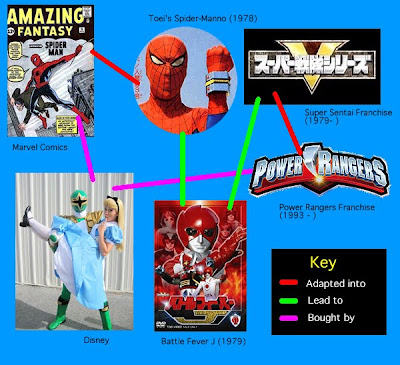 In 1939, Timely Publications began, and by the 1950s, it had generally become known as Atlas Comics. It adapted the name Marvel in 1961, and with the success of Spider-Man (who first appeared in Amazing Fantasy in 1962), it lead to a team-up with Toei Company Limited of Japan in 1978. Spider-Man was adapted into a tokusatsu with a robot and new origin, he would transformed with a brace. It only lasted one year. The second co-production between Marvel and Toei was Battle Fever J, which originally was going to be based on Captain America. It became a group series instead, taking a hint from Goranger and JAKQ, Battle Fever J started the Super Sentai franchise. Until 1994, Goranger and JAKQ were not counted as part of Super Sentai. Anyway, Marvel and Toei never collaborated again, Super Sentai continued but only under Toei's reign. Haim Saban found Sentai and decided to adapt it in the early 90's and made the Power Rangers franchise. In 2002, Disney bought Saban's share of Fox Kids and Fox Family, including the Power Rangers.

Disney started shooting the Power Rangers in New Zealand. In corporation with Disney, Toei shot footage for Mahou Sentai Magiranger (2005) and Jyuken Sentai Gekiranger (2007) in New Zealand. In 2006, Disney teamed up with Toei Animation to Robodiez, an action-adventure series that will combine live-action and CG animation. In 2008 it was announced Disney would make a short children’s animation series to be aired in April in Japan called Fireball. And recently it was announced that Disney bought Marvel. I think it is an interesting cycle. I think only some Spider-Man fans know about the tokustasu and mainstream people are unaware of this connection.

I also forgot to mention that Marvel produced Power Ranger comic book issues, they did it in 1995-1996, did six issues, featuring the Ninja Rangers, and VR Troopers (Season 2). VR Troopers had their own separate comic on the other side. Marvel started doing Power Ranger comics with the adaption of the MMPR Movie, PR comics had already existed before then.
Disney buying Marvel perhaps effecting its relationship with Toei has been discussed in the forum Rangercrew.

Related Topic: How Does Disney owning Marvel have to do with the Power Rangers?
Posted by Lavender Ranger at 3:46 PM

And now Saban took Power Rangers back and gave it to Hasbro.