Like every non-Red Ranger Battlizer, it happened in toys. Since Power Rangers in Space, Blue, Green and Black Rangers got battlizers too but didn't appear on the show. Girls did get some special armor in the toys but it only happened in two season toylines. 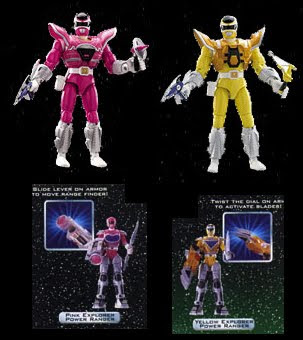 With In Space, the Pink and Yellow Rangers got Astro Armor. There were really rare since they were the only 8 inch figures with armors. There were also the 'Lunar Power Rangers' but they all looked like the Robo Voyager, just in different colors (all six including Pink and Yellow). And then later in the Lost Galaxy toy line, there were 4 inch tall Explorer Power Rangers that came in the Fall toyline. The Explorer Rangers had special armor with the symbols of their visors were on their chests and the Magna Defender had his own as well. They each had special weapons and cool action features. They are the only 4 to 5 inch female figures to have armor.

Wouldn't it be cool if at least one female Ranger would get a Battlizer on the show? Oh well. I guess these toys did not sell at all, so Bandai America decided not to make any like them ever again.
Related Topic: The Life of 8" Power Rangers figures | The Infamous Battlizers | Power Rangers Mega Battles
Posted by Lavender Ranger at 8:47 AM