UPDATED 6/26/14
There has been Super Sentai titles or names for weapons slip into Power Rangers.

In the first season of Mighty Morphin Power Rangers (1993), you could clearly see the words Kyoryu Sentai Zyuranger (1992) on the morphers, with American footage, they had 'Power Rangers' on it, but some footage they couldn't change it.

You could also clearly see the Zyuranger title on the Pink Ranger's power bow.

Occasionally, graphics would slip and you could see Sentai terminology. For example, here in this clip used in Power Rangers Turbo (1997), you can clearly see the word 'Bowzock' which was the name of the kind of villains the Carranger (1996) had. Carranger was their counterpart. And if you believe this is a Carranger image, look at the bottom of the screen that says 'Fox Kids.'

And the reason the Psycho Rangers had 'N's on their buckles was because they were actually the Nejiranger of the Nejira clan.

The Quadroblaster's real name in Megaranger was the Multi Attack Rifle, I guess Saban and crew didn't think much to editing this.

Or this. Which are the Megaranger names of these weapons. 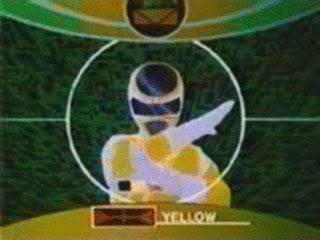 The only use of a Super Sentai logo in Power Rangers was the Bakuryuu Sentai Abaranger (2003) in the episode "Lost and Found in Translation" of Power Rangers Dino Thunder (2004). It was not said it was Abaranger but you could hear the Abaranger theme song in the background. 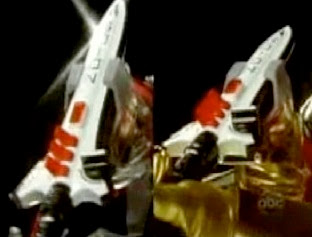 In RPM (2009), we see the word 'Go-On' on some of the weapons, the daggers of Silver and Gold and also Go-Onger on the Road Attack Zord. Go-Onger of course being Engine Sentai Go-Onger (2008). And the most obvious use of Go-Onger is on the bus Project Go-Onger. 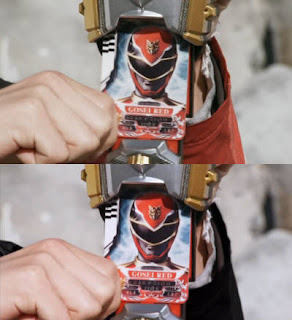 In Power Rangers Megaforce, we see the Gosei Cards from Gosieger with the Kanji and all, even with different names of the item.

I am working on the Common Locations of Super Sentai but I need to find pictures.

During RPM, a few things from Go-Onger can be seen (Go-Onger on Blue's Zord during a battle in the first episode), the entire "ENGINE SOUL" on the "RPM ENFORCER" bit for the first episode as well, and as well, the Valve Max Megazord has part of Lost Galaxy's morph in it, too. Compare a LG morph to the megzord's final attack: left, right, GO GALACTIC!

one was in your face
during In Space, the black and yellow rangers were sparring in a virtual world when they finished, in big bold text MEGABLACK and MEGAYELLOW scrolled right onto the screen :D

There were some from Time Force, In "Something to Fight for" with Time Robo in Jen's visor and "End of Time Pt3" with Dv Defender Wes' visor.

Then for Wild Force, a few times Gao-their respective color would pop up now and again.

And for Operation Overdrive, Gogo Drill & Bouken Red popped up in "Weather or Not". "Home and Away Pt2" had Neo Parallel Engine in the Flashpoint Megazord! A few times, Precious could be seen. And a couple times, Search Guard Successor was spotted! Mostly in the cockpit of the Megazord.