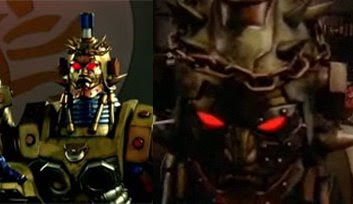 General Shifter / Yogostein
Yogostein was complex, he was rough and gruff big stronger boss but he cared about his cohorts Kegaleshia and Kitanedias. He was admired but also envied by Hiramechimedes. Shifter had a British accent and created some things, but since Venjix created him, Venjix considered he did it. Yogostein had a time where he thought he had to do things on his own and became crazed and obsessed. He supposedly learned his lesson but he really didn't and that's what lead to his end. Shifter was loyal to Venjix but Tenaya messed up one of his projects and Shifter was banished by Venjix. Shifter attacked the Rangers and got the PaleoMax to work against them and took control of Scott briefly. Shifter was destroyed by Scott and his spare parts were used to make a new body for Venjix. 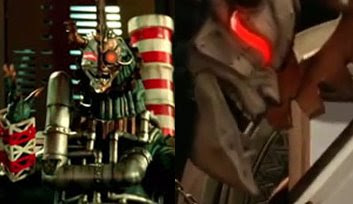 General Crunch / Kitanedias
Let's just put it this way... Kitanedias, even though he looks just like Crunch, would kick the living crap out of General Crunch. Kitanedias was way smarter and tough fighter. Crunch comes from a long line of gruff Japanese characters turned into idiots like Gluto and Choobo for example. Kitanedias was in charge of creating the sky robots, but they really didn't have sky-influence. He was later shut down but helped the Go-onger in the end. Crunch was a tough opponent against Tenaya in the end but was defeated in the end. 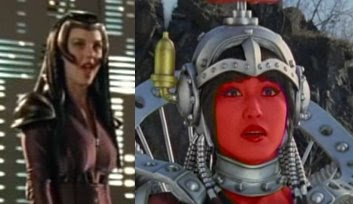 Tenaya 7 / Kegaleshia
Kegaleshia was a robot, just looked human and she loved her cohorts and supported them. She hated humans and hated being called 'old.' She grew giant once but was just swatted away by EngineOh G-12. Kegaleshia was in charge of the water robots. When the Gaiarc and Go-Onger needed to fight a common enemy, Kegaleshia joined Yellow and Silver as G-3, a girl-group... two times. Tenaya was believed to be a robot, but she discovered she was a hybrid and Dillon's blind sister. Tenaya had quite a personality, condensing of almost everyone. Once Tenaya sided with her brother Dillon, she was brainwashed into Tenaya 15. She planted the electro-magnetic bomb to activate the Hybrids in Corinth. Tenaya was then reverted with Dr. K's antidote and helped take down Venjix, thanks to Flynn's tough love. In the end, She, Summer, and Dillon went to discover the world. Kegaleshia helped the Go-Onger too but was shut down in the end. 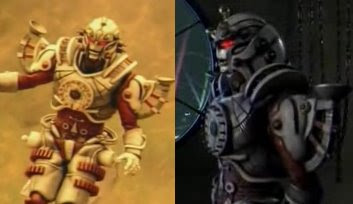 Venjix's first suit / Hiramechimedes
Venjix is an original creation, well some fans complain that he has the same name as the villain General Venjix from the episode "Forever Red." Hiramechimedes was a underling of Yogostein, the co-in charge of the Ground robots. He was very smart and cunning and he scared the Engines (the zords). Hiramechimedes got frustrated at one point and thought brains didn't count and tried to use brawn and died as a result. He later came back as a ghost. He also had a brother, who cross-dressed I might add but only appeared in a short OVA special. Venjix created a robot model that he possessed, even if it was destroyed, he made another. He later 'upgraded' and gave up on this particular look. 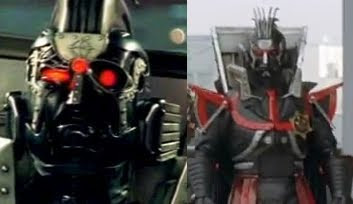 Kilobyte / Kireizky
Kireizky came in during Christmas, a follower of Yogoshimacriten and 'cleaned up' dimensions. He destroyed two dimensions and liked sucking things up with his 'cleaning' tools. He had 7 of them. Kilobyte came in much eariler in RPM and was a torn in Tenaya's side. He was a much more competent general and was a bit sexist, but I think he was beyond that, he probably was using it as a card against Tenaya. He was much more smarter and saw the big picture more than Tenaya did, Tenaya was just naive and got riled up by what he would say to her, not fully understanding what he was proposing. He was always one step ahead of her, knowing she would betray Venjix because of her 'human nature' and kidnapping and re-programming her. Kilobyte later felt ignored by Venjix, he had activated one Hybrid with his invention but Venjix had Tenaya activate all of them with their device. Kilobyte was finally defeated by the Rangers by the finale. Kireizky was destroyed after 3 episodes. 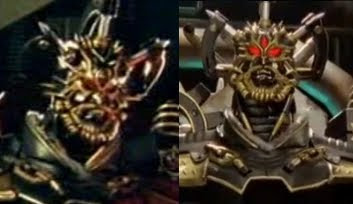 Venjix's second suit / Yogoshimacritein
Yogoshimacritein was Yogostein's father who came episodes later after his son was destroyed. Yogoshimacritein was the tough boss and didn't think much of his son. I found him like a last ditch effort to have a real villain as he came so late in the series of Go-Onger. In RPM, when Shifter was destroyed, Venjix got a new suit made of his destroyed parts. It was handled better in RPM. A tower fell on Venjix and the virus itself was trapped in the morphers, in a case.

Posted by Lavender Ranger at 8:56 AM

Venjix's 3rd body does look alot like that Yogsechirtan guy. and just like him he could delete (or whatever they called it in Go-onger) the rangers. and yes I know he didn't delete Dillon (go-on Black) or Ziggy (go-on green)but he did delete gem and gemma (go-on wings silver and gold) so yeah they are the same in some ways.