Similarities in Countdown to Destruction & Danger and Destiny 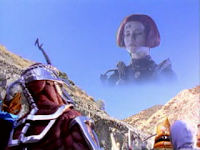 Villains from above
Astronema speaks to a bunch of planets from the sky to different people, for example to the villains and the earthlings on Earth. Venjix does so in the dome city of Corinth.

Dillon and Tenaya / Andros and Astronema
Both obviously has the Ranger and his evil sister, the evil sister gets cured in both two-parters but Astronema gets cured up to the end, and Tenaya mid-way between the first part. Both done so by their brothers and only their brothers. Both pairs fought but Andros and Astronema fought much longer than Dillon and Tenaya in the first part of the finale, just a tussle. 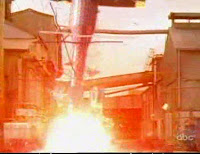 Main big boss taken down with another minion
Darkonda personally suicide-bombs himself into Dark Specter, but General Crunch is unwillingly dropped into Venjix, with the tower, crushing him physically. Dark Specter was taken down early in the first part and Venjix was near end. 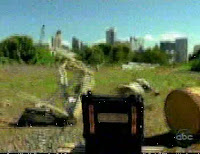 A Energy Wave
Okay, okay, the electro-magnetic wave in RPM happened in "End Game" and not in the two-part finale, but it was mentioned in the recap. It did effect the finale two episodes, that's for sure. Of course, we know the infamous energy wave that wiped out all the known villains caused by Zordon's death. I am not saying the two waves are the same, but you got to admit, both stories are effected by 'waves.' 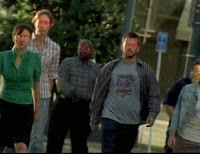 Both plots centering around mass populace
With In Space, the city of Angel Grove are taken hostage and stand up for the Power Rangers. The ones in RPM don't do this, but are an opposition to the Ranger as half of the populace are hybrids and are activated to go against the Rangers. The Rangers go and save some other hostages. 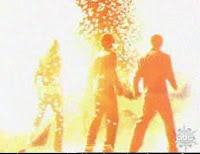 Fighting without powers
The PRiS Rangers must fight without powers in Angel Grove to not reveal their identities, while the RPM Rangers can't morph until a virus is put into Venjix because he might delete them. Well, this happens a lot in Power Rangers finales anyway. Remember the rain storm in Wild Force? 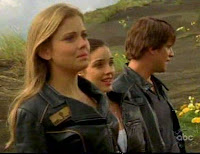 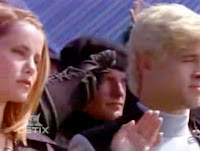 Brother, Sister & Lover?
In Countdown, the Rangers left Andros, Karone, and Zhane on KO-35, but they later came back on the Astro Megaship. In RPM, Dillon (the brother), Summer (the lover), and Tenaya (the sister) went on their own away from the gang to explore the world. It is debatable if Zhane & Karone were a couple or still romantically linked by that point. They had one episode before that alluded to romantic feelings. 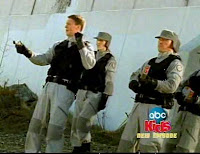 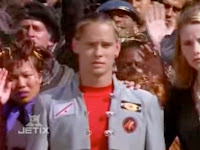 Rebuilding
In RPM, humanity really did have to rebuild all of humanity in fact. With In Space, the people of KO-35 had to rebuild their planet.

Stefan, I think they were just trying to end RPM. Maybe if they had more money.