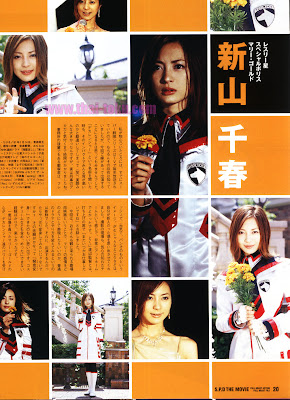 Marigold was one of the new characters in Tokusou Sentai Dekaranger the Movie: Full Blast Action. She was the romantic interest of Ban-Ban. She had the power to stop time. She is Deka Gold, briefly seen transforming in a flashback before being 'powered down.' She was a big sensation in the fan-dominion for a while.

Scan of a magazine, what first showed fans the first glimpse of Deka Gold. They cropped the image of Deka Gold and many believed that it was photoshopped, that it wasn't real. I like the color of the scan, that it is not gold, but a orangey-pink. It is a great color. The giant 'X' on her uniform is the roman numeral for ten. 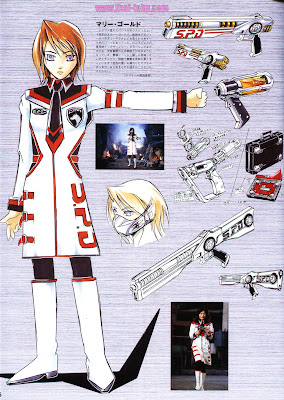 The sketches of all her props. D-Smasher 01 and 02 are her weapons, I think they should have been shown better. It is still a mystery to who was the suit actor/actress or if there was one. Or if the costume even still exists. We haven't seen the Dekaranger costume in any display. When the movie came out, there was a display case of her weapons and her red/white dress costume. 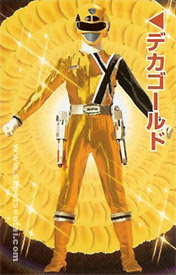 This is the scan that came from the final Dekaranger book, it was not seen in the movie. it looks like it is CGI, not a live-action picture or maybe it was treated. I like the gold coins in the back. 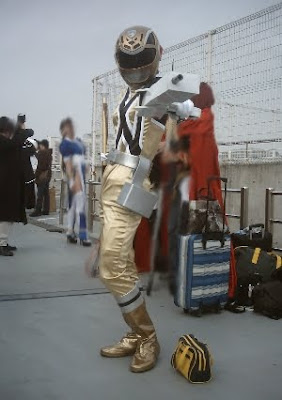 I love this fan-made cosplay suit. 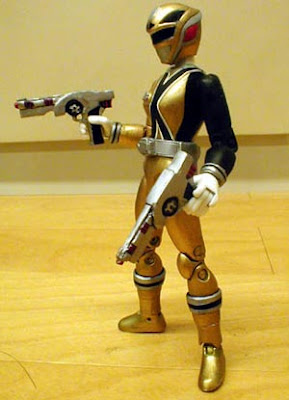