I got curious. When Lord Zedd was introduced in Season 2 of MMPR, we didn't see Rita's palace front view like we did in Season 1. We only saw a part of it, the balcony to Zedd's Chamber of Command. I used to think it was just random, they just made up the signs on it and it was in an arbitrary location. But looking at the above shots and the shot of the original Bandora's Palace in Zyuranger, it does have an actual reference. The Zedd balcony most likely was a miniature but well detailed. I like that they did different angles of it. 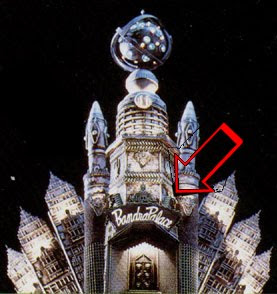 For those that don't know, Rita came from the Japanese show Zyuranger and Lord Zedd is an original American creation. So when the Japanese created the castle (Bandora's Palace), they didn't have Zedd in mind. When Season 1 of MMPR started, I always wondered what the name of Rita's palace was, it clearly had the word 'Palace' in it but the show would always speed up the footage so we didn't see it. As you can see the arrow, the chamber is suppose to be in the center of the building, to our left. The Saban crew did really pay attention and made the chamber balcony like it for Zedd. 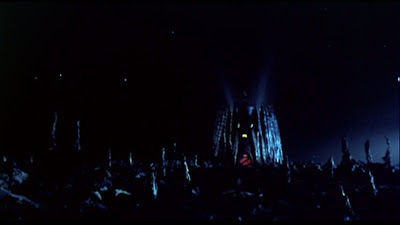 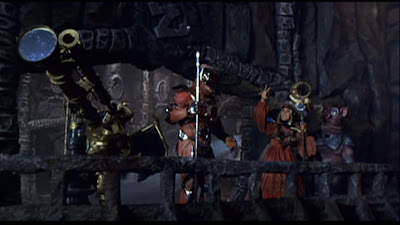 In the movie, the palace is reduced to look like a volcano stoop. It looks more like you expect Zedd's palace to look like if you only saw the balcony and not Bandora's Palace. The balcony looks more or less like the Zedd balcony on the show. The Zedd Palace in the movie looked like a prison. I thought some would find this interesting as well.

Great article, I always wondered this too. Like you, I thought they arbitrarily created a new location for Zedd to live in, but looking at the comparison it's clear they used Bandora's Palace with strong reference. Have you had a chance to read the BOOM! MMPR comic? It shows Rita hanging out in a lot of new locations in the palace, as well as what looks like Zedd's throne room with the large fan in the background. Love seeing what we saw as stock footage in the original series being expanded upon and given more context.