I, Lavender Ranger, have personally love the Macy's Thanksgiving Parade very much. I try to watch it every year. As a kid, I would fix my bed in a certain way to face the TV. Back in the 80's and 90's, syndicated channels would air animated Thanksgiving specials, including specials for toys, cartoon pilots that never made it. It was an interesting time. This no longer happens. The closest thing is the Monster High special on Nickelodeon on Halloween. Anyway, I digress. Power Rangers Samurai are reported to be part of the parade this year, most likely people in suits, not the cast or a balloon, but you never know. 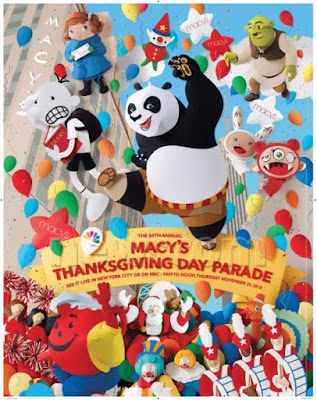 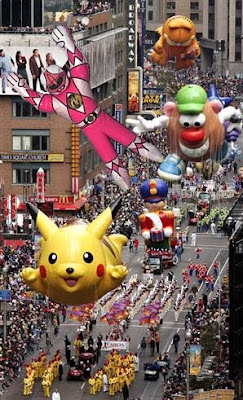 I made this photo manipulation, I made a bunch of them but I liked this one the most because it looked the most funny. For those that don't know, the parade airs at 9 am/8 am central on NBC network on November 25th, 2010.

UPDATE:
"the Rangers will embark on their first journey together as they escort the Planet Earth balloon through the streets of Manhattan."
-Networking Witches
Posted by Lavender Ranger at 11:31 AM

Sorry, but I had a minor heart attack before I read that was just a manipulation. I hope to the shinto gods that it's just them riding on a float and not giant balloons of the people.

Most likely a float. I don't think they will even get their own float, they might even just share with Nickelodeon-ites.