Power Rangers Samurai - I Got a Spell on Blue - Episode Review 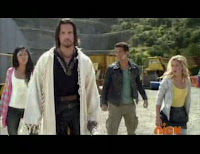 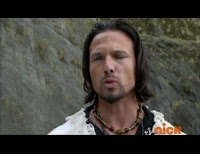 "I got a Spell on Blue"
It is a basic carbon cop of the Shurikenger episode, Jayden and Kevin spare and the Rangers think Kevin is best, but Jii says it is Jayden. A monster has the Tiger Zord and he puts a spell on Kevin. Jayden decides to fight Kevin on his own and is able to break the spell using a special disc. The others are bummed about Jayden fighting Kevin on his own, a mysterious stranger (Rick Medina in the same Juzo clothing!) explains even though it looks like Blue is winning, it is actually Red. Deker then disappears. Red fights the Tiger in his Lion and is able to conquer it. The four Rangers take down the monster and then the Tiger Samurai Megazord destroys the foe. 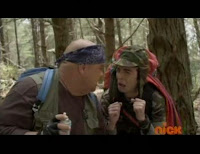 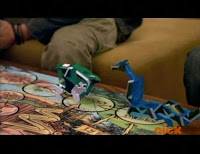 At the end, Emily, Mia and Mike play with their Zords on a board. Jayden and Kevin give a pep talk that is to be wise but they don't seem to be able to get it. Oh and Bulk and Spike have a subplot of camping in the forest and bump into the MotD. 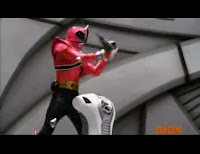 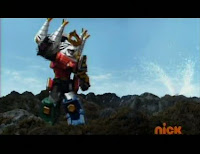 Episode Review:
I was waiting and waiting for Rick Medina would appear on screen and screamed when I saw him in the Juzo outfit. Juzo is his Shinkenger counterpart. The puns are rampant here and even Jayden's dialouge is infested with it. 'cool cat' and horrible lines like that. The monster is the most annoying, his lines and voice acting is deplorable. Being that it is the same exact plot of Shinkenger, the Shinkenger actors did better with the material. It's like having Filet Mignon and then having public school meat loaf. I can't really access Rick's acting right now though. The Zord game looked great though. I do give them points for alluding to killing Blue twice (the monster and Dayu), just like the counterpart, you'd think the censors would have gotten them for that. 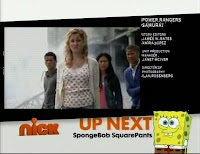 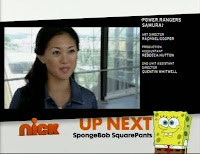 There didn't seem to be a 'Next time on' preview, they said there is new episodes every Sunday and showed clips of what seem to be the first and second episode (of Shinkenger) that we have yet to see. According to scheduling, the newest episode that premieres Tiger, Kabuto and Swordfish getting together in April.
Posted by Lavender Ranger at 12:22 PM

I absolutely laughed out loud when I read the "Filet mignon" reference. Lately, all Power Rangers Samurai has been is a carbon copy of Shinkenger. Hopefully, they show the actual adaptations of Acts 1 and 2 of Shinkenger next week. I'm trying to give them a chance though. I just hope they don't copy Goseiger ;_;

You know for the most part I did like Cole Dialouge as Decker. It seems like as decker he gives off a sense of joy of violence.

- The goatee helps a lot in terms of giving Decker a distinct look from Cole (and also the 10 years of age that Ricardo's put on since Wild Force).

- I have a feeling though that because of Ricardo's Ranger history, they're going to deviate from Shinkenger and come up with a plot device to separate Decker's human form from his Nighlok form (much like with Anton Mercer/Mesogog in Dino Thunder, even though that character didn't have a Japanese counterpart).

I watched Act 9 of Shinkenger just after seeing some clips of this, and found that most of the script is just a translation of Shinkenger's. It's uncanny. The two are so alike that I'll forget that I'm not just watching Shinkenger, and get caught off guard and put off by the script's small handful of commendably reasonable changes.

Well, I'm 100% sure I heard Rita's background music during the Sanzu river first scene! And about Ricardo, well, it bothers me having an old actor playing a new character in the same show. It's not different from Renee Naufahu. He's Gruumm and Ricardo is Cole. Though I don't like their original characters, they've been there, and if they gonna bring the actor back, bring him as the character he played in 2002 (or 2005).