Pictures of Gokaiger Goseiger Super Sentai 199 Hero Great Battle, which was to be released in May 21 but it has been postponed to a yet-to-be-announced date because of the Earthquake and Tsunami. Now confirmed to be released June 11, 2011.

This the biggest news, 10 other heroes with Big One and Aka Ranger. (Left to Right) Signalman (Blue Senturion), BullBlack (Magna Defender), MagiMother (White Mystic Ranger), Wolzard Fire (Koragg), Shinken Red, Deka Master (Shadow Ranger), DekaSwan (Kat Ranger), Zuuban (Sentinel Knight), Mele (Camile), and Rio (Jarrod). Making only 10, plus the other 187 in the Ranger War, making 197. GokaiSilver is 200, so we need two more. I hope they are not counting Big One and Aka Ranger as part of the 12. I do shut my lips about Rio and Mele not being counted, making fans happy. Not having DekaBright, they are probably only counting warriors that appeared in more than one episode (hence no GoseiGreen). I am hoping Mask X-1 makes an appearance.

Even though the suits are obviously filled with other people, there is a funny trend with which suit actors originally played these characters: Yoshinori Okamoto played Big One and Signalman (2 of the 12). Yuuichi Hachisuka played Shinken Red (Karou), Mele, and MagiMother (3 of the 12). Hideaki Kusaka played DekaMaster and Wolzard Fire (2 of the 12). The others weren't shared by the same person. Shinken Red, DekaSwan and DekaMaster are the only ones to be called 'Rangers' in Power Rangers. MagiMother, ShinkenRed, DekaMaster and DekaSwan are the only ones to have the first word of the team in their names like the main team members. And all of above had toys except for DekaSwan. Mele had a toy in America thanks to Jungle Fury and Wolzard's toy was only in purple (Power Rangers had one in the other version). 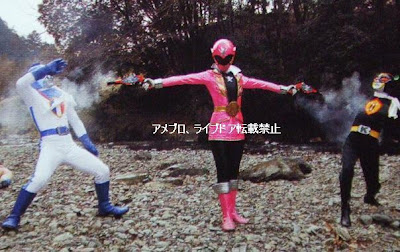 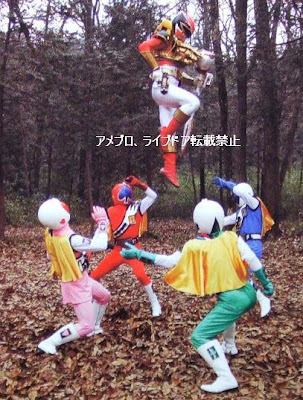 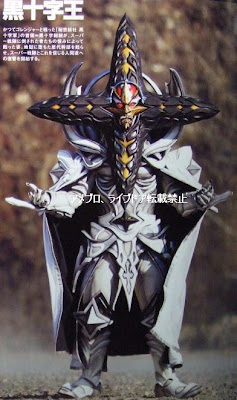 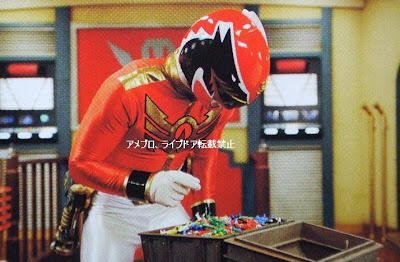 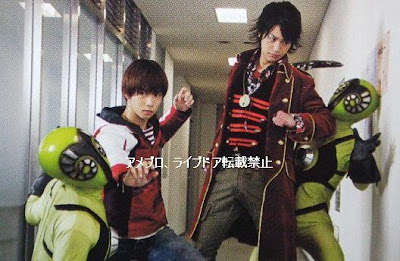 Alata and Marvelous vs Bibis 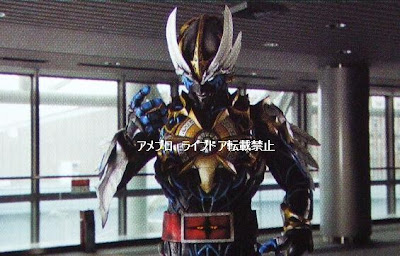 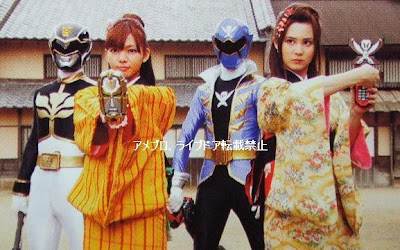 Moune and Luka transform in front of Gosei Black and Gokai Blue. 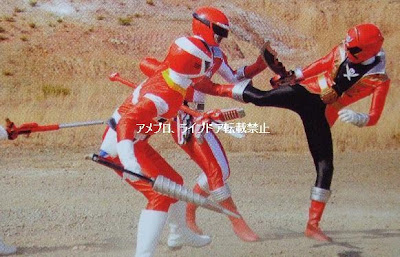 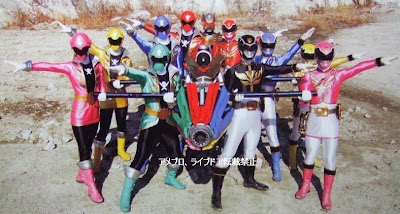 Goseiger and Gokaiger and a new cannon.

After going through all of my files, I've noticed that there are currently 197 confirmed heroes of the 199.

I kid you not, I giggled when I saw those pics. Funny that the Gokaiger and Goseiger are fighting the older heroes. On Henshin Justice, someone said that the old heroes are actually Zangyack soldiers. If that's the truth and the oldest heroes we see are the Goseiger, I'll live. There should still be a Gokaiger vs. Super Sentai. Of course, these are just a few pictures. Have to wait and see the film. :)

This is AWESOME!!!! And Luka, you've just give me nosebleed, again....

yeah I am happy with the ones selected, I just hope we don't get coped out on the next two.

This is gonna be BADASS. :D And seeing Zubaan and Signalman just made me grin.

Maybe the remaining two are just Aka Red and Gokai Silver (who will be the 199th, and not the 200th as everyone is speculating). I would love to see X-1 Mask and Ninjaman again though.

Dig the new design for the Black Cross Fuhrer.

Anonymous 2, I think Gokai silver will be the 200th, I expect the other two will be Akared and either Ninjaman, Deka bright or X-1 mask.

I agree, probably either Ninjaman, AkaRed, DekaBright and/or X-1 Mask will be counted KR ShinkenRed. I think most likely it will be X-1 Mask and AkaRed. X-! Mask being the counted as a sixth ranger prototype in the Boukenger 30th anniversary encyclopedia and AkaRed having a cameo in Episode 2 of Gokaiger. DekaBright is unlikely since she only appeared in one episode and DekaGold and GoseiGreen seem not to count. And Ninjaman, for some strange reason doens't seem to be counted, as I consider him in the same spot as Signalman.

the remaining two has to be either of these:
akared
X-1 mask
deka bright
ninjaman???
these two are unlikely i think: deka gold and gosei green

So doesn't this pretty much confirm that Mele is Super Sentai's first green female senshi in history?

Fantasy Leader, I guess so, but seeing that Wolzard isn't count as the first Violet Senshi, she is just an 'extra hero', just like Signalman is not counted as a second blue warrior.

This is so awesome! Seeing the female ShinkenRed to be a part of this group is just awesome.

Also, Rio and Mele being a part of this confirms that they are indeed heroes.

your poll needs to be fixed your for got gunmajin

So Goseiger gets a team up but Magiranger doesn't. Not fair dude.

And I love the Gokai Pink photo. It's like "Don't try your pick up lines on me!"

To Shinken Saint's last comment, it's great to see her again, especially henshined (I just saw Gosei vs. Shinken and Takeru is the only Shinken Red to be seen). However, she does look weird :D. Seriously, compare her to either the Warriors with the heavy armor costumes or to Aka Ranger and Big One, with their oversized helmets. It's not a complaint, it's just funny to see all the extra heroes with sculpted costumes with Big One and Aka Ranger then see Kaoru, who's only different because we've seen Takeru as the series' Shinken Red for about 45 episodes before Kaoru came. Just my opinon. I can't wait for this film and I'm not grumbling about the choices for the new 12 unless Aka Ranger and Big One are counted in that number. :)

Is it true that the movie may not happen now due to the earthquake?

TheDoctor, it'll premiere, un-determined date. They won't say but I think the film isn't done yet but I am sure it will. Since we already have stills, I am sure they filmed most of it. Maybe its almost in post-production.