One fan spoke of mecha belonging to heroines being feminine or masculine. I will refer to Mecha (how Super Sentai fans refer to the zords) as zords for shorthand. Most zords back in the day where shared female and male. So we'll only look at the ones that were just female. Believe it or not but feminine and masculine are subjective social norms, so it is all subjective, it could change or be different, we can have other opinions. My opinions might not be yours. To some people, feminine and masculine are opposites, to me there aren't.

Now, why is it important for a zord to look feminine if it is meant for a woman? I suppose because of social cues, if something is meant for a man, than it is to look 'masculine' and something for female, meant to evoke 'feminine' social looks. It doesn't really matter to tell you the truth. And since mostly boys by the megazords, they wouldn't want one part of it too look too 'girly' hence why most of the zords belonging to Pink Rangers aren't completely Pink (check post below).

The first pink mecha ever was Mask Pink's helicopter in Maskman (1987). I guess it is kind of feminine. Helicopters are culturally attributed to military and police, which is originally seen as masculine. Even with the pink stripes, doesn't really look 'feminine' to me.

The Turbo Pink's Wagon in Turboranger (1989) was all white with one single pink stripe. Wagons are usually connected to mothers, a feminine thing, so I guess the mecha looks feminine.

Jet Swan of Jetman (1991), which belonged to White Swan. Swans are usually seen as feminine, so yeah pretty feminine.

The most famous and known mecha is the Pteradon/Pterdactyl Zord of Zyuranger (1992) and Mighty Morphin Power Rangers. With the red and pink, it looks feminine, and birds are usually seen as feminine.

Star Phoenix / Firebird Thunderzord of Dairanger (1993) is bird-like, so feminine.

White Kark/White Shogunzord of Kakuranger (1994) is a white and acts sort of feminine, its suit actor (in Japan) was a woman.

God Kark/Crane Zord of Kakuranger (1994) is a white bird with pink trim, again seen as feminine. Cranes and Swans are seen more feminine than phoenix. 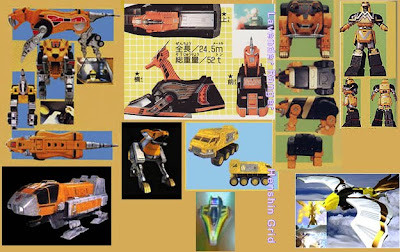 Here are zords that were originally meant to be for males, NOT for females. So they might be more 'masculine' than feminine and fans have complained through the years as to how they didn't really make sense or match.

Sabertooth Tiger was the first, and we kind of accepted it as feminine, it matched pretty fine with Trini. And since in America (Don't know about Japan, maybe the same), cats are seen as feminine.
Griffin Thunderzord was originally Kirin, the Kirinranger of Dairanger was male but sort of feminine. It was renamed a Griffin and I guess it looked feminine.

God Kumard and Yellow Kumard of Kakuranger, Yellow Kumard/Yellow Shogunzord looked more masculine because it was meant to be. God Kumard/Bear Ninja Zord looked feminine, but I have heard less complaints, since bears are seen as cuddly as teddy bears.

Wolf Galaxy Zord was meant to be for a man and it is the most complained about, that it didn't really match for Maya in Lost Galaxy.
Yellow Armor/Haz Rescue is a construction vehicle, I guess can be seen as masculine. The Yellow Omega zord, can go either way.

The Time Jet/Time Flier, eh, they are look the same to me.

The Eagle zord in Wild Force, could go either way too. 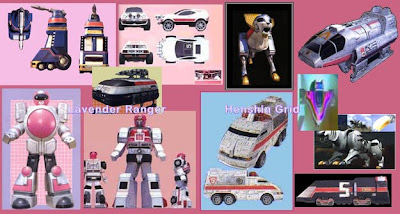 Moa Loader of Ohranger (1995) / Zeo Zord doesn't look either female or male to me.

Pink Blocker / Pink Super Zeo Zord looks very familiar, not only because of the pink but the roundness, because of social and cultural cues.

Pink Vehicle of Carranger (1996) / Wind Chaser of Turbo seems kind of feminine I suppose because of the colors and how it is small and compact.

Rescue Fighter / Wind Rescue looks feminine to me, probably because of the colors and its form.

Tank Voyager of Megaranger (1997) and Power Rangers in Space, it looked sort of feminine because of its shape.

Gingat of Gingaman (1998) / Wild Cat Lost Galaxy Zord looked feminine I suppose because of its style and that it is a cat.

Pink Aider of GoGoFive (1999) / MedRescue Five of Lightspeed Rescue I suppose it is suppose to look feminine by its colors and how it is suppose to evoke the look of a nurse and most nurses seen as female.

Go Liner 5 / Rail Rescue 5 is neither female or male.

The Pink Time Jet of Timeranger (2000) / Time Flier can go either way. It's neutral.

Gao Tiger/Tiger Wild Force Zord, is neutral, it was just black and white but since most people see felines as feminine, I guess it can be seen as feminine. 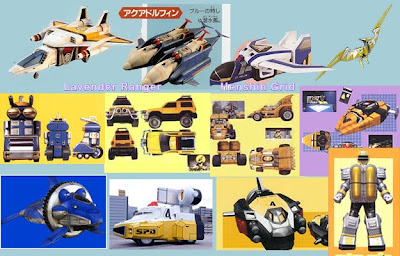 Mask Jet of Maskman (1985) looked kinda feminine, I suppose. It is really neutral looking but meant to be for a female.

Blue Swallow (1991) looks sort of female as most aviary is looked feminine.

Dogu Loader of Ohranger (1995) / Zeo Zord doesn't look either female or male to me.

The Yellow vehicles (too lazy to look for names) in Carranger/Turbo were meant to be for females, but look sort of masculine to me.

The yellow Voyager vehicle of Megaranger/In Space looks feminine probably because of its shape.

Pteradon from Abaranger/DT looks feminine, with its feet, look like women's boots. In Abaranger, the dinos spoke and this one had a woman's voice.

The yellow vehicles (too lazy to look up names) of Dekaranger/SPD look masculine, meant to be for a female. 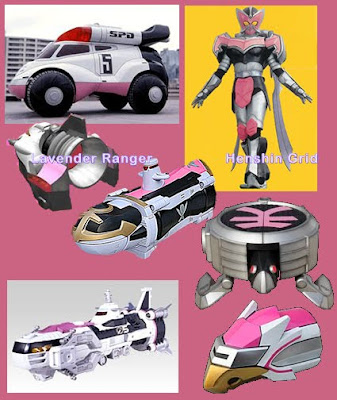 Patsigner of Dekaranger (2004) / Delta Runner 5 of SPD I suppose looks feminine because of its shape.

Patwinger 5 / SWAT Flyer 5 I suppose looks feminine because of its shape.

MagiFairy of Magiranger (2005) / Sprite Titan of Mystic Force was very much feminine because of style and how the suit actress acted.

Kami Origami of Shinkenger (2009), turtles don't really evoke 'feminine' in our culture, maybe in japan--I don't know, so the zord is a bit demure but looks neutral to me.

The Phoenix Hedder of Goseiger (2010) looks feminine because of colors and shape.

Gokai Marine of Gokaiger (2011) is a submarine, I suppose because of colors and shape looks female. 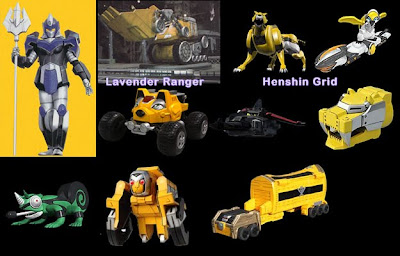 Magi Mermaid/Mermaid Titan is very much female, because it is a mermaid and the boobs and how the suit actress acted.

Many say the bulldozer of Boukenger/PROO was too masculine for Natsuki.

Geki Cheetah doesn't look feminine to me, but I suppose to the shape of her head. And the penguin for sure looked feminine because its short and cute looking and has heart-shapes on its headphones and skateboard.

Rin Chameleon, was small and the first zord for a villainess that went along with the heroes' zords that was also sold as a toy. I suppose it looks a bit feminine with its style and size.

Jetoras was supposed to be male in Go-Onger, it spoke and was a guy. Looks more masculine than female, but belonged to a girl.

Monkey Origami/Ape Folding Zord looks sort of feminine by its shape, but it could go either way.

Tiger Headder of Goseiger (2010) looks neutral to me, could go either way.

Gokai Trailer of Gokaiger (2011) is a semi-trailer truck and looks neutral, either way, I suppose because Luka is tomboy, they didn't mind either way if it looked feminine.
Related: http://henshingrid.blogspot.com/2010/03/shades-of-pink.html
Posted by Lavender Ranger at 12:00 AM