Build-A-Bear/Power Rangers Team Up For The Holidays

The following is thanks to Bender/Helper Impact as always, they send me this fabulous news like this via e-mails, this time by Nicole Yavasile (thank you!): 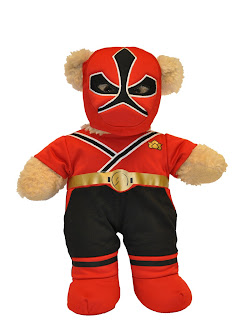 LOS ANGELES (October 4, 2011) – Hot off the success of the #1 kids action series Power Rangers Samurai, currently airing on Nickelodeon, comes a fun, new costume exclusively available at Build-A-Bear Workshop® beginning October 7.  Just in time for Halloween, and based on the latest incarnation of the enduringly popular Power Rangers franchise, the Red Samurai Power Ranger costume has been designed specifically by licensee Build-A-Bear Workshop to fit bears and other furry friends.

“We are thrilled to announce the addition of licensee, Build-A-Bear Workshop, to our growing roster of partnerships,” said Elie Dekel, President of Saban Brands. “Halloween is a great time to inspire the hero in everyone and we look forward to growing brand awareness for Power Rangers Samurai with the Red Ranger costume debut at Build-A-Bear Workshop.”

“We couldn’t be happier that Power Ranger fans are now able find Red Samurai Ranger costumes for stuffed animals in Build-A-Bear Workshop stores across the country,” said Build-A-Bear Workshop Chief Entertainment and Digital Marketing Bear, Teresa Kroll.  “We are confident that the Red Samurai Ranger costume will be one of the most popular items for our customers this Halloween.”

Posted by Lavender Ranger at 7:25 PM