Sailor Moon has slowly made a return outside of Japan

I know I usually discuss live-action here in Henshin Grid, but I know I will get more hits if I post this here than postin this on my regular blog Spanengrish Ramblings. Some Toku fans are Sailor Moon fans. I've been a fan since its American premiere in 1995 and went through the ups and downs of the show DiC version being canceled, being left with a cliffhanger between Sailor Moon R, then years later Cloverway dubbing the series. Anyway, now Sailor Moon has name recognition and 2012 is soon the 20th anniversary in Japan since the first Manga issue came out on Kondasha in 1992. 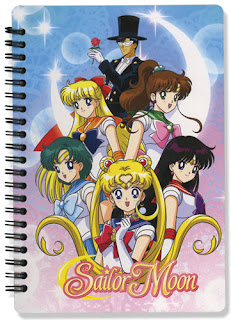 Few months ago, Kondasha US announced the Manga would be re-published in America and Sailor V and Sailor Moon 1 came out in September. Also, Great Eastern has listed trading cards, notebooks, stickers and other items to 'come soon.' Toei took away the license in 2001 for the US and stop airing the Anime series in the US. Now Toei has been slowly letting go the license all over the world. For example in Italy, they have been re-airing the Anime series and coming out with new merchandise and dolls. In Mexico, DVDs of the dubbed series will soon be released, including menus with the Mexican voice actresses (like the one that did the original Lisa Simpson voice in Mexico). The Italian, Mexican and new US merchandise have a new logo (which is the one above), which is not the one that DiC used. 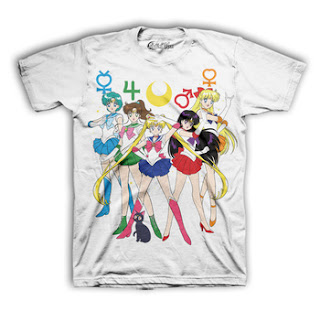 New T-shirts have been coming out at Hot Topic, so far for women. Hot Topic has announced men sizes to come soon. I am sure to get one! They are from Hyper Apparel. Other than the Manga, nothing has been announced YET about the Anime in the USA. So maybe in 2012 I suppose, there will be new stuff. Merchandise is great because it grows the brand and I think that judging by the sales of the merchandise, it would encourage Toei to releasing more like DVDs. What I would love more would be better dolls than what Bandai America came out with and what would be more awesome would be re-dubbing the original Anime. But most likely Toei and DiC will release the original North American dub on DVD. What I would love more for 2012 is Toei doing a new Anime series reboot and then dub that in America. I would love to see it on Adult Swim at 9pm. 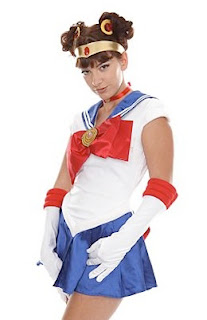 Hot Topic also has the costume for $60. $60??!! I would not pay that much, if I was a woman, for the above costume. If a wig came, it would be better. Also, Noah Berlatsky of The Atlantic has written an article asking if Sailor Moon can break up the male Superhero club and also mentions Wonder Woman and Buffy, who both currently have comic book titles out. I love Sailor Moon but they couldn't break the boy's club in 1995 and I doubt she could do it again, but Sailor Moon now has name recognition, so who knows? More soon!