I covered Super Sentai, might as well do Kamen Rider. The first Kamen Rider was 98 episodes and the rest of the Showa era was pretty small episode counts save for V3, Skyrider and Super-1. Black and Black RX aired way later. As for the current era, 49 episodes is the highest episode count and 51 being the highest series has gotten. Decade is the shortest of this era and Amazon is the shortest of the first era. There is 52 weeks in a year so it makes sense most series are 52 or less. Don't forget that some weeks there are no new episodes because of Golf, a national holiday or a travesty like the recent Earthquake in Japan. Here is a chart... 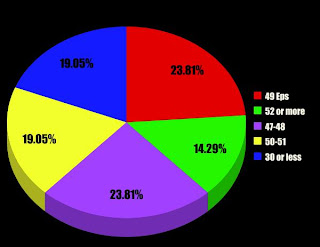 Posted by Lavender Ranger at 12:11 AM

i think toei count zx officially as 1 episode, instead of just a tv special

KidR, I forgot it, I'll add it later.