UPDATED 1/23/13
I am obsessed with the Ranger Keys of Gokaiger. I am not the only one, fans are already debating over how Bandai America will handle the Ranger Key situation as the Bandai Japan treatment has been a double-sided sword if one was willing to get the whole team sets and now we find out that in 2012 we will be getting team sets. And there is too many Red Ranger repeats if one buys the complete Gashapon sets. The Rangers they pick have been very random. 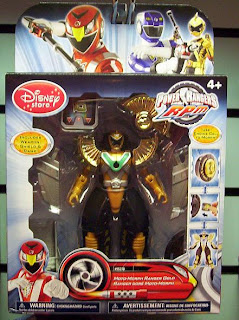 If anyone was collecting the Engine Cells of RPM, one couldn't get them all. They release some keys with armored figures but they didn't release all the Engine Cells. And as for the Power Coins, they did release them with the MMPR 2010 Ranger figures. And in the Samurai line, we got most of the Spin Discs. 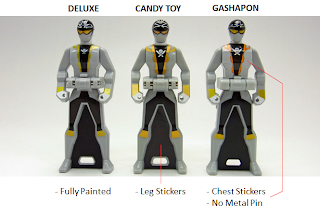 Footage from Gokaiger will get adapted into Power Rangers Super Megaforce but we don't know if they will be using trhe suits. But the Ranger Keys do appear in the headquarters of the Megaforce, so hopefully we will getting the Ranger Keys in the toyline. I made the count of 125 keys (adding the five American-only PR Rangers, it is 125) instead of 199 (from Super Sentai), maybe Bandai America has more of a chance of covering at least 2 of each team. Bandai Japan released all 35 Red Ranger keys (obviously it would be red) in deluxe form, but the Red Ninja key was release with a treasure box. 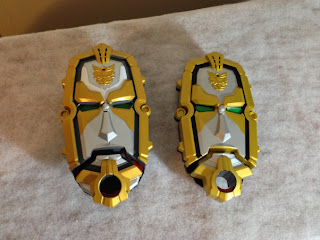 [Picture from http://shukuenshinobi.com/megaforce-vs-goseiger-toy-comparisons/tensouder-vs-gosei-morpher/]
It is safe to say that Bandai America won't have the three types like Deluxe, Gashapon and Candy Toy, most likely just one or two types. Judging by the Gosei Morpher, which is smaller than its counterpart the Tensouder, the main PR keys might be smaller than the Japanese ones. might be smaller since most toy morphers are smaller than the Sentai versions. A second type might be a none transforming one for the Training Sets. 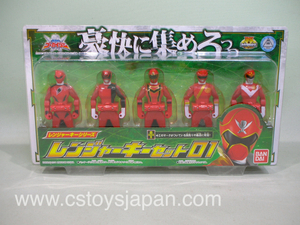 The Ranger Keys that Bandai chose were obviously based on the first auxiliary zords: Magiranger, Dekaranger, Magiranger and Gekiranger but always mixed it up with one older Ranger. But then they were all random. The Mobirates comes with Red and other Reds: Go-On Red and Shinken Red, most likely the American one may just come with the Red key since the Spin Sword only has the Red Fire Disc and the RPM Cell Shift Morpher only came with the blue cells. 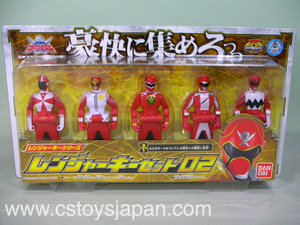 Most likely might not release Ranger Keys in sets by themselves, mostly like with a figure. They could do like the Samurai Auxiliary Zords, they come with a figure. Gokai Sabre comes with Yellow and Gokai Gun comes with Blue. Pink and Green came with the Buckle, most likely the Buckle will come in some sort of Training Set, sans Pink's Key. Since the Mystic Force's Mystic Sword came with only the Red, Green and Yellow attachments without Pink and Blue, so maybe the sabre will come with Green. 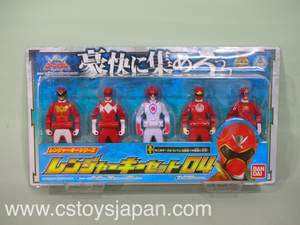 If they do follow the sets, they might release Jungle Fury, SPD, Mystic Force, and Wild Force Reds; Lightspeed, Dino Thunder, Operation Overdrive, and Lost Galaxy Reds; Megaforce, MMPR, Ninja Storm, and Turbo Reds. That's 13 out of 19 right there, leaving Aquitar, Zeo, Space, Time Force, RPM, and Samurai (if RPM and Samurai don't come with the Mobirates equivalent). They could make 4 sets right there. The Gokaiger set 3 by the way was Goranger so maybe they will make a MMPR set. 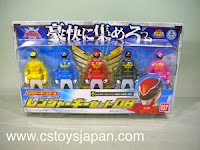 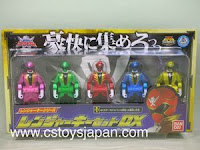 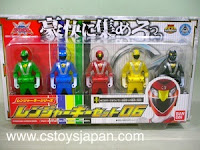 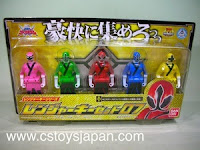 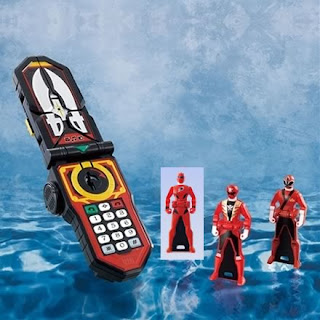 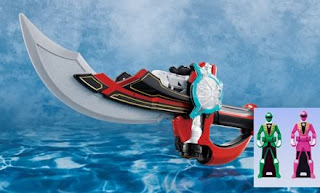 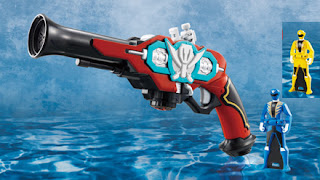 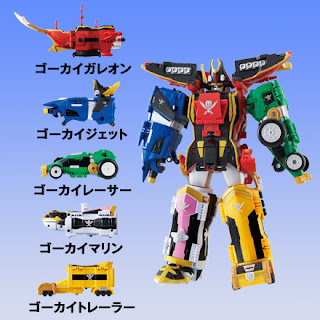 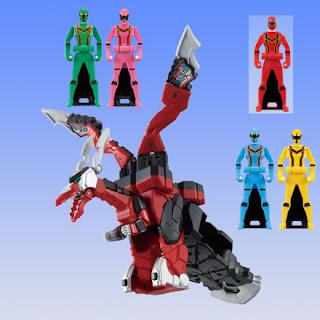 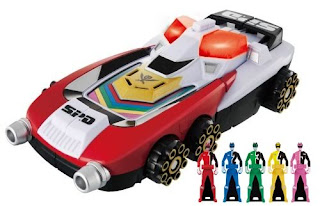 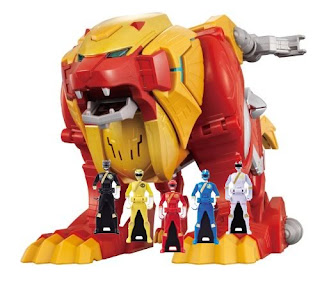 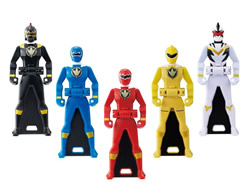 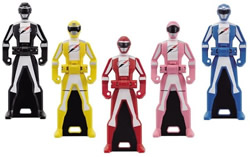 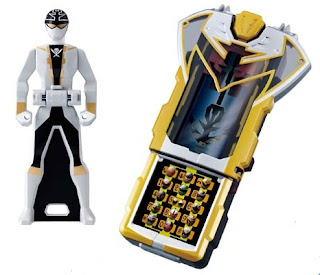 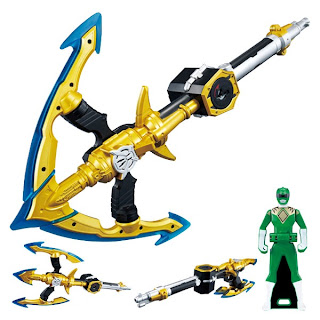 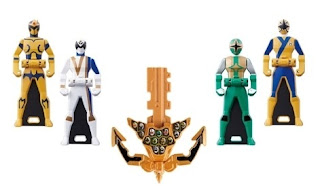 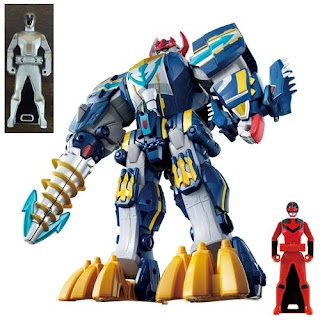 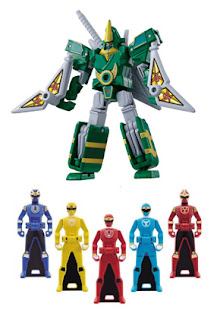 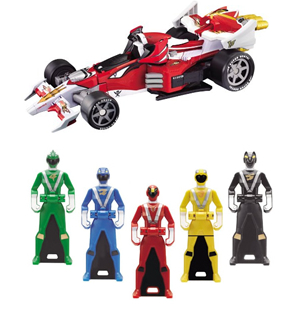 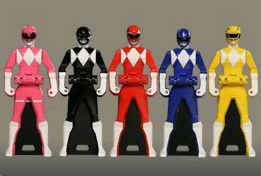 Posted by Lavender Ranger at 11:55 PM

Wouldn't Pirate Blue come with the Saber and Pirate Green come with the Gun, since those are their primary weapons, not the other way around?

sure, okay i changed it.

I think when you changed it, something funky happened with the coding. On the main page, it cuts off after the stuff with pink ranger keys and goes right into the next article. And on the article page, it's got all the sidebar stuff under the article, and still cuts off.

Dessa, it was because of the charts in the new posts. I fixed it, press 'read more.'

I think they might release. The weapons in packs and the 5faucets pirate keys will come with the morphed.