We can't count Goranger and JAKQ because Goranger lasted 2 years and had 84 episodes and was the first one, so they didn't know it was going to last 35 years. JAKQ was not as possible and lasted 35 episodes, ironically because that is how long in years it was lasted. In 1978 there was a break and then in 1979, Battle Fever J aired and had 52 episodes. It seems that Gokaiger will indeed have 52 episodes, since Go-Buster will premiere in late February. There is 52 weeks in a year so it makes sense most series are 52 or less. Don't forget that some weeks there are no new episodes because of Golf, a national holiday or a travesty like the recent Earthquake in Japan. Here is a chart... 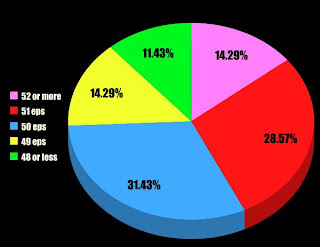 Posted by Lavender Ranger at 11:25 PM

Actually, Gokaiger only has 51 episodes.