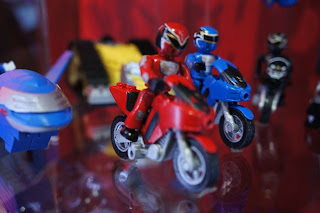 Rangercrew went to the International Licensing Expo, where they showed off new MegaBloks toys. I am not going to post all the pictures just in case I get in trouble with MegaBloks or Saban Brands. But what was curious was they had three figures with bikes. The figures had different suits than the usual ones. Now this could be just toy only, but with Samurai, they pretty much stayed show-accurate, except for the racers. But these cycles look more specific. And with the Samuria figures, they don't have any modes haven't seen the show (save for the Blue Ranger with the black vest---which is based on Sentai's Gedou Shinken Red). 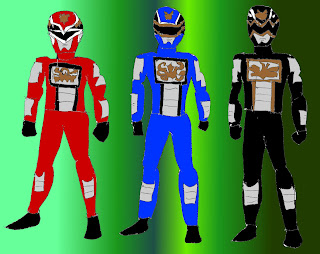 Could these be like Mega Mode of Power Rangers Samurai? Of course I drew these (above) based on what I can see from the pictures, most likely IF it is in the show, it would have more armor and detail. Now these could just be for the MegaBloks toys. These look a lot like motocross suits. It could be possible that IF these are in the show, they would only wear them when they ride their bikes, like Tiger Ranger in Jungle Fury.
Posted by Lavender Ranger at 11:23 PM

If they are some sort of special gear, lets hope they come up with a better name than "Mega Mode". Stick that with "Megaforce" for Megaforce Mega Mode and you're just asking for trouble.