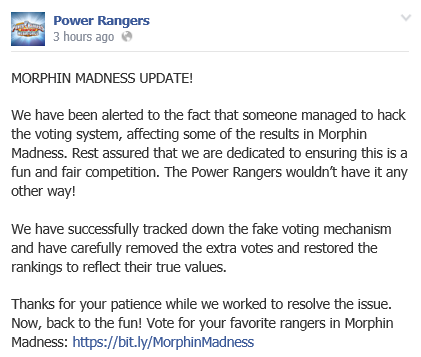 Power Rangers Facebook posted this, I also received a similar message via Power Force:
"We have been alerted to the fact that someone managed to hack the voting system, affecting some of the results in Morphin Madness. Rest assured that we are dedicated to ensuring this is a fun and fair competition. ...The Power Rangers wouldn’t have it any other way!

We have successfully tracked down the fake voting mechanism and have carefully removed the extra votes and restored the rankings to reflect their true values. Thanks for your patience while we worked to resolve the issue." 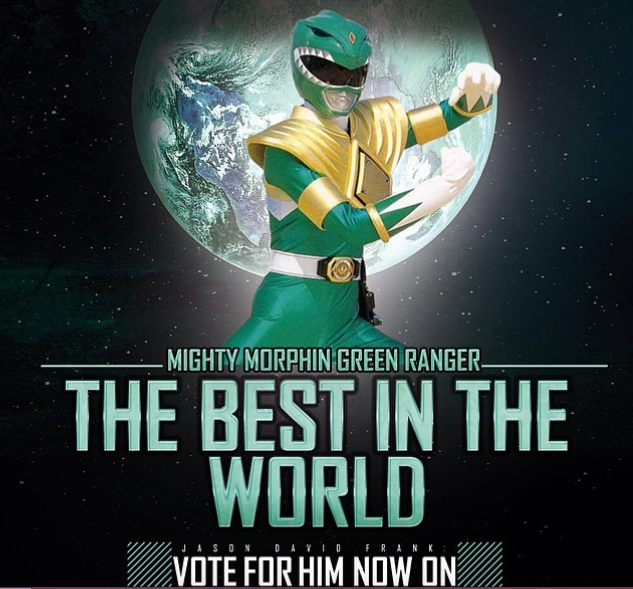 But the controversy is that the votes were raised up to favor Tommy Rangers and now when 'fixed,' the non Tommy Rangers were lowered and the Tommy Ranger votes remained the same. Before this hacking even happened, some fans were upset that JDF (Jason David Frank) was trying to push for his Rangers to win. When most people voting in Morphin Madness wanted Rangers that didn't have Ranger Keys yet. This has divided fans into two sanctions of Tommy Lovers and Tommy haters. And we all know most Tommy Rangers will have keys, except maybe for White Ranger, it is still unknown. So far Red Zeo Ranger Key is available in both Red Zeo Zord and Zeo Multipack, Red Turbo Ranger Key in Turbo pack, Green MMPR Ranger is to be available soon and Black Dino Thunder Ranger is said to come in the upcoming Dino Thunder pack.
Some fans have said that Morphin Madness is a waste of time. This has fan flames much more to say it is a waste of time. Some fans that have voted for Morphin Madness think that Round 3 should be reset and vote again to truly be fair. So I don't know how I felt about this. I thought I stay away from this whole thing but with Power Force telling me about the hacking, I thought I would at least report it or whatever.

I don't blame Jason David Frank for this, I actually blame the hackers who hacked the site and made Tommy the winner.

Well the online tournament is isn't over yet!

I disagree with the notion that everyone against Tommy in this controversy is a Tommy hater. I like Tommy and have voted for his Dino Thunder incarnation all throughout the poll, but JDF's actions were, in my opinion, very immature. Bribing fans with free autographs just to win an online popularity contest that amounts to nothing except for the one set of keys the winner gets is way below him, especially when you consider the fact that he was winning by a landslide anyway before he started posting. *That* is why people ballot stuffed massively against him.

I also find it ridiculous how they call it "hacking" and not only take away tens of thousands of votes from extremely popular characters like Jen and Jason, but also bump all the Tommys by like 3000 votes each. Where is the evidence of this so-called "hacking"? If anything, it was JDF who told his thousands of followers on facebook to delete their cookies and to vote for him multiple times.

Besides, what about those of us who didn't grow up with Mighty Morphin, and thus don't really care about Tommy? What about those of us who have watched every single season and genuinely prefer the other characters over him? Are we haters too? This fandom is a very diverse community that spans through multiple generations, so for these Tommy fanboys to be calling us haters (an many other horrible things, just check out the Ranger Command podcast) is an insult to not only the clear majority of us, but also to the very essence of the show and the values it tries to convey.

So no, I don't agree with JDF's legion of near-religious followers, no, I am not happy with how a fun little game turned into mass hysteria that led to people to call each other racial slurs, and yes, I do believe this is all 100% fault of JDF's overreaction.

Not that any of this matters anyway, we all know from the start green Tommy would annihilate every single matchup.